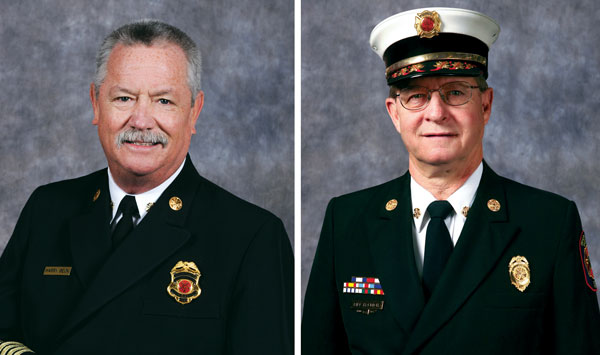 Winners (selected by a committee appointed by the IAFC) are honored for their leadership, innovation, professional development, integrity, and contributions to the fire service as a whole. Sponsored by Pierce, the 21st annual awards will be presented on August 18 in San Antonio, Texas.

“Every year, I look forward to learning who the IAFC committee has chosen for these incredible honors,” says Jim Johnson, Oshkosh Corporation executive vice president and president of the Fire & Emergency segment and Pierce Manufacturing. “Both Chief Harry Beck and Chief Bill Halmich remind us all of the extraordinary impact that truly outstanding leaders have on the communities they serve, as well as on the advancement of the fire service. All of us at Pierce congratulate Chiefs Beck and Halmich!” 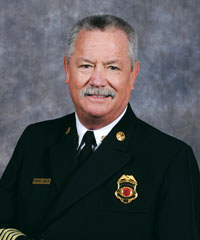 Chief Harry Beck, who has devoted more than 40 years to fire and emergency services, began his career with the Phoenix (AZ) Fire Department, where he rose through the ranks to the position of deputy chief. He joined the MFMD, located in the nation’s 38th largest city, as chief in 2003. Known as a progressive team builder and innovator, Beck’s accomplishments with the MFMD are far reaching and reflect a leadership style that fosters empowerment and collaboration.

As chief, he established a five-year strategic vision that guided the department through financial challenges during the Great Recession. Beck led efforts in developing innovative processes—through partnering with health services organizations—to deliver fire service-based EMS that has set an example for the state of Arizona and that have the potential to revolutionize it on a national basis. Through this process, Beck was able to secure a multiyear Healthcare Innovation Grant totaling $12.5 million to enable the MFMD to expand programs to provide more efficient and effective emergency response for those who call 911 for help. He coordinated with the United Mesa Fire Fighters to lead the development and implementation of improved services for first responders, including PTSD awareness, life stress and addiction awareness, and resiliency training. Earlier this year, Beck secured funding for a new MFMD dispatch center and city emergency operations center. Recognition for outstanding efforts include the Congressional Fire Services Institute Excellence in Fire Service-Based EMS Award, Telly Awards for Public Education Programming and Automatic Aid Education, and an Emmy Award for Drowning Awareness and Prevention. Beck is an active member of the NFPA, the IAFC, and the Arizona Fire Chiefs Association. He serves on multiple boards, including the Mountain Vista Medical Center and Life Safety Council and is an advisory board member for the East Valley ACS Relay for Life. Known for having an open mind and being an excellent listener, Beck exemplifies the characteristics of a true leader worthy of Fire Chief of the Year. 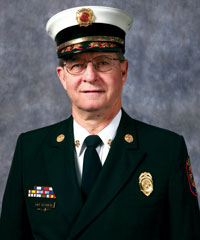 Chief Bill Halmich, a 50-year member of the Washington (MO) Volunteer Fire Company, knows a thing or two about loyalty. Chief since 1981, Halmich has served his community, country, and fire department as a leader, motivator, and consummate professional. Under his leadership, the Washington Volunteer Fire Company became the first in Missouri to achieve an ISO Class 3 rating. Halmich has served on the National Near Miss Advisory Board since its inception, with his department being a pilot case. His ability to manage large-scale incidents, along with his familiarity with (and service as area coordinator for) the Missouri Fire Mutual Aid System make him ideally suited in his service as incident commander for Missouri’s Region C Incident Support Team.

Halmich’s community service does not end with the Washington Volunteer Fire Company. He serves as a governor-appointed member of the Missouri Emergency Response Commission; City of Washington Missouri River Bridge Committee; the Capital Improvement Sales Tax Committee for the City of Washington (three terms); and the committee appointed to acquire enhanced 911 for Washington, Missouri. Halmich is a Vietnam combat veteran, and a member of the American Legion, Elks Lodge, and local VFW Post 2661. He is the recipient of the German Fire Service Medal for International Cooperation. Halmich represents a career devoted to the fire service on a local, regional, national, and international level.