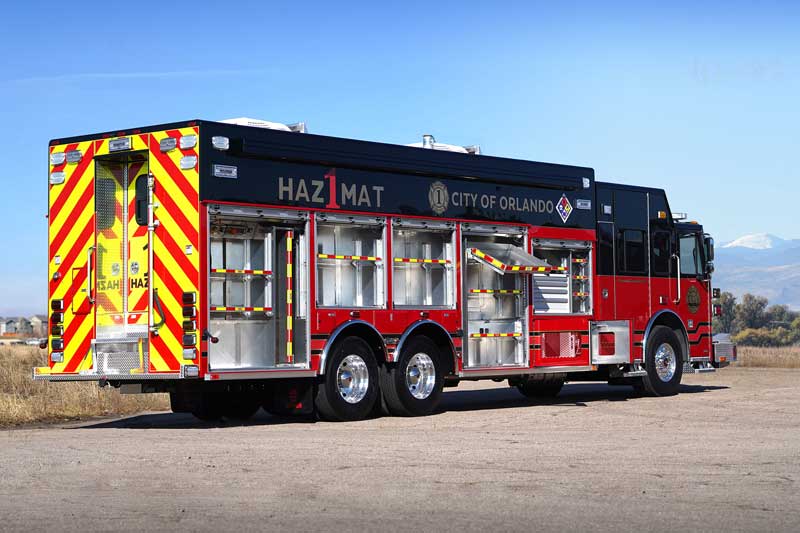 FORT COLLINS, CO—The Orlando (FL) Fire Department will expand coverage with the addition of Hazmat 1, a technical response unit built by SVI Trucks that will replace the department’s existing hazmat while incorporating additional operational responsibilities, including vehicle rescues, rapid intervention, and confined space response. “We are currently going through an operational philosophy change that is going to incorporate further responsibilities for our HazMat 1 in their daily duties,” explained Aaron Rhodes, Orlando Special Operations District Chief. “When we designed this hazmat unit with the help of SVI Trucks, we had to take into account the expanding response capabilities now required of Hazmat 1.”

The new apparatus features a four-door, walk-through Sutphen Monarch cab with three jump seats, compared with the previous three-door cab. “With this cab alone, we’re able to increase staffing, which in turn allows us to rethink many of the truck’s operations.” The truck was sold by David Stonitsch for South Florida Emergency Vehicles (www.sflev.com).

The truck features a walk-through interior that spans the length of the 26-foot SVI-built body to house the crew’s hazmat meters and Level A and B personal protection equipment in a climate-controlled environment. The custom shelves feature outlets to allow for on-the-go meter charging, and the front end of the walk-through features a station for meter calibration and operational research and planning. This interior station incorporates a WeatherPak weather system monitor with plume modeling software, allowing the crew to establish an evacuation zone. Dual curb- and street-side awnings provide additional shade and cover during long scenes, and the apparatus features top-mounted exhaust to move contaminants away from the crew as they work around the apparatus.

Five exterior compartments are dedicated to hazmat, decontamination, and confined space equipment, including a decontamination tent, overpack drums and off-load pumps. In tandem with the off-load pumps, the hazmat is equipped with a Boss Industries PTO-driven air compressor, rated at 160 cfm at 110 continuous psi, along with front and rear air outlets.

In addition to vehicle and machinery rescues, the truck is equipped for rapid intervention should firefighters become trapped during incidents. The rig is able to transport a 16-foot straight ladder with ladder access located below the rear walk-through doorway, and several exterior compartments house the necessary equipment for this type of rescue, including five SCBA. “With this truck, we are capable of handling all things related to hazmat response, vehicle extrication, and rapid intervention,” Rhodes said. “We’re excited to put this apparatus into service. It’s going to serve our community well.”

Orlando’s new hazmat will be on display at South Florida Emergency Vehicles’ eight annual open house from 11 am to 3 pm on December 6, 2019, at SFEV, 4655 Cummins Court in Fort Myers, Florida.
SFEV asks that interested parties RSVP with Patricia at patricia@sflev.com.