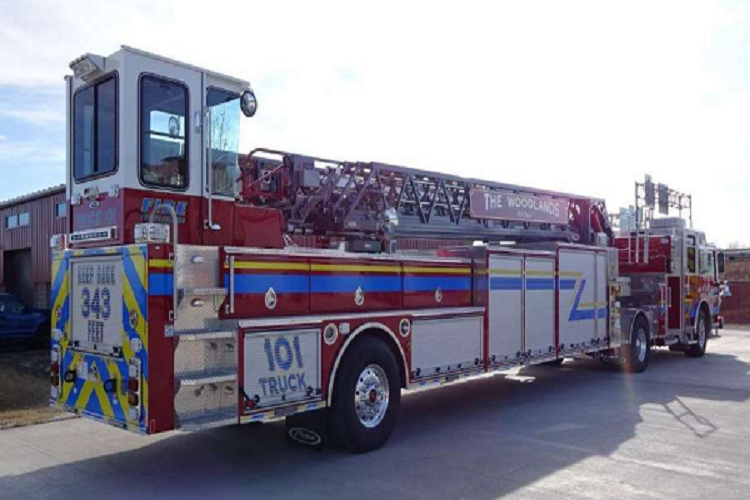 WOODLANDS, Texas (Houston Chronicle) – The Woodlands Fire Department’s newest truck has not been put into use yet as department staff learn how to drive the double-cabbed vehicle, but Fire Chief Alan Benson said he and other leaders at the department are excited to have the new truck added to their fleet.

The truck cost about $1.4 million and was approved for purchase by the township board in December 2016. The truck was delivered to the township in January. The truck was customized by township officials, including purchasing the largest motor available for any fire truck. The department traded in another vehicle in order to reduce the cost, Benson noted.

The truck is not in service yet as firefighters are learning how to operate the various components and also how to drive it. The new truck has a second steering apparatus in the rear cab, which is called in fire department language a “tiller.”

“We’re getting ready to put it into service, it is not here now,” Benson said. “It’s one of those ‘old-style’ trucks. We’ve been doing extensive (training). The tiller is very important — the coordination between the tiller and the (front driver). It actually has a 22-degree swing on the back end. You better know what you’re doing or you’re going to take out a lot of mailboxes.”

Benson also said that for the last four months, department officials have been doing extensive driver training and qualifying for both the rear cab, or tiller, drivers and our regular drivers on the vehicle.

“We’re not going to put it until we have the adequate training and expertise to do it right,” Benson added.

Deputy Fire Chief Doug Adams, of The Woodlands Fire Department, said the vehicle is also called a tractor-drawn aerial fire truck and is more than 61 feet long and has a capacity to hold up to seven firefighters, but normally a crew of four is on the vehicle for fire calls.

“You have a steering wheel in the front and the back,” Adams said of the new truck. “It is our tallest ladder (now). Despite the length of the truck, it’s maneuverability is comparable or exceeds that of our smaller engines because you’re able to articulate into tighter spaces. It really increases what we call the ‘scrub area’ and how much of the area of the building where we can actually get the ladder to.”

Adams said the new truck is a major upgrade for the department that can be used for fighting fires at homes, businesses and for other high-rise incidents at some of the towers across the township.

“It improves our capabilities. It improves our ‘scrub angle,’ improves our access, and it really improves our reach, not only vertically, but horizontally,” Adams said. “We may have a house with a big set back, that extra 7 feet (of ladder length) can make a huge difference.”

Benson said the larger ‘scrub area,’ defined as where water can be sprayed by firefighters, helps if an incident happens at the 30-story Anadarko Tower or other high rise buildings in the township.

“It increases the distance and height of areas where you can access areas of the building. The closer you are to the building, the more height you can get,” Benson explained.

As The Woodlands continues to grow and taller structures are possibly constructed, the fire department has continued to add vehicles and equipment like the new “tiller” fire truck helps fight fires anywhere in the township, Benson explained.

“It’ll go through those little cul de sacs we have all over The Woodlands, and our target hazards, like Market Street, it can get tight in there,” Benson added. “We have several developments in The Woodlands and alleys — (this truck) is much more maneuveable to get you in those tight spaces. It is amazing, that vehicle can get through.”

There is no definitive timeline for the truck to be put into operation, but Benson and Adams expect it to be ready for use soon.