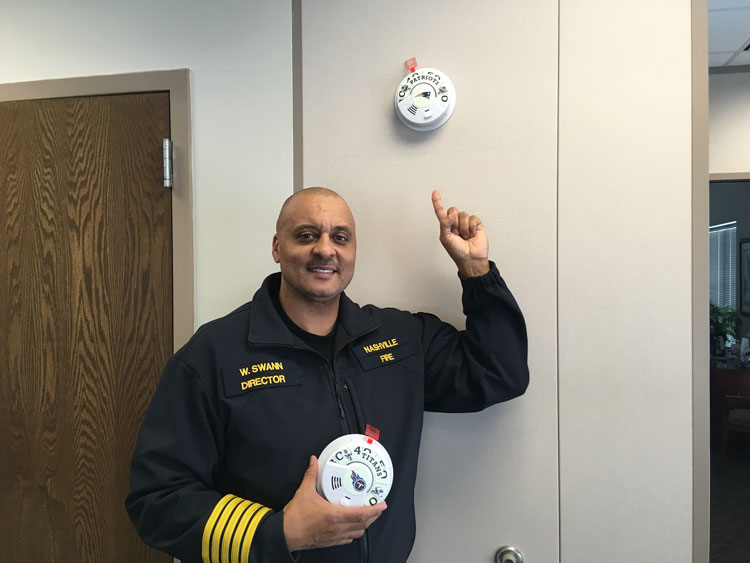 Nashville (TN) Fire Department Director Chief William Swann hung an officially licensed NFL-branded smoke alarm with the New England Patriots’ logo on it after the Tennessee Titans lost to the Patriots 14 to 35 on Saturday, January 13th in Massachusetts.

The NFD won a similar wager against the Kansas City (MO) Fire Department after the Titans beat the Kansas City Chiefs 22 to 21 in the NFL Wild Card Round on Saturday, January 6th in Missouri.

As part of the wager the losing team’s local fire chief must install the winning team’s officially licensed NFL-branded smoke alarm in their office.

“We are 100-percent, true-blue Tennessee Titans fans, but a deal is a deal,” Director Chief William Swann said as he reluctantly installed the smoke alarm.

“For us it was a tough loss,” he said. “However, the public wins whenever we can raise awareness about the importance of having working smoke alarms in homes. They save lives!”

Also as part of the wager, The Buff Project, a New York City-based fire safety organization and distributor of officially licensed NFL Identified Smoke alarms, will donate 50 NFL licensed team-branded smoke alarms for each game for the fire departments to use in their fire safety outreach efforts.

For further information about The Buff Project and to purchase a team-identified smoke alarm, visit: www.thebuffproject.com.