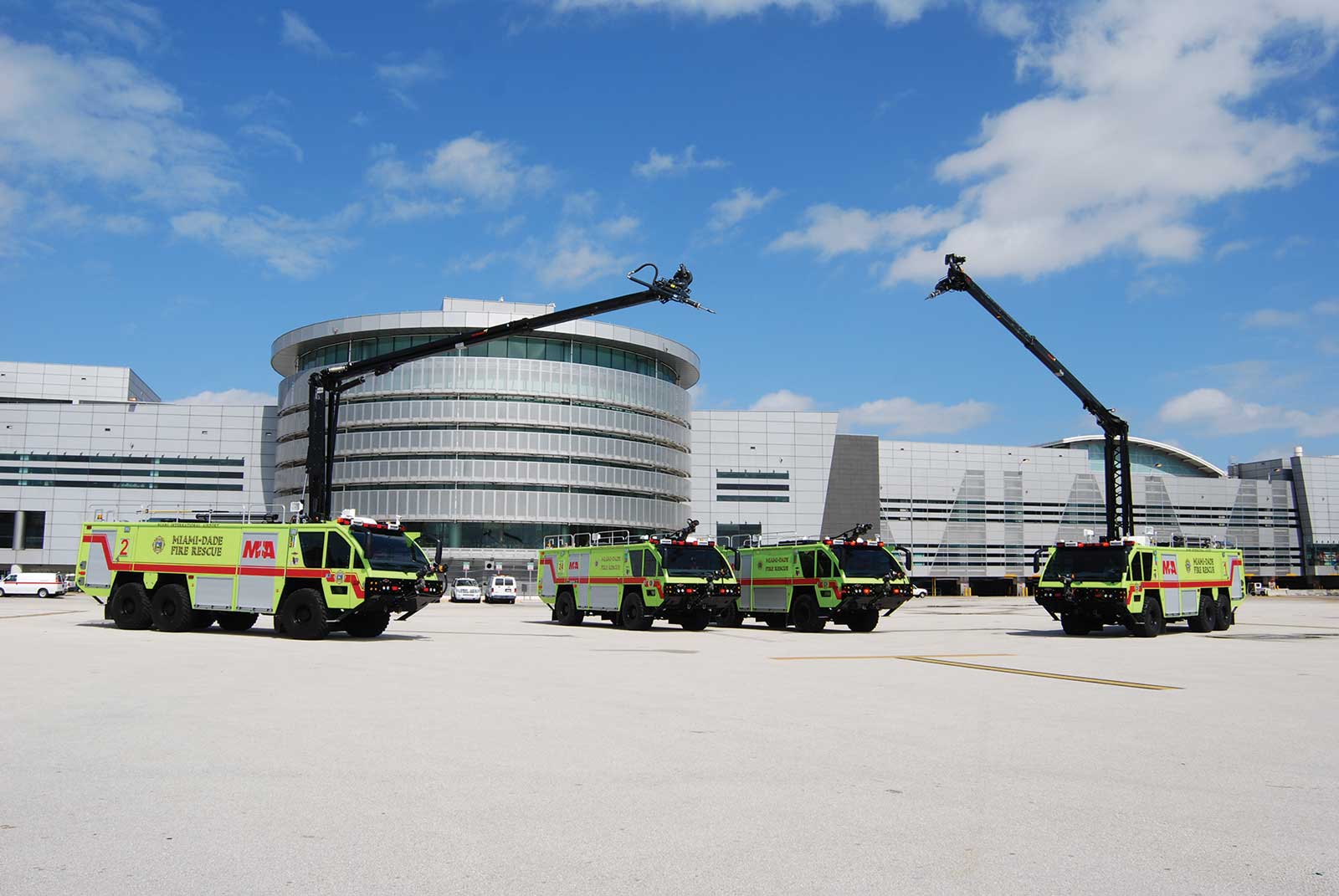 Rosenbauer started the year off strong with the delivery of the 2000th Panther to Fort Lauderdale-Hollywood International Airport (FLL) located in southeast Florida. The airport purchased two new Rosenbauer 6×6 Panthers with extendable turrets. These new Panther units joined a 2015 Panther 6×6 with extendable turret that was already in service, and now, the airport has an entire frontline fleet of Panther ARFF apparatus. The airport is protected by the Broward County Sheriff’s Office Fire Rescue Division, which held a fire department’s traditional “push back” ceremony to commemorate placing the new Panthers in-service.

Located just south of FLL is Miami International Airport (MIA), which is protected by Miami-Dade Fire Rescue. Rosenbauer ARFF units have been protecting MIA since 2011, and the airport now has a package of Airwolf units, a Panther 4×4, and a Panther 6×6 as their entire frontline ARFF fleet. The airport will be taking delivery of two new Panther 6×6 extendable turret trucks this summer, which will be their first new-style Panther units to join the team. They have also just placed an order for another Airwolf and Panther 6×6 with extendable turret that will be delivered in 2021.

Rick Amat is the ARFF driver/operator trainer and oversees the specifications for MIA ARFF units. Amat said the airport has gone with the Rosenbauer ARFF units because of their tremendous versatility and reliability. “The Panthers are an amazing vehicle,” said Amat. “The multitude of onboard systems provides firefighters with several tools in the toolbox so that they can effectively mitigate a wide variety of incidents.”

The new MIA ARFF units have the 360-degree camera system, color camera with zoom capabilities, and forward-looking infrared camera technology that allows personnel to locate hidden fires. Each of these cameras is linked to an automatic recording device to capture all activities for future training or accident investigations. The new units also have the patented Rosenbauer Stinger system on the end of the 54-foot extendable turret that is used to pierce the skin of the aircraft and discharge agents on the interior of the fuselage without firefighters ever leaving the cab. Amat stated, “All of these capabilities require operators to be extremely proficient with the vehicle, and having a common fleet of Panthers allows for muscle memory to be an essential benefit during high stress emergency operations.”

MIA uses a Rosenbauer simulator system to provide virtual training that challenges drivers with multiple aircraft and fire scenarios, occupant evacuations, and various weather and time of day conditions. Amat said that this virtual training is essential in reducing wear and tear on the actual ARFF units, but there is still no substitute for live, hands-on training. “The Panthers are reliable machines. We do lots of live training at MIA, and ARFF vehicle dependability is key to airport index operations, which is one of the major reasons Miami-Dade Fire Rescue continues to choose Rosenbauer over other manufacturers,” stated Amat.

Christian Kleebauer, CEO of Rosenbauer Minnesota, explained both FLL and MIA are known to have some of the most progressive ARFF driver operator training programs in the US. “The fact both FLL and MIA selected Rosenbauer as their ARFF unit provider speaks volumes about the confidence they have in the Panther product line.” Both of these airports now have two generations of Panthers on their front lines and another Panther and Airwolf now going into production for MIA.

Rosenbauer is the world’s leading manufacturer of firefighting vehicles and equipment. In North America, Rosenbauer America incorporates the international strength and innovation of a global company, with top American manufacturing firms, to offer a full line of custom and commercial pumpers, rescues, tankers, and aerials. For more information, please visit the company’s website at www.rosenbaueramerica.com