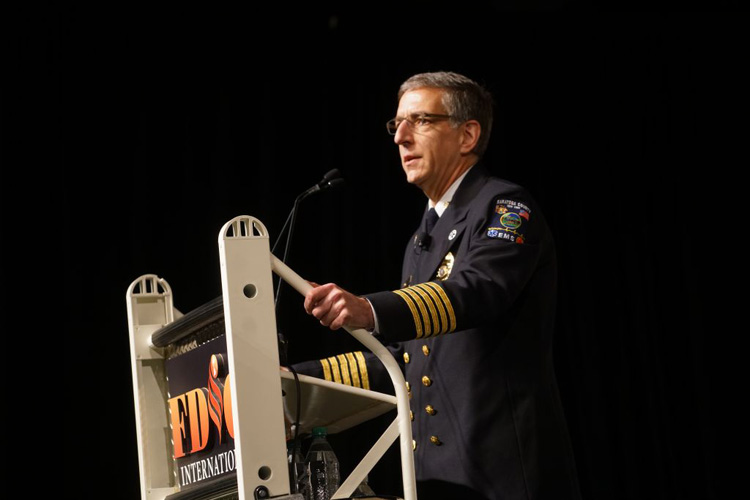 “It’s not enough to merely survive in fire and EMS today. To thrive in this business, you need to find value in what you do: value in yourself, value in the service you provide to the community, and value in your brother and sister firefighters,” Mike McEvoy, technical editor of Fire Engineering and EMS coordinator or Saratoga County, New York, and keynoter at Thursday’s General Session. “The truth is that the “grab” or “save” is chance and may never happen in an entire career. You might not know it, but you do make a difference every day. You use your special powers for good, not evil, and people really appreciate it.” McEvoy reminded the audience: “It is the greatest job in the world.” He suggested that they could accomplish a switch from negativity to positivity by “tapping back into those things that helped us fall in love with the fire service when we first started out.” McEvoy touched on the importance of good morale and its ramifications. “When we connect with the people we serve, our morale improves!  Our purpose becomes apparent. We know we are making a difference.”

These remarks constituted a portion of his tips, suggestions, and guidance directed at making fire and EMS work less stressful, more pleasant, and more fulfilling for responders and possibly serve as antidotes to burnout, depression, and other ailments that contribute to conditions that erode mental health.

McEvoy acknowledged that he was “worried” by the statistics from a research study published in the Journal of Psychiatric Research:

• A third of firefighters have post-traumatic stress disorder, a number two or three times higher than in the civilian population.

• Almost half of firefighters have had suicidal thoughts, 10 times higher than in the general population.

• 19% of firefighters have planned suicide; 15½% have tried to kill themselves.

“No one,” McEvoy said, “should have to suffer from post-traumatic stress disorder or suicidal thoughts. Help and treatment are available. We have to do something to turn this around. There is really no need for us to be miserable. If you want to reconnect with the value in your brother and sister firefighters, if you want to make a difference in their lives, you need to know them. Know their families, their kids, their girlfriends and boyfriends. If a member is in pain, ask, ‘What can I do to help?’ No firefighter should ever have to live with depression, PTSD, suicidal thoughts, drug or alcohol problems. If you see something, say something. We have to do a better job of being our brothers’ and sisters’ keepers.”

He reminded his responder audience that they possess the personality characteristics to succeed as a firefighter, medic, or law enforcement officer–traits that exist in only 10% of the population. “When the adrenaline is flowing, you are happy,” McEvoy pointed out. “When the adrenaline starts pumping in John Q Public, they are terrified, anything but happy.” This fact is important, he explained, “because we tend to think everyone is like us, that anyone could do this job. That is not true. It takes a special person with a unique set of personality characteristics.”

McEvoy cautioned, however, that at least two of these special characteristics can hurt them in their personal lives. “Control orientation and high expectations don’t contribute to positive relationships,” he noted. “If we expect few to no mistakes from everyone in our personal lives, we are sure to be disappointed routinely.”

Another eroder of morale and happiness discussed by McEvoy was negativity. Sometimes, he explained, “we become negative because we lose the value of the service we deliver to others.” He intimated that perhaps this loss could be connected to “how we define HERO. “My definition of a HERO,” he said, “is someone who makes a lasting impression on another person.” These impressions are not often lifesaving rescues, McEvoy explained. He cited the experience of a volunteer firefighter, Mark Bezos, who had written “A LIFE Lesson from a Volunteer Firefighter” (TED Talks). Bezo was assigned by his officer at a fire scene to retrieve a pair of shoes for the homeowner, who was outside shoeless. Another firefighter from his company was assigned to rescue the homeowner’s dog. Bezo was a bit upset that the other firefighter had received what Bezo considered the more noteworthy assignment. However, when the fire department later received a thank you letter from the occupant, she noted one act of kindness: someone had brought her a pair of shoes.

McEvoy touted the value of “little, nice” action. He told of a survey conducted among hospital customers by a nurse colleague. When the families reported what they considered WOW experiences that left a long-standing impression on them, they did not list dramatic resuscitations or tales of patients pulled from the brink of death, McEvoy explained. They cited ordinary events like a nurse sitting and holding the hand of a terrified intensive care unit patient or bringing a tired family member a cup of coffee.

“Being a hero, providing the best care and service to citizens, means that we need to ask, ‘What matters to you?’ McEvoy said. The personal connection–the feelings and perceptions you convey–makes the difference.  Most people are looking for courtesy and respect. They want us to listen to them, take their concerns seriously, and treat them with care and kindness. There is a difference between providing excellent care or service and making people feel cared for or cared about,” McEvoy stressed.

He advised against using compliments to evaluate responders’ value in the customers’ view. “Few folks who work in helping professions receive compliments,” McEvoy said. “But, when and if you do receive one, accept it. If I tell you, ‘You are amazing!’ “say, ‘Thanks, you made my day!’ When you say, ‘I am only doing my job,’ you lose the opportunity to accept some recognition for what you do, and you deprive the other person of the opportunity to give you some recognition.” When you accept compliments, morale improves because you reconnect with your heritage: why you got on the job in the first place.

“You are in charge of your morale,” McEvoy told audience members. “It is not the job of the boss. If you leave the morale in someone else’s hands, you will be unhappy and dissatisfied. When firefighters believe in the work they’re doing and understand how the work they do is important, they are satisfied. That’s when we move from a negative culture to a positive one.” Creating positive workplace environments means choosing to be happy, both as individuals and as teams,” McEvoy advised. “Happiness does not just arrive; it is something we have to work towards.” And, noted McEvoy, unhappiness can cause the loss of life: He told of a study published in Pediatrics in 2015 found that rudeness toward a resuscitation team while caring for a critically ill child in simulation caused 12% of all errors.

McEvoy shared a method for increasing happiness in 21 days. It was by Shawn Achor, a psychologist who proved that if you rewire your brain to think more positively, you could be more intelligent, creative, and energetic in just three weeks. The plan is to pick a time each day to write down three good new things that happened in your life over the previous 24 hours. People who did this reported that their happiness increased by 31% within 21 days.