Professional responders who are first to arrive at a mass casualty incident (MCI) face a complex and potentially overwhelming challenge. It’s possible the first to arrive may be an inexperienced responder who will have to make decisions quickly and may lack mental models to help drive their behaviors. Even in a well-coordinated response, the professional responders may not be able to treat all the injured at the same time, and so they must triage and prioritize the victims.

Spontaneous volunteers often heroically step in to fill the gap without being asked, but their courage and commitment often adds complexity to an already chaotic and challenging situation. Recent MCIs demonstrate that volunteers are often willing to help in a variety of ways. The additional support can make a significant difference in the response, and can help saves lives. Current policy and training don’t encourage professional responders to engage and leverage the public in this manner.1

The initial professional responder (IPR) is defined as “the initial professionally trained and legally recognized responder to arrive at the scene of an event.” It is usually a member of the police, fire or EMS. An IPR arriving on scene at any complex event is often the immediate center of attention for volunteers and victims. The IPR is seen as the legitimate authority and expert to turn to.

This can create a significant amount of stress on the IPR, as well as providing the IPR with an important amount of informal power. The IPR is expected to take charge, make decisions and provide information under the most challenging of circumstances. A simple and straightforward method of trying to bring order to the chaos is needed to allow the IRP to make decisions and manage the incident effectively.

Recognition of the capacity for volunteers to help has led to a number of new initiatives aiming to train and empower volunteers. Simple yet effective medical techniques and initiatives have been developed, such as Stop the Bleed, Be the Help,2 and Until Help Arrives.3

A team from the National Preparedness Leadership Initiative (NPLI) at Harvard University studied the problem of volunteers at emergencies. They believe if IPRs are trained in using a simple protocol to better control and leverage the capacity and support of “spontaneous volunteers,” it will lead to better outcomes. These outcomes could be fewer deaths and injuries, faster casualty evacuation, and more effective scene control at MCIs and other emergency events. The success of this initiative is the development of a protocol and supporting training that allows professional responders to be knowledgeable and effective in coordinating the support of volunteers.

Volunteers assist on-scene for a variety of reasons, but regardless of their motivation, there will be a wide variance in skills, abilities and willingness to undertake certain tasks. A “spontaneous volunteer” (SV) is already helping in some regard when the IPR shows up. A “willing volunteer” (WV) may be in close proximity, but is waiting for a social cue or leadership from someone to help engage and direct their support. There will be those individuals on scene that are unable or unwilling to support the efforts, and they are classified as a “bystander.”  They, too can be dealt with through the use of the protocol, with the intent to maximize the effectiveness of the willing volunteers, while reducing the impact of the passive bystanders. (See Figure 1.)

For ease of memory and implementation, the mnemonic “SCAN” was developed to describe the steps of the protocol,:

Safety of professional responders, volunteers, victims and the public is of primary concern. There may be conditions where the deployment of volunteers is a bad idea. Areas near a hot zone of a hazardous materials incident, or at the scene of a still active violent event. In such cases, even professional responders must consider the risks and take appropriate actions to ensure the emergency doesn’t escalate further. Once the scene is safe enough for volunteers, the IPR should quickly look to leverage willing volunteers and support those spontaneous volunteers who have already engaged and are helping victims.

A simple call for assistance (e.g., “Who can help?”) will likely yield a significant additional outpouring of support. As studies have shown, more than 70% of the time volunteers will intervene and assist even when no one asks for their help.5

A further simple set of questions begins to sort the group of volunteers. Once sorted, those groups can be assigned tasks appropriate to their skills and abilities. The term “volunteer triage” has been developed to help describe the simple steps in assessing and assigning tasks to volunteers.

The NPLI team’s research identified those tasks most needed during initial stages of an MCI. A wide variety of the tasks could be assigned to volunteers depending on the situation and event. For simplicity’s sake, the tasks have been broken up into three general types based on the volunteer’s skills and capability: medical support, scene safety and general scene support. (Figures 2 and 3 outline the volunteer triage protocol.) 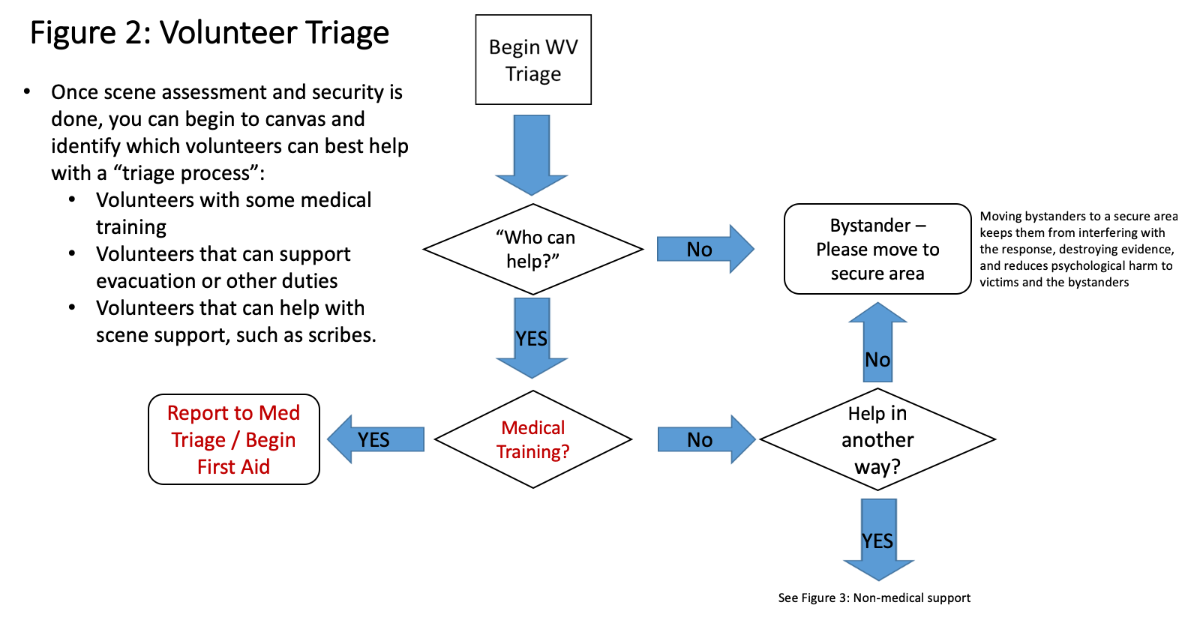 There are a wide variety of tasks that can be assigned to volunteers: scene safety and site access control, bleeding management (e.g., applying tourniquets), evacuation of the injured, delivery of supplies and equipment, being the lookout for emerging hazards or threats, documentation, directing traffic, photographing and recording the scene (e.g., crowd and vehicles), as well as helping to conduct searches.

There are also tasks best left to other trained response organizations, including evidence collection, cleanup of potentially hazardous waste, detaining suspect(s) and other technically demanding work. The project team at the NPLI used an online survey to collect feedback on potential volunteer tasks from a broad spectrum of emergency services personnel and first response organizations.

The professional responder managing the volunteers should continue to network and communicate with the volunteers in order to provide information, encouragement and assistance. This creates a shared situational awareness. This could lead to a more effective response, and may reduce the potential psychological and emotional impact on both victims and volunteers, as they have some insight into what’s happening.3

Given the relative simplicity of the SCAN protocol and feedback on its development, the goal of the project is to incorporate the training and protocol as part of all emergency first responder training. The training can be delivered in a classroom lecture or through an online or hybrid platform. The SCAN protocol can then be practiced in a wide variety of training events, including tabletop and field exercises, as well as full-scale MCI simulations. Consideration should also be given to incorporating the SCAN protocol into incident command training.

Initial response and feedback from emergency management professionals on the project’s work and SCAN protocol have been positive. The course, titled “Who Can Help?”, is being taught to groups of IPRs, police, fire and EMS departments in Massachusetts during April and May 2019.

The course is designed to be delivered in one hour, with a pre- and post-course survey collected from the participants. This feedback will help the team at the NPLI further strengthen the program for future delivery to IPRs around the country and around the globe!

For more information, or to participate in the project’s ongoing assessment, please contact the Who Can Help team at whocanhelp@nmetc.com.

Bradford Newbury, MPA, NRP, is a captain/paramedic with the Stoughton Fire Department in Massachusetts. He also serves as the associate director of EMS education at the Beth Israel Deaconess Medical Center Fellowship in Disaster Medicine.

Tim Fox, MS, serves as a private sector and non-government organization liaison for the Department of Defense at U.S. Northern Command, specifically in the area of disaster response.

Shane Schreiber, MA, MDS, has over 30 years of experience in crisis and emergency management and is currently serving as the managing director of the Alberta Emergency Management Agency in Edmonton, Alberta, Canada.

Detective Captain Michael Lyver, MS, is a 26-year veteran of the Massachusetts State Police, currently assigned to the Division of Investigation Services.