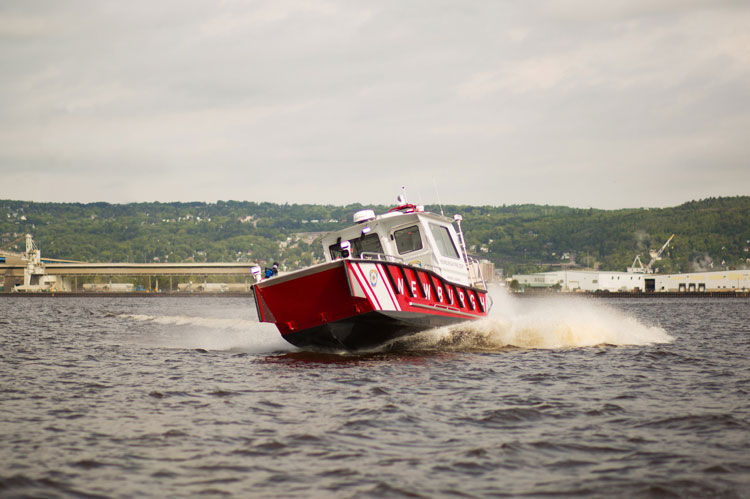 Lake Assault Boats, a leading manufacturer of purpose-built and mission-specific fire and rescue boats, recently assisted the Superior (WI) Fire Department in its response to a fire on an ore boat at Fraser Shipyards. At the time, a team from Lake Assault was in the final stages of testing the 28-foot fireboat destined for the City of Newburgh, New York.  After its successful assist–by providing a water supply for the Superior FD–the craft was placed into service with the City of Newburgh Fire Department.

“Before shipping to customers, we carefully test and inspect every fire boat; this was the first time, though, that we’ve ever responded to a live fire with a craft during its final preparations for delivery,” explained Chad DuMars, Lake Assault Boats vice president of operations. “We are very proud that the boat performed flawlessly with Superior FD, and are, of course, very happy that it’s now on duty with the City of Newburgh Fire Department, protecting vital portions of the Hudson River.”

The fireboat protects large waterfront sections of the Hudson River north of New York City. “It’s pretty interesting that our Lake Assault fireboat helped put out a fire before it was even delivered,” said Ed Petricek, Assistant Fire Chief with the City of Newburgh Fire Department, a 17-year veteran of the department and a member of the committee that spec’d the boat. “We first learned about Lake Assault at the New York Chiefs Show some years ago and, once we were awarded a FEMA port securities grant, we didn’t waste any time moving forward. Our firefighters are really excited to have this new Lake Assault fireboat; it has improved our on-the-water response capability, big time.”

In a joint initiative, the City of Newburgh Fire Department also uses the boat to support the city’s police department. “If the police department needs to go on the water, we take them out on the Lake Assault craft,” added Chief Petricek. “We equipped the boat with a police radio and other law enforcement equipment, enabling our city to efficiently consolidate its water response using the Lake Assault unit.”