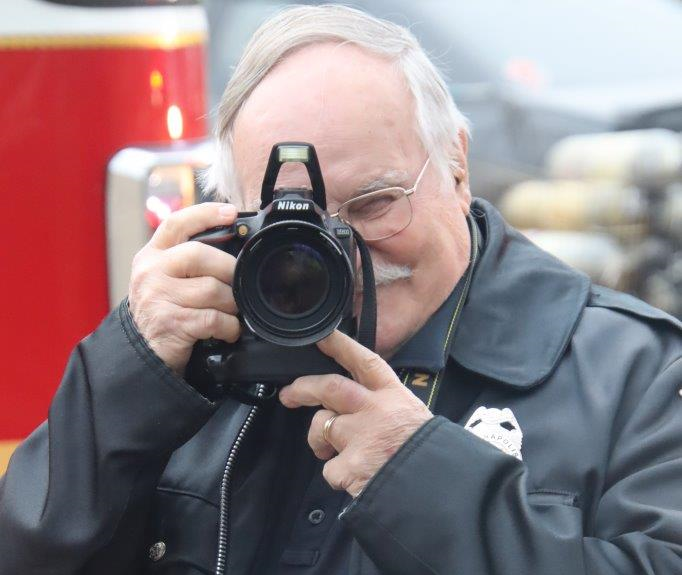 For 21 years Rodger responded to just about every working incident

It is with deep sadness that we inform you of the passing of IFD photographer/historian Rodger J. Birchfield (81).  Rodger is survived by his wife Janice, his daughter Sasha, daughter Heather and son Justin.

Rodger was 10 days away from retirement.

Initial reports indicate that Rodger passed sometime this weekend at his home in Camby.  Earlier this year – Rodger had a tree fall on his house and was in the process of getting the final repairs completed on the structure.  Lt. Adam Arkins and a crew of contractors have been doing the repair over the last several months.  An electrician, scheduled to be there today, called Arkins and 911 after he couldn’t get Rodger to answer the door.  Rodger was found sitting in his recliner, with his IFD uniform shirt on and his radio by his side. By all accounts it appears to have been a peaceful passing.  Rodger was doing what he loved best – waiting on that next run.  The last incident Rodger photographed was the warehouse on Sherman drive on December 17th.

Photographer Rodger Birchfield came to the IFD after retiring from the Indianapolis News.   For those of you old enough to remember…the News was the evening compliment to the morning Indianapolis Star.  A lifelong, self-proclaimed “Fire Buff” Rodger spent many years as journalist with the News before it folded on October 1, 1999.  Rodger joined the IFD one month later on November 8, 1999.

For 21 years, Rodger faithfully responded to just about every working incident in the IFD service district – and several in other districts.  24 hours a day 7 days a week, Rodger could be found photographing firefighters working an incident or highlighting the apparatus on scene.  Rodger’s love of all things fire related is well documented in each and every photo he takes.  His knowledge of the IFD and its storied history is invaluable for anyone trying to connect the present IFD to its historical past.

In 2015 He was awarded the State of Indiana State Fire Marshal Meritorious Service Award.