• HALE’s most recent recipient of its Safe Firefighter of the Month Award is Captain David Howell of the Horry County (SC) Fire Department, where he has served his community for the past ten years. Howell was recognized for the safety initiatives he has worked to establish at his station. He has incorporated daily fitness routines for his firefighters, including emergency situation simulations and job-related skill repetition, such as pulling rope and climbing stairs. Howell also implemented CrossFit training, an exercise program designed specifically for fire and military personnel. “I went to school at the University of Akron for exercise physiology, and I know the importance of staying in shape,” says Howell. “I try to stress safety and fitness training for everyone in the department. It pays off if you can get everyone to put in the time.”

• AKRON BRASS COMPANY hosted eight Ohio companies representing the state’s fire and emergency services manufacturers and suppliers to showcase and illustrate the quality products made in the state used to protect lives all over the world. There are 17 Ohio member companies involved in manufacturing and distribution for the fire and emergency equipment industry. “The fire and emergency equipment industry in Ohio makes a significant economic contribution to our state in terms of productivity, job creation, and taxes paid, in addition to the job it performs in our communities,” says Tom Hudak, president, Akron Brass, and a representative of the Fire Apparatus Manufacturers Association (FAMA) and the Fire and Emergency Manufacturers and Services Association (FEMSA). The company also donated mission-critical firefighting equipment to aid in the battle against forest fires throughout the Austin, Texas, region. It provided necessary forestry nozzles, hand tools, and other equipment to help preserve and protect properties, acreage, and lives from the fires. This equipment replaced equipment already lost in the devastating fires and to supply local fire departments with additional resources. 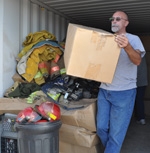 • ROSENBAUER AMERICA’s manufacturing plant, in Lyons, South Dakota, has donated a large shipment of firefighting equipment to the International Fire Relief Mission (IFRM) that will be delivered to firefighters in developing countries trying to protect their communities with obsolete or often no firefighting gear. In addition, members of the Wyoming Fire Chiefs Association collected and delivered a 20-foot-long shipping container packed with turnout gear, SCBA bottles and packs, and an assortment of other equipment. Rosenbauer America made a sizable donation, some of which will outfit a previously donated fire truck that will be sent to the Republic of Georgia. Rosenbauer America agreed to open its facilities for the donation transfer to save IFRM transportation costs. Rosenbauer also gave IFRM two badly needed ladders—one 35-foot extension ladder and one 14-foot roof ladder—and an assortment of gear to outfit firefighting rigs, including foam systems, tools, hose reels, scene lights, and battery chargers.

• THE 2011 FIRE AND LIFE SAFETY EDUCATOR OF THE YEAR AWARD has been presented to Lieutenant Annmarie Pickett. She received the award for her dedication to the Worcester Fire Department Public Education and Community Risk Reduction program. This award honors an individual or a team for their involvement and commitment to make our world safer from fire and other preventable injuries. It seeks to recognize those who have exhibited excellence in educating their community members about fire and life safety and have demonstrated outstanding leadership, teamwork, creativity, and perseverance.

• THE CITY OF ISSAQUAH, WASHINGTON, is now home to one of the most operationally streamlined and energy-efficient fire stations in the world. The station is designed to become the highest-rated LEED Platinum fire station in the United States. The new 11,400-square-foot station includes 6,900 square feet of living and office space and has three bays to house two fire trucks and two emergency response vehicles. The city’s goal was to build a model fire station that exceeded the expectations of Eastside Fire and Rescue and was capable of achieving net-zero energy use. High-performance building features include a super-insulated rainscreen envelope with triple-pane windows, radiant floor heating and cooling, high-efficiency bedroom fan coil units, solar and ground-source heat exchange, energy recovery ventilation, living area and bay daylighting, occupancy and use-monitored electrical circuits, photovoltaic power array, rainwater harvesting for toilet flushing and vehicle wash, high-efficiency plumbing fixtures, FSC-certified lumber wood framing, and environmentally beneficial materials selection.

• THE HELP EMERGENCY RESPONDERS OPERATE EMERGENCY SYSTEMS (HEROES) ACT addresses the vulnerability of emergency communication networks by setting up a DHS-administered grant program for local municipalities to apply for funding for essential communications equipment that the federal government requires them to upgrade. The HEROES Act of 2011 will establish a $400 million DHS-administered Narrowbanding Compliance Assistance Program to assist first responders in meeting the January 1, 2013, narrowband mandate, use the sale of federally owned spectrum to pay for the competitive grant program, and reallocate the D block to public safety and provide funding for the construction of a national interoperable public safety wireless broadband network.

• IN MOTION TECHNOLOGY has been awarded a statewide contract for an automatic vehicle location system (AVLS) for the trauma care network for Georgia. Phase 1 implementation is complete, and Phase 2 initial deployment was expected to be completed by the end of September. The Georgia Trauma Care Network Commission (GTCNC), the Georgia Emergency Management Agency/Homeland Security (GEMA/HS), and the Georgia Tech Research Institute (GTRI) are developing a state-wide AVLS to provide a display of ambulance positions and to advise EMS agencies and hospitals of the closest appropriate facility to transport or transfer patients, specifically in a state of emergency or a mass casualty incident (MCI). The challenge is to integrate more than 200 existing EMS agencies, each with their own independent communications technology. One of the goals of the program is to implement AVLS to all primary 911 Zone Providers to provide the citizens of Georgia with a powerful trauma and MCI management system including an advanced telemedicine technology infrastructure.