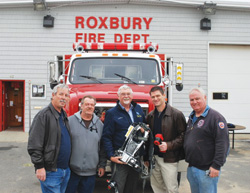 • SCOTT SAFETY recently donated 30 Air Pak SCBAs and three Eagle Attack TIC devices to Breezy Point, New York, area volunteer fire departments devastated by Hurricane Sandy. The departments of Breezy Point, Point Breeze, Roxbury, and the area around Breezy Point suffered significant losses while responding to the massive surge and subsequent fires caused by the storm. Expensive protective gear and first responder vehicles were lost or damaged as local departments scrambled to save local residents from floodwaters and raging fires. Scott technicians from the home office in Monroe, North Carolina, upgraded 30 packs to 2007 National Fire Protection Association (NFPA) standards, and with the help of retired FDNY Firefighter and Scott consultant Tom McDonald, who coordinated the relief effort, dispatched the $200,000 worth of equipment to various departments in the region.

• RESCUE ONE has secured an order for 75 rescue boats for the country of Thailand. The order will be shipped in phases for an in service date of late 2013. Rescue ONE partnered with DLM Solutions on the project to equip government agencies with Rescue ONE Connector boats outfitted with outboard engines, command consoles, rescue platforms, and emergency light bar mounting racks. DLM will also build Rescue ONE’s double-stacked trailers to allow 38 rescue stations around the country to be equipped with two boats transported on one trailer.

• KME announced that the Boston (MA) Fire Department has awarded the manufacturer and its sales representative Bulldog Fire Apparatus an order for five custom foam pumpers purchased under the FCAM (Fire Chiefs Association of Massachusetts) contract. These units will join the ten KME pumpers and two rescue trucks already in service in Boston. In addition, Boston has three 109-foot AerialCat™ rear-mount ladders currently in production at KME. The new pumpers include features to specifically handle incidents in the tunnel system that runs throughout the city of Boston. Each rig is equipped with a secondary pump for pump-and-roll operations, which will supply both water and foam to the remote controlled bumper turret. Ground spray nozzles are included beneath the units to protect against the potential of rolling fuel that could become ignited during operations. A remote-controlled deck gun is also included for higher flow on major incidents requiring additional foam attack.

• PRECISION FIRE APPARATUS has expanded its offerings. Under focus from new ownership, Precision will add an aggressive approach to the remount business, while still continuing 22 years of specialty fire apparatus manufacturing. Stacy Robertson, Brad Johnston, and Jim Keltner have joined forces with equal ownership in Precision to focus on a market that they believe is a growing part of the fire apparatus industry. While continuing to focus on manufacturing rescues, pumpers, and tankers, Precision sees a need for a quality remount supplier. The company expects its ability to provide a customer with a loaner unit while the department’s current apparatus is being remounted on a new chassis and quick turnaround will be beneficial to departments trying to upgrade their apparatus while working under a squeezed budget. In most cases, Precision feels it can save departments $60,000 or more per unit by remounting current apparatus and still providing wanted and needed upgrades.

• BERKSHIRE FLEET SERVICES, specializing in providing business development, strategic consulting, and sales outsourcing for services relating to the transportation, fleet, and vocational industries, announced that it will offer its warranty programs to the fire service vehicle/vocational markets for new and used emergency vehicles. Berkshire Fleet Services has partnered exclusively with Premium 2000+™ Warranty Programs for these services. Coverage options range from strictly engine to the entire power train (transmission and rear axle assemblies) as well as turbochargers, injectors, and other related components including emission control devices. Term lengths can extend up to 48 months and 500,000 miles.

• MOTOROLA SOLUTIONS, INC. is the first public safety LTE vendor to successfully complete all testing activities associated with Phase 3: Part One, with the Public Safety Communications Research Program (PSCR) located at the Department of Commerce, Boulder Laboratories, Colorado. The testing by Motorola and Ericsson successfully demonstrates the interoperability of the radio access network (RAN) and evolved packet core (EPC) with three major network vendors. The successful completion of the Phase 3: Part One test is a key milestone toward Motorola becoming an authorized supplier to FirstNet, the nationwide public safety broadband network.

• PIERCE MANUFACTURING delivered five Pierce® pumpers and two 105-foot aerial ladders-all built on the Arrow XT™ custom chassis-to the Prince George’s County (MD) Fire/EMS Department. The five pumpers are outfitted with custom cabinets that allow firefighters to reach critically important equipment from inside the climate-controlled cabs without having to step up or down. The vehicles also feature 450-hp DD13 engines, 750-gallon water tanks, 1,500-gallon-per-minute (gpm) single-stage pumps, as well as seating for six firefighters and low hosebed heights. The heavy-duty aerial ladders each have special compartments on top of the vehicles to allow firefighters easy access to saws and other rescue equipment. The department also added an additional 60 feet of ground ladder storage on the body. One of the aerials features a pump, while the other does not. Pierce dealer Atlantic Emergency Solutions, of Manassas, Virginia, provides local service and support.

• AMDOR INC.‘s parent company has acquired Actuall Innomotive. Actuall is a European solutions provider specializing in actuators, lifting devices, and electrical components with operations in The Netherlands, Germany, and Malaysia. Ron Houtveen, managing director for Actuall, will add technical director for the newly expanded group of companies to his duties.

• SYNTEX INDUSTRIES, a manufacturer of portable water tanks and hosebed and crosslay covers, has expanded its recycling program. Syntex has always recycled its steel and aluminum, but now it is also recycling paper, cardboard, plastic, ink cartridges, and wood pallets. Syntex has set up special bins throughout the plant to collect the different materials. In the near future, Syntex Industries is studying other ways to eliminate more waste in becoming a “zero” waste facility.