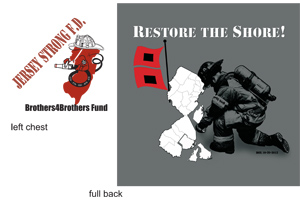 In addition to the devastation that occurred along the eastern seaboard as a result of Hurricane Sandy, we have all heard of or at least seen video/television footage of some of the incredible work done under horrific working conditions, by firefighters on the East Coast. Much of this work was done in their own neighborhoods while their own homes and families were threatened.

Many of us not directly affected by the storm have been looking for a way to help “our own” in their time of need.

The New Jersey Fraternal Order of Leatherhead Society (FOOLS) chapter of FOOLS International has formed the Brothers4Brothers Fund in an attempt to offer some relief for those firefighters who lost everything along the Jersey Shore. The fund raising campaign is a t-shirt/sweatshirt sale, known as “Restore the Shore: Brothers4Brothers Fund.” The art and design for the shirts was donated by a fellow FOOL/firefighter (Missouri), and the actual printing of each and every shirt is being hand screened and donated by fellow FOOL/firefighters (Idaho). One hundred percent of the net proceeds will be distributed directly to firefighter families devastated by Hurricane Sandy.

Order information can be found at www.FOOLSinternational.com.