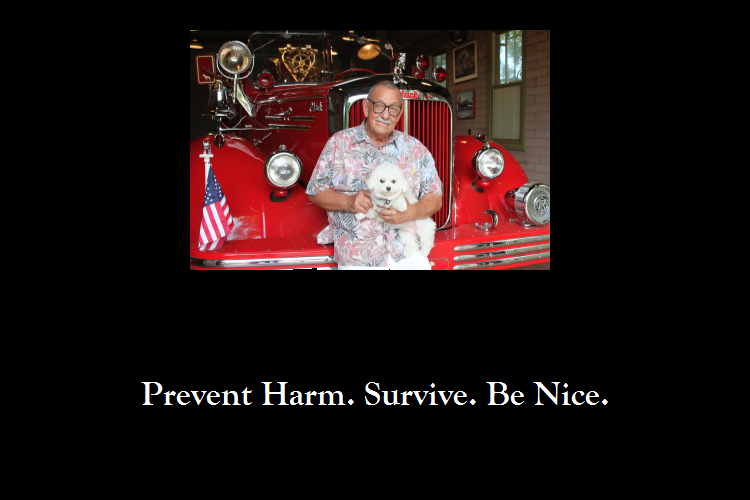 He was born on April 18, 1937, in Jamestown, New York. When he was about 5 years old, Bruno’s family relocated to Albuquerque, N.M., where he graduated from Highland High School. He moved to Phoenix as a young man, and in 1958, he joined the Phoenix Fire Department (PFD). One year later, he married his best friend and sweetheart, Rita.

He moved up the fire-department ranks, holding every sworn position. Along the way, he took note of what worked and what needed fixing. When he promoted to Fire Chief in 1978, Bruno sparked a much-needed revolution. A gentle-hearted philosopher with a keen wit and kind disposition, his leadership creed was sincere, smart and simple: Prevent harm. Survive. Be nice. Bruno’s primary focus was firefighter safety. Second only to that, he told his charges, take gentle care of our citizens. He was a dedicated advocate for “Mrs. Smith”—that’s the name he chose to represent any fire-department customer. Treat Mrs. Smith with respect, he said. Be kind, show compassion. Chief Bruno was nothing if not genuine, and he showed those he worked with the same gracious consideration he expected for the citizens of Phoenix.

Bruno’s humor and candor made him a favorite at fire-service conferences and symposiums. His sweet brand of leadership proved infectious, and other departments across the nation began adopting his customer-service philosophy. When his 1996 book, “Essentials of Fire Department Customer Service,” was featured in The Wall Street Journal, leaders and bosses from all industries heeded his straightforward advice. Bruno’s other books include “Command Safety,” “Timeless Tactical Truths,” “Anatomy and Physiology of Leadership,” and the renowned “Fire Command,” which many credit for improving how firefighters operate on the scene of hazardous events. Chief Bruno and his sons eventually used the principles of “Fire Command” to develop Blue Card, an innovative training and certification program that has trained 35,000 firefighters to date for the challenges faced at structure fires.

Bruno retired from the PFD in 2006 after 48 years of passionate service. The quintessential object in motion, Bruno continued lecturing, writing and teaching. He was a graduate of Oklahoma State University’s Fire Protection Technology program, and he had a Bachelor of Science and a Master of Public Administration from Arizona State University. Bruno was always learning. You would often see him scribbling notes on 3 x 5 cards he kept in his pocket. He had faith that anyone at anytime could have something clever to say, and he didn’t want to miss it.

Bruno is survived by his beautiful wife Rita; his sons Nick (wife Michele) and John (wife Holly); his daughter Candi (husband Ryan); his grandchildren Alex, Alana, Chelsea, Lauren, Olivia, Katie and Maria; and a loyal tribe of co-workers and friends. He lives on as the angel on our shoulders, reminding us to “Be Nice,” even when it’s difficult.

A celebration of Chief Bruno’s life and legacy will be held Saturday, Nov. 4, 1 p.m., at Comerica Theatre, 400 W. Washington St., Phoenix, Ariz. Dress is casual. In honor of the chief’s signature style, Hawaiian shirts are welcome. Those attending the service who wish to bring fire apparatus should contact Aaron Ernsberger at 602.501.9977. To share your memories of Bruno with his family, please visit the Shadow Mountain Mortuary website.

Chief Brunacini was an organ donor, and his tissue will be used to benefit burn victims and others requiring reconstructive surgery. In lieu of flowers, the family asks that donations be made to the Arizona Burn Center or the ASPCA.