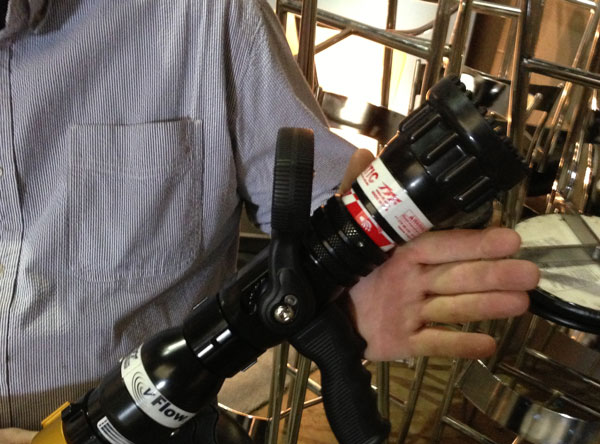 HOT attendees aren’t the only ones who learn at the Fire Department Instructors Conference (FDIC). According to Rod Carringer, chief marketing officer at Task Force Tips (TFT), the company meets with its distributor network at FDIC to determine from it what may or may not work for them, making the show as much of a learning tool as it is a springboard for new products. “Our dealers will be here, so a lot of it is feedback we get from our distributors. For example, “We have a series of new pierceing nozzles that we’re going to be showing, and that’s mostly just to get feedback to decide if that’s  project that’s going to go forward or not,” says Carringer. “The dealers don’t mind telling you. If they think there’s an opportunity for it, they’ll tell you the ten things we need to do to make it better.”

TFT spends a lot of its time at the show asking questions about what problems distributors are having, what things they are using that they wish are better, or what things could the company redesign to make them more functional or safer. “We always go home from here with probably two dozen new ideas of things that will eventually get into our funnel system.” As for this year, TFT has plenty of new products to go around.

Among some of its new products are the FlipTip nozzle, the Hemisphere monitor, a new version of the Blitzfire, and a product that allows the nozzle an to know when the proper flow has been archived for a handline.

Putting a fire out is about absorbing BTUs. To do so, you have to have the proper flow. TFT‘s VFlow product will vibrate to let personnel on the attack line that proper flow has been achieved. It is a small device (shown) that a does not affect friction loss in the line. Firefighters will feel the vibration on teh line approximately six to eight feet behind the nozzle.

Research showed that having a Blitzfire monitor that could pivot at almost 90 degrees would benefit attack crews. So, TFT now offers the device in a version that will bend to 86 degrees. “One of the issues we had at 46 degrees is you couldn’t work the overhead,” says Carringer. “So, on the industrial side as well as municipal side, there’s a need to work into the overhead and still do it safely.”