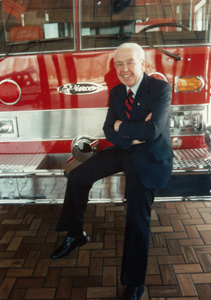 APPLETON, WI—Pierce Manufacturing has announced the passing of Doug Ogilvie, a 41-year veteran of the company and past president and CEO.

Ogilvie was known by many as “Mr. Pierce” and established a culture of listening, caring, quality, and customer service that set the gold standard for the fire apparatus manufacturing industry. He led by example, believing that every employee should be fully engaged in his position in the company and that each had a significant role to play in Pierce’s success. He was a regular visitor at the coffee shops and restaurants near the Appleton, Wisconsin, plant, where dealers and customers would be on hand during inspection visits to the plant.

Well into his 90s, Ogilvie would return to Pierce from time to time and was always warmly received by all. Ogilvie said that along with the work ethic that was so important in the building of Pierce as a leader in the industry, timing, market changes, the opportunity to partner in the Snorkel program, and the availability of a fire pump were very important pieces that allowed Pierce to become a major supplier to the industry.

Ogilvie joined Auto Body Works in 1948 as a sales engineer, having completed his studies in engineering at the University of Wisconsin. He was named vice president and general manager of the company in 1958, the same year the company built a body unit with storage compartments on a chassis with a Pitman Snorkel articulating boom and platform with an attached fire hose.

Ogilvie was elected president of the company in 1960, and the company’s name changed to Pierce Auto Body works. Sales grew to more than $1 million in 1961. In 1962 Pierce was able to obtain the rights to purchase and use the Waterous fire pump. The high acceptance of Pierce bodies on Snorkel apparatus lead to many requests for Pierce to build a complete fire engine. Now with a pump supplier, Pierce was ready to enter the fire apparatus manufacturing industry. Pierce displayed its first fire apparatus at the International Association of Fire Chiefs Conference in Louisville, Kentucky, in 1969. That same year, the company changed its name to Pierce Manufacturing, Inc.

Ogilvie became CEO in 1986. At that time Pierce had more than 850 employees operating out of three facilities. A change in ownership occurred in 1987 when Ogilvie and others sold their stock in the company. Ogilvie felt that it was time to step away from day-to-day operations.

The transformation and growth of the company during the 41 years that Ogilvie was involved in the company is a major part of the Pierce story. A few years ago, Ogilvie shared a few thoughts on his years at Pierce. The ability to work as a team with people with common goals was the key to success, according to Ogilvie. Working together, respect for the customer, and service to the customer were the building blocks to build Pierce. “Every day was an opportunity,” Ogilvie said. While Pierce was becoming a major manufacturer of fire apparatus, there were plenty of established competitors, many with their own custom product lines. Ogilvie explained “While some competitive apparatus was custom built, there were a limited number of options offered. We at Pierce listened to the needs of the customer. Engineers did their best to find a solution that could be designed and manufactured to meet the need. We were a true manufacturer of custom fire apparatus.”