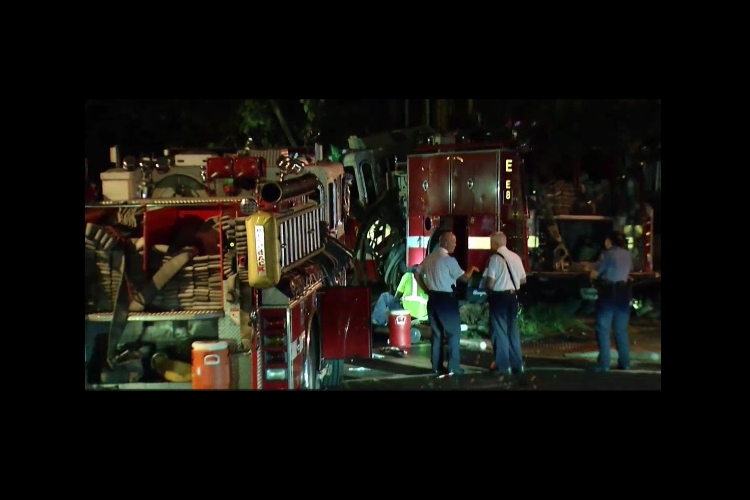 WASHINGTON (NBC Washington) – After three high-profile firetruck accidents that have injured or killed first responders, D.C. Fire moved to prevent collisions by ordering some firetrucks to stay farther away from blazes.

The changes, implemented hours after eight firefighters rushing to extinguish a blaze were hurt in a crash Friday, require backup units stay two blocks away until other orders are given.

A woman was trapped inside a fourth-floor apartment on 1400 block of L Street SE, where a blaze sent orange flames shooting out a window.

Engine 8, dispatched from the block of 1500 C Street SE, and Engine 19, dispatched from near 2800 Pennsylvania Avenue SE, headed to the scene after an emergency call came in about 6:45 p.m.

The two collided as Engine 8 traveled along 15th Street and Engine 19 traveled along K Street. It appears Engine 19 struck the other truck. They collided about 7 p.m. in the middle of the intersection — just two blocks away from the blaze.

Four firefighters from each truck were sent to hospitals with injuries that were not life-threatening.

Friday’s crash was the third high-profile firetruck collision resulting in injury in about a year. Dane Smothers Jr. needed a lung removed and several other surgeries after he was crushed between two trucks in August 2017. In March, 32-year-old DeAngelo Green was killed when a firetruck struck his car.

The two engines involved in the crash were two of the oldest in the fleet and did not have working dash cameras.