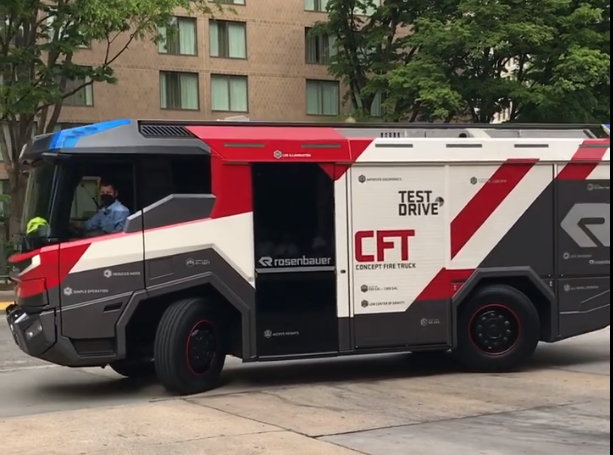 On its march toward Washington, D.C., and on the heels of its stop in Howard County (MD), the Rosenbauer RT, America’s first electric fire truck, will be in Hicksville, NY, this week, reports LongIsland.com.

The truck will be on display at Gabrielli Truck Sales at 880 South Oyster Bay Rd. from 2 p.m. to 4 p.m. for this entire week.

The eco-friendly truck can run solely on battery power for two hours before a 6-cylinder clean diesel engine kicks on for a recharge. Officials add that the apparatus can raise up to about an 18-inch ground clearance and can drive through three feet of water.

In addition, passengers can launch a drone from the truck and have aerial photos sent directly to the driver’s seat. Its top speed is the same as traditional trucks—65mph—but the RT has a faster acceleration.

Officials say the RT will cost anywhere from $950,000 to $1.2 million, depending on its features.