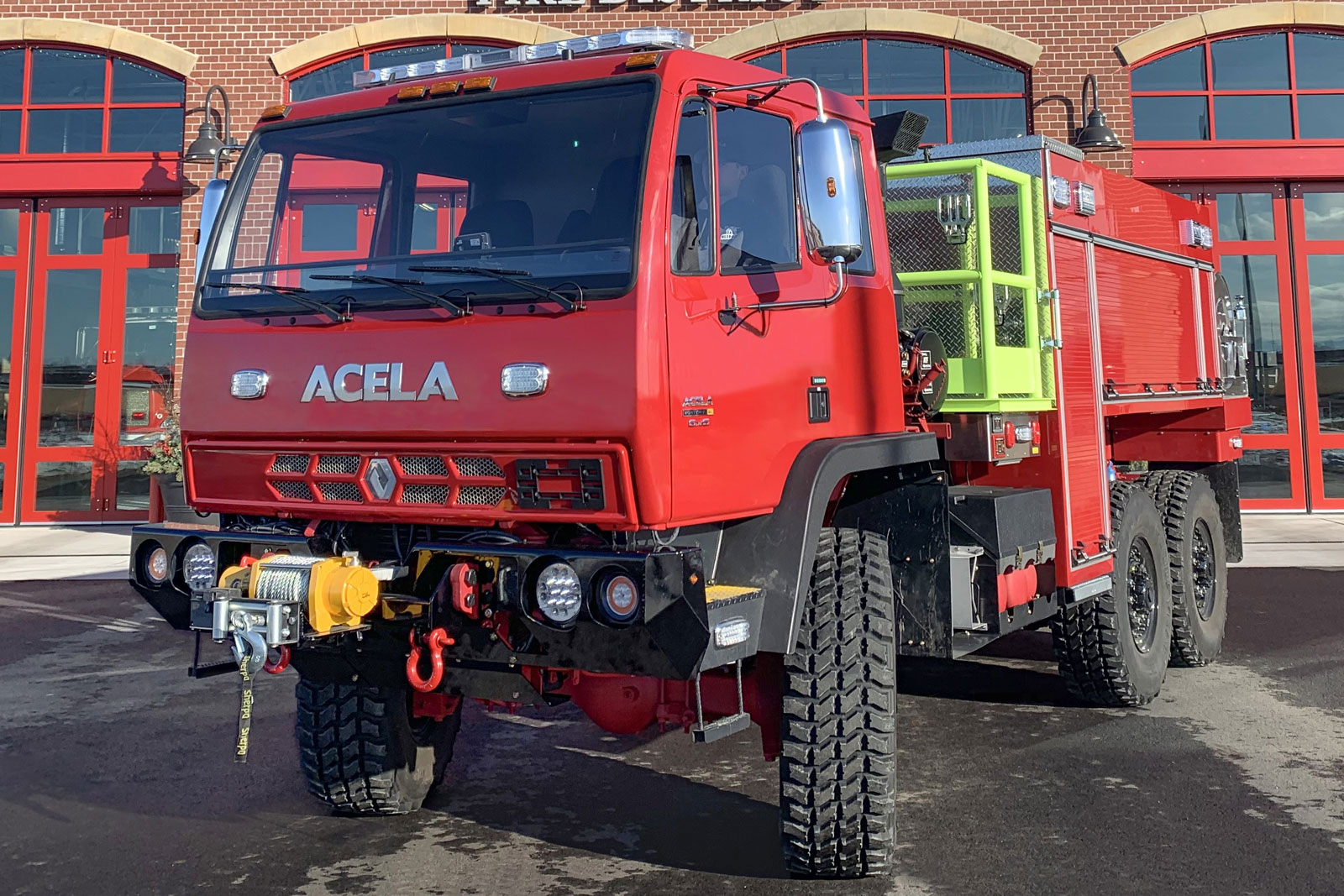 Bozeman, Montana – Acela Truck Company recently announced that it has expanded its line of Monterra™ high-mobility response apparatus to include wildland and urban interface fire trucks.

With 47-inch tires, 23 inches of ground clearance, all-wheel-drive, central tire inflation systems (CTIS) and impressive payloads, Acela’s specialized wildland truck variants are capable of operating in terrain simply not accessible to any other wheeled vehicles on the market.  Additionally, highway speeds of 74 MPH make them perfectly suited for long-distance or mutual aid response.

Acela’s wildland and urban interface offerings will include 4×4 and 6×6 engines and 6×6 tactical water tenders.  All apparatus can be procured directly through Acela, multiple government procurement schedules or one of its growing number of dealers or fire truck manufacturer representatives.

“Expanding into  the firefighting market has always been a priority for Acela. Last year we launched our lines of specialized high water/flood rescue trucks and they’ve been our fastest growing product line since.  Continuing to expand our emergency response offerings was a very natural progression,” said Acela Truck Company President, David Ronsen, a retired wildland firefighter.  “I know first-hand how frustrating it is for firefighters to be faced with the challenges of lack of access into mountainous, muddy, sandy and other extreme terrains”, says Ronsen, “our Monterra line of fire trucks provide access never before achievable with wheeled vehicles.  With onboard central tire inflation system the Monterra’s performance mimics that of tracked vehicles….it’s really astonishing”

The Boonsboro Volunteer Fire & Rescue Department of Bedford County, Virginia recently took delivery of Acela’s newest wildland fire product, a 6×6 1000-gallon Type 4 CAFS engine.  “We had been looking for a truck that had all the capabilities of a traditional fire truck and one that would also provide extreme off-road capability without modifying the OEM suspension.  We are located in the mountains, so access and mobility were key features for us,” according to BVFR Fire Chief Lewis Lichford. “After delivery of our Monterra brush truck, we knew we made the right choice going with Acela. We can provide far superior service to our community with this unstoppable truck, not only with wildland fires, but high/low angle remote rescues, water rescues and natural disasters.”

The Acela Monterra line of trucks were originally designed for the U.S. Army and are considered to be the most capable wheeled vehicles available in North America. In addition to wildland fire trucks, Acela produces high water/flood rescue trucks which can be used for virtually any disaster response such as tornados, hurricanes, blizzards, mudslides and earthquakes, easily traveling over or through large debris,, Urban Search and Rescue (USAR) support vehicles, cargo haulers and SAR/SWAT team troop carriers, in rural and urban environments.  Monterras were specifically designed to replace obsolete and unsafe military “deuce and a half” and “five ton” trucks and come standard with full parts and service support backed by a bumper to bumper parts and labor warranty.

For more information about Acela check out their website at www.acelatruck.com