Although the bulk of the response work for wildland fires continues to be handled by Type 3, Type 4, and Type 6 wildland engines, many fire departments are turning to Type 1 wildland urban interface (WUI) engines for wildland fire response, especially in those areas where the interface is heaviest.

Matt Stocker, director of sales for Boise Mobile Equipment (BME), says his company has been getting calls from fire departments for WUI engines built on custom chassis and cabs with short turning radii, large pumps, and big water tanks. “We’re seeing a lot of the more rural fire departments wanting an engine that can handle structural fires and wildland fires,” Stocker says. “Besides the custom cab versions, we also make Type 1 WUI engines on commercial chassis like the International Navistar with a 200-inch wheelbase, a 1,250-gallon-per-minute (gpm) pump, a 750-gallon water tank, an auxiliary pump to give them pump-and-roll capability, and an onboard foam system.” 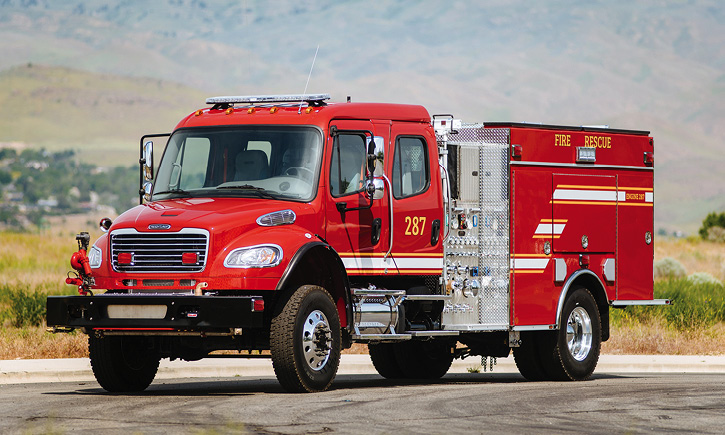 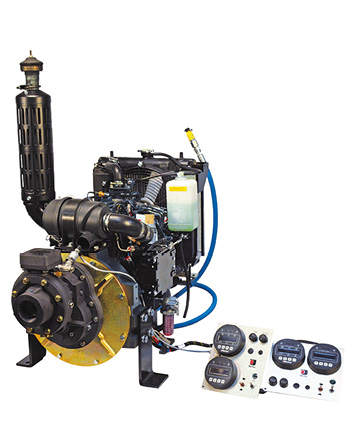 Chad Moffat, BME’s president, observes that BME also has built a lot of WUI Type 3 engines that have from 1,000-gpm to 1,500-gpm pumps instead of the typical Type 3 500-gpm fire pump. “They still carry a 500-gallon water tank and a foam system and auxiliary pump,” Moffat adds, “but they’re looking for the shorter wheelbase of the Type 3 for use in places where they can’t get their larger Type 1 engines.”

Jason Darley, North American sales manager for W.S. Darley & Company’s pump division, points out that a lot of Type 1 WUI engines in the western United States are based around the California Governor’s Office of Emergency Services (CAL OES) specification. “The typical Type 1 WUI engine will be similar to a Type 3 in that it will have two pumps on it, one a chassis engine-driven pump and the other an auxiliary pump, usually located in the dunnage area, that provides pump-and-roll capability and delivers water at a higher pressure and low flow,” Darley says. “CAL OES has switched to our 1,500-gpm LDMX pump for its Type 1 WUI pumpers and our 1-1/2AGE-24k auxiliary pump for pump and roll.”

Doug Feldman, western region manager for Rosenbauer, notes that Rosenbauer “is building a fair number of WUI engines, primarily with CAFS units on them, but also some with just Class A foam. Our WUI engines are about three feet shorter than a typical Type 1 pumper, having about a 170-inch wheelbase, because the fire departments want a smaller, more nimble, multipurpose pumper.” 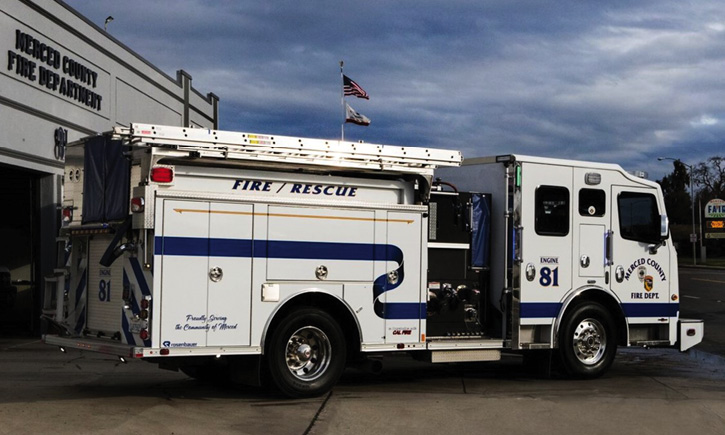 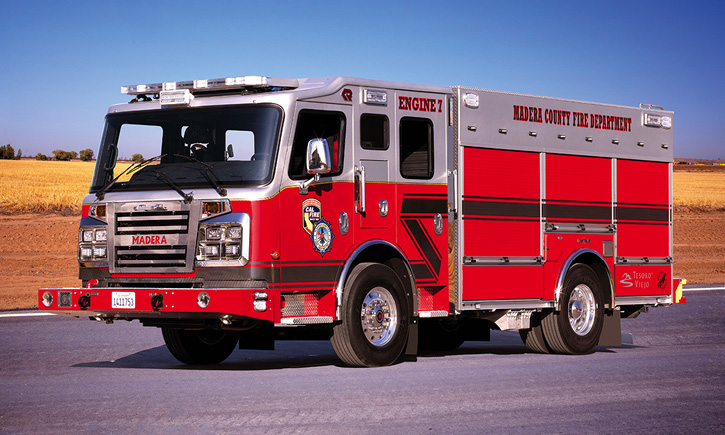 4 This Type 1 WUI engine built by Rosenbauer for the Madera County (CA) Fire Department/CAL FIRE is on a Warrior chassis with a high angle of approach, a Rosenbauer NH 1,500-gpm dual-pressure pump, a 750-gallon water tank, and a 20-gallon foam tank. 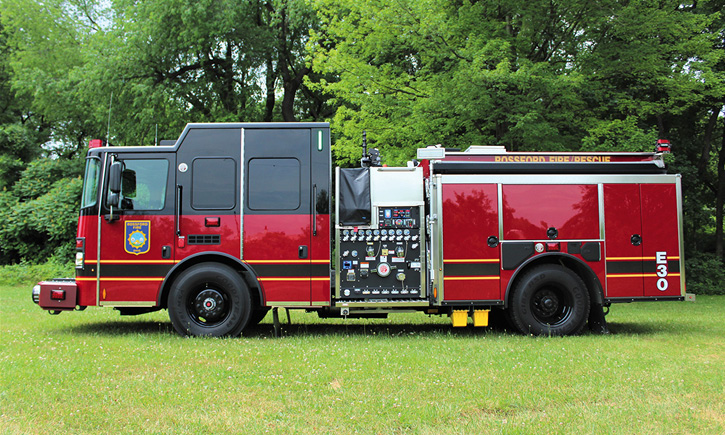 Mark Pimentel, battalion chief of fleet management for the Merced County (CA) Fire Department/CAL FIRE, says his department had Rosenbauer build two Type 1 WUI engines on a Commander chassis and 54-inch cab with an 8-inch raised roof, carrying a Rosenbauer NH-1,500-gpm pump, 750-gallon water tank, and 20-gallon foam tank. “The engines have a high angle of approach, a 179-inch wheelbase, are less than 10 feet in overall height, carry four firefighters in the cab, and have Rosenbauer’s Green Star idle reduction technology,” Pimentel says. “These engines are best suited for our needs.”

Chris Trindad, battalion chief for the Madera County (CA) Fire Department/CAL FIRE, says his department got a Type 1 WUI engine from Rosenbauer built on a Warrior chassis and 54-inch cab with an 8-inch raised roof. The rig has a high angle of approach; is less than 10 feet in overall height; and carries a Rosenbauer NH-1,500-gpm pump, 750-gallon water tank, and 20-gallon foam tank.

Ed Boring, fleet sales manager for HME Ahrens-Fox, points out that WUI engines are named differently depending on the geographic location. “In California, they are referred to as Type 1 engines with interface capabilities,” Boring says, “and elsewhere as a WUI engine.” He adds that HME Ahrens-Fox makes a broad selection of engines that fit those definitions. “For instance, in California, departments are ordering Type 1 engines with a main pump of 1,500 gpm and also a diesel-driven or PTO-driven (power takeoff) auxiliary pump that delivers between 60 gpm and 250 gpm for pump-and-roll operations,” he says.

Boring notes that HME Ahrens-Fox also is building severe duty-style Type 1 WUI engines for CAL OES on a custom, high-clearance SFO® 4×4 chassis and MFD-XL cab that has a tight turning radius to allow the rig to negotiate twisting two-tracks and mountain trails. The CAL OES WUI pumpers have 1,500-gpm engine-driven pumps, 800-gallon water tanks, diesel-driven auxiliary pumps, and Class A foam systems. Boring says that some customers opt for the same type of pumper but on either International or Freightliner commercial chassis with four-door cabs.

Jay Adams, western regional manager for SVI Trucks, says his company is just getting into building pumpers for the WUI market. “Our WUI engine design features a short wheelbase, a minimum of a 15-degree angle of approach, and also a sharp angle of departure,” Adams says. “We take the self-contained breathing apparatus (SCBA) out of the cab and put them in a compartment because non-SCBA seats are more comfortable for those longer rides when the WUI engine is being called out of its district. We also have an auxiliary pump for pump and roll on our WUI design as well as a foam system that gives firefighters a big advantage in protecting structures in the interface.”