Ventilation equipment makers produce models that vary from small, compact units to large fans that can rapidly cool and clear big structures. But the most common types of ventilation equipment being used by fire departments are those that are designed to fit in typically sized fire apparatus compartments.

Roger Weinmeister, president of Super Vac, says that positive pressure ventilation (PPV) fans “are hands down the most popular of all the fans we offer.” He notes, “Smoke ejectors still have a fair number of fire departments using them, and there are some places where smoke ejectors are better to use, like in hospitals and prisons, as well as in large industrial settings. But the biggest percentage of fans that we sell to fire departments are PPV fans, and the largest percentage of those PPVs are battery-powered fans.”

Weinmeister points out that the PPV world evolved from two-cycle, gasoline-powered engines to 4-cycle gas engines, then single-speed electric motors, followed by variable-speed electric motors, and now are firmly in battery-powered mode. “The benefit of a battery-powered PPV fan is that the fire department can have its PPV fans, drills, and rescue tools all using the same batteries,” he observes.

In terms of the size of PPV fans being used, Weinmeister says that 16-inch and 18-inch models are usually the ones chosen for placement on engines, while truck companies often carry 20-inch and 24-inch PPV fans. “We offer a large lineup of PPV fans, from our 8-inch confined space fan to our 80-inch large-scale PPV fan,” he says.

Two of the most popular Super Vac PPV fan models are its Valor Series with a lightweight aluminum roll-cage design and its 7-Series with a steel frame design. The Valor series is available in 16-, 18-, and 20-inch models powered by either DeWalt or Milwaukee Tool batteries. Both Valor and 7-Series models are available in 16-, 18-, 20-, and 24-inch versions powered by single-speed electric, variable-speed electric, or hazardous location motors.

Zach Allen, vice president of Euramco Group, agrees that battery-powered PPV fans have completely taken over the market. “In the last five years, the biggest thing in fans is the battery-powered units,” Allen observes. “At Euramco, we design and build our own battery packs, electronic circuit boards, and brushless motors to fit our products. Our PPV fans incorporate a heat management system, an aluminum casing, a 360-degree heat sink, and temperature sensors throughout the battery pack to monitor heat.”

He says the W50Li RAMFAN PPV fan was introduced in 2017 with a battery hot-swapping Intellisense E2 system, a 700-watt brushless motor, and on-tool charging.

“In 2019, we came out with the EX150Li which featured the Intellisense E3 system, a 1.4-kilowatt brushless motor, and a battery management system for our lithium-ion batteries,” Allen points out. “This year, we added PRO Connect on-tool diagnostics and a Super Charger that takes less than two hours to produce a full charge, and next year we will introduce a 2.4-kilowatt (almost 3.5 hp) brushless motor.”

Euramco’s most popular model with fire departments is the EX50Li, a 650w (watt) battery-powered 18-inch PPV fan that is usually found on pumpers and the EX150Li 1.9-hp (1400w) 18-inch battery powered PPV fan that has two battery packs that can provide 2-hp for 45 minutes, often placed on aerials and rescues.

“Our UB30 1-hp 8-inch electric confined space fan is a big seller to the fire and rescue service,” Allen notes. “The size of its ducting allows it to fit in a manhole or underground vault and still allow firefighters and rescuers to pass by. We also have a confined space kit with ducting and an integrated adapter that’s standard on every confined space fan we make.” 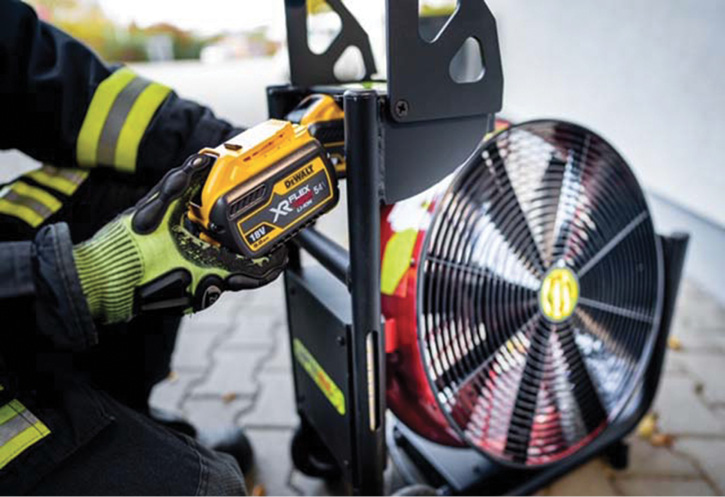 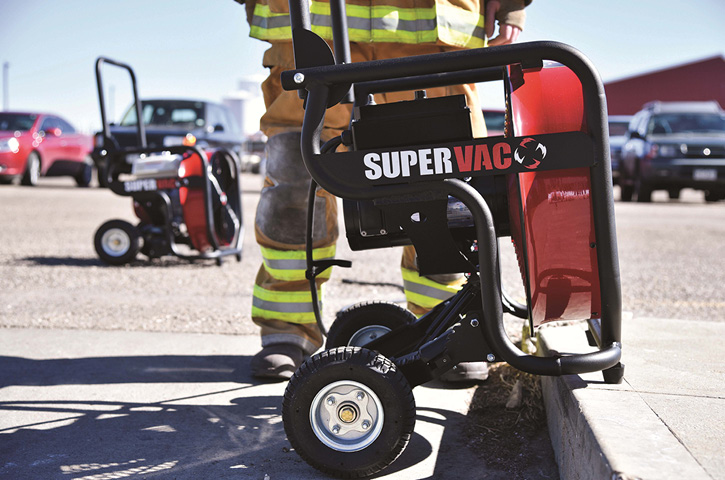 3 Super Vac makes the Nano 8-inch confined space fan that can be powered by a single-speed electric or a hazardous location motor. 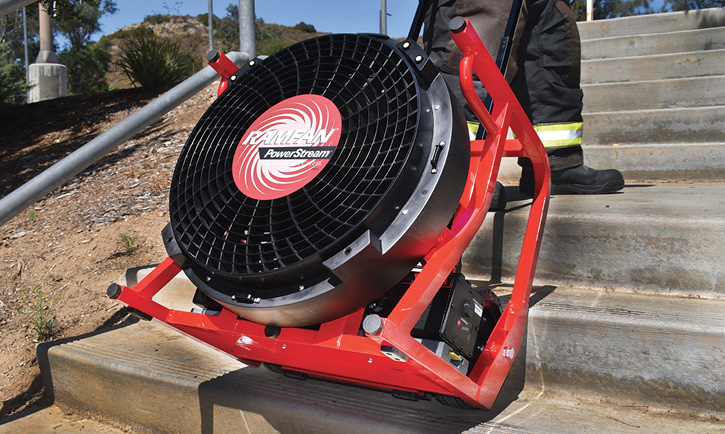 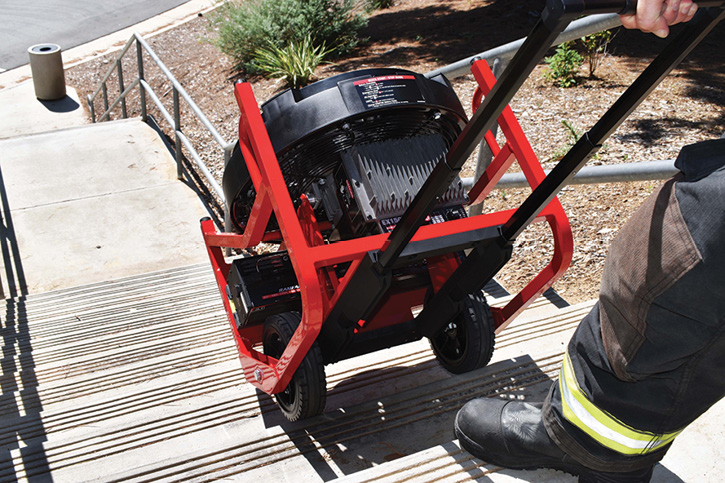 5 Euramco builds its own battery packs, electronic circuit boards, and brushless motors for all its products. 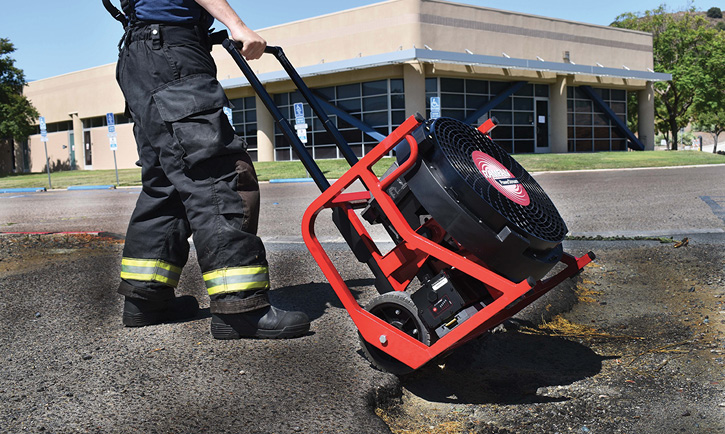 6 RAMFAN models made by Euramco have an Intellisense E3 system, PRO Connect diagnostics, and Super Charger that takes less than two hours to produce a full charge.

Euramco also makes the XP50 1.5-hp electric-powered PPV in an 18-inch model and the XP400 1.5-hp electric PPV in a 16-inch version. “In the fourth quarter of this year, we’ll introduce the EX550, a 2.4-kilowatt PPV fan, the first plug-in fan with brushless technology,” Allen points out. “Euramco’s goal is to replace all gasoline-powered fans that produce carbon monoxide with electric- and battery-powered fans.”

Allen sees challenges ahead for those manufacturers making more powerful PPV fans. “Fans are the equipment that consumes the most power on a fire scene other than the apparatus,” he says. “So, designing batteries that can stand up to heavy use and require less time to fully charge is very important. Euramco’s larger battery packs now take two hours to fully charge, down from four hours for previous versions. And battery cell manufacturers tell us that batteries can be expected to last for about 500 full charges.”