The Uniondale (NY) Fire Department, located in Long Island’s Nassau County, has been in existence since 1924. When it was first organized, the department consisted of a rescue company, a ladder company, and two engine companies. An EMS squad was added in the 1990s.

The fire district and has grown immensely in the past 20 years. The district encompasses three square miles with a population of 24,800 residents living in mostly single-family dwellings.

“Over the past several years, the fire district had begun the process of designing and purchasing new apparatus to replace some of the aging fleet,” states Commissioner Anthony Lebron. “We try to replace our apparatus every 15 years, if possible, based on our budget. Six years ago, we replaced one of our older 1996 Seagrave rear-mount ladders with a newer 2014 Seagrave quint. We liked the operation and Seagrave in general and wanted to replace our 17-year-old Sutphen Tower.”

Lebron continues: “We liked having an aerial and a tower ladder combination to respond in our diverse district as well as having both aerials as quints.”

Uniondale’s rear-mount quint responds to all residential fires and the tower responds to commercial fires including taxpayers, the college campuses, and multistory office buildings, according to Lebron.

“About three years ago, our apparatus procurement committee decided to begin working on the replacement of our Sutphen tower,” says Lebron. “Since we liked the simple operation of the Seagrave Aerialscope, we looked at their design. However, they never built a quint on the Seagrave chassis.”

Seagrave engineers never had much customer interest in quints, and it wasn’t something they had done before, Lebron reports.

“After much discussion with their engineers, we decided to start the engineering process for our fire district to have the first one built,” Lebron says. 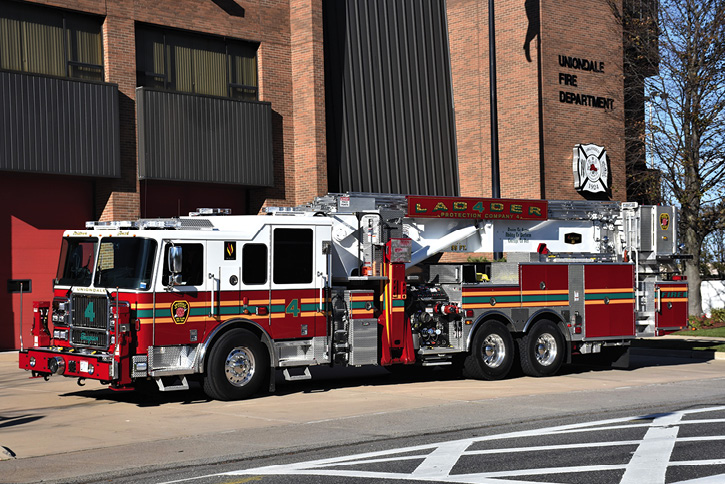 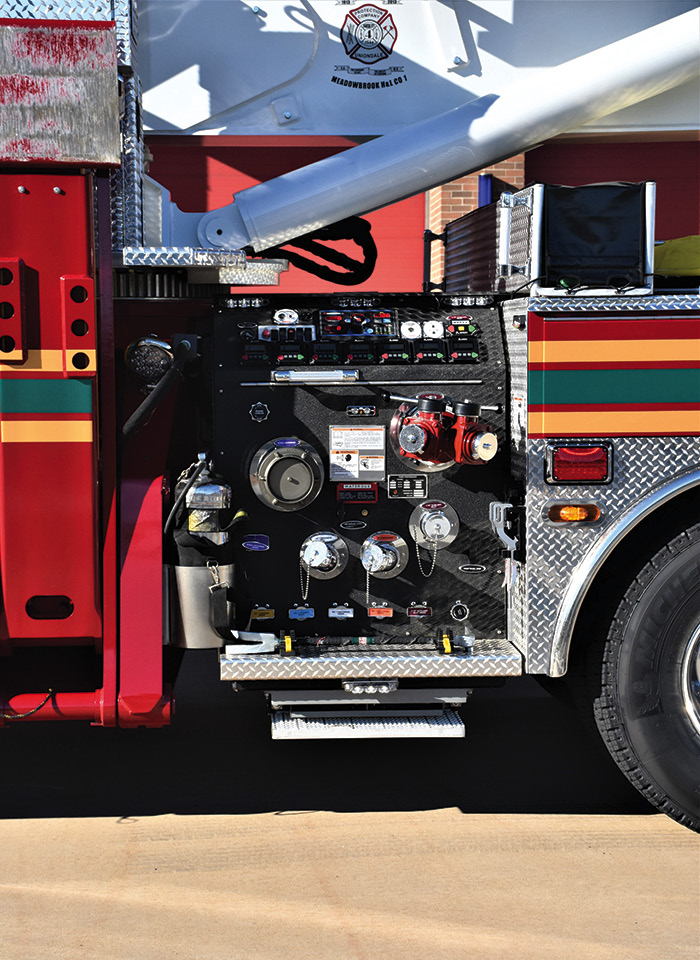 2 The pump panel behind the cab.

Uniondale used the Houston-Galveston Area Council (H-GAC) program for the purchase of the tower ladder, says Lebron, who adds that the district could “deal solely with Seagrave for this process.”

Because the apparatus would have a pump installed, two compartments were lost, but Lebron says it didn’t affect the number of tools the department could carry.

“We have a second piece that responds to fires called a tactical support unit that carries extra equipment such as fans, truck company tools, etc., so the loss of the two compartments was not a big concern for us,” Lebron says.

Some of the items designed into the truck, according to Lebron, include a 10-inch raised roof for the cab, two deluge guns in the bucket, and three roll-out drawers on each side of the body with all other compartments having standard shelving. The unit also has two electric reels, one on each side of the body, and all the scene lighting is powered by the 12-volt electrical system, he adds. 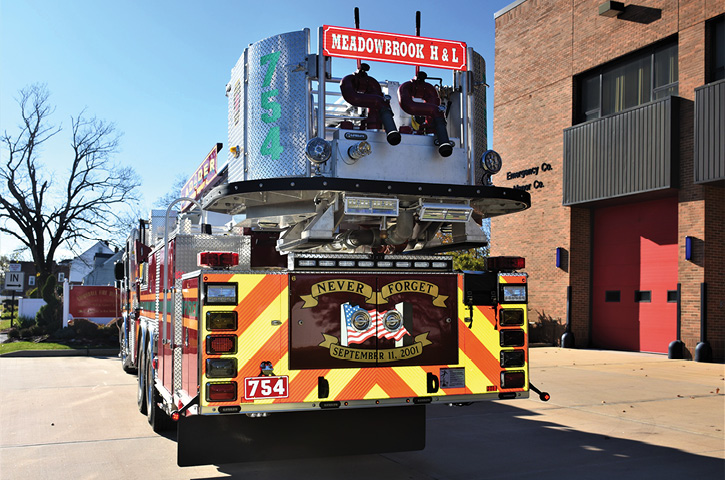 3 The rear of the ladder showing two deluge guns in the bucket. 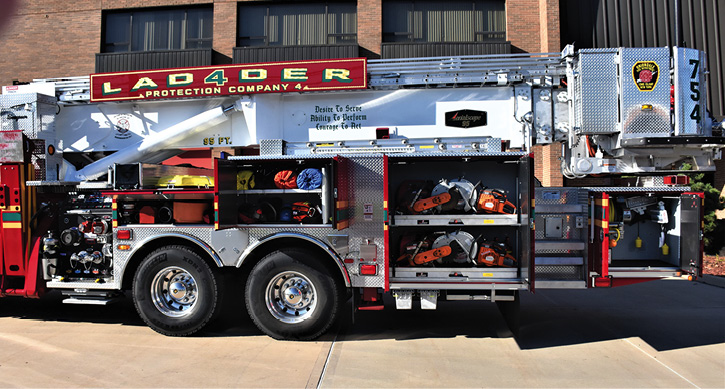 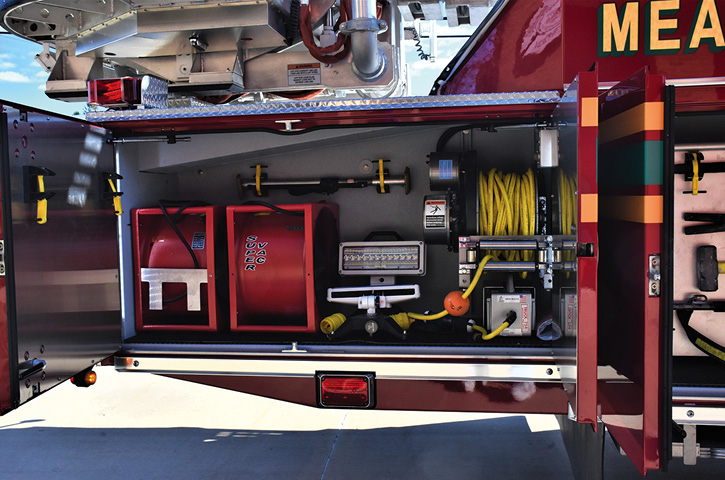 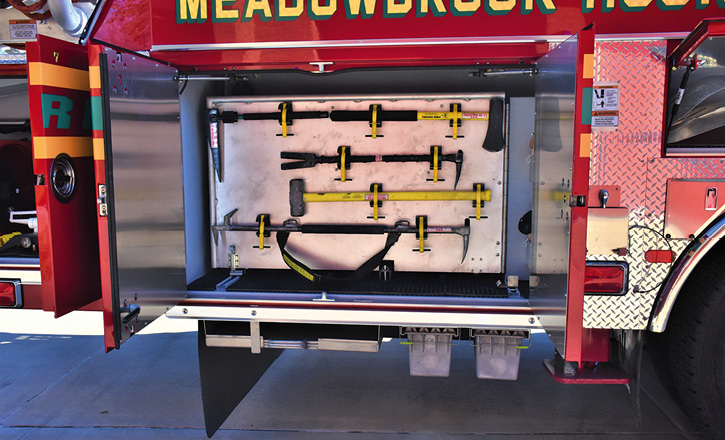 6 Forcible entry tools are in an officer’s side compartment.

“The compartments we have give us more than enough room for what we need to carry and operate with,” states Lebron. “All of the tool mounting was performed by the local dealer and placement of all tools and equipment was done taking all available space and using it to our advantage.”

Having a simple and fast operation to get the boom deployed was another concern for the department, Lebron says. “The outriggers are self-leveling and the boom sets up really fast, much to our advantage,” he says.

Lebron states that dealing with Seagrave and Rescue Vehicles, Inc., the company’s dealer serving Long Island, was great. “We made four trips out to the factory, from prebuild to final inspection,” he says. “Their engineers and salespeople helped us along the way with all our concerns and questions.”

Since taking delivery of the apparatus, Lebron says the department has trained extensively with it and has used it at several fires. “So far, the truck meets our expectations,” he reports.

As you can see, Uniondale took a proactive stance in designing its new aerial platform. The firefighters went to Seagrave and took their basic Aerialscope design, and their engineers designed the vehicle to have a pump installed.

In the past, the Aerialscope boom has been used on several Mack chassis that were designed as a quint but not on a Seagrave chassis. This new design worked for both Seagrave and Uniondale, and even though some compartment space was compromised, the outcome was satisfactory for both entities.

Proper planning and, in this case, reengineering a concept are not always easy tasks for both fire departments and fire apparatus manufacturers. Taking the time to plan well in advance and taking budget into consideration can make your apparatus purchase go a little easier for all involved.

Remember also, service after the sale is paramount. Make sure you can count on the manufacturer and the local dealer should you have any concerns after delivery.

Cantankerous Wisdom: A Diatribe on Suction Inlets and Custom Cabs