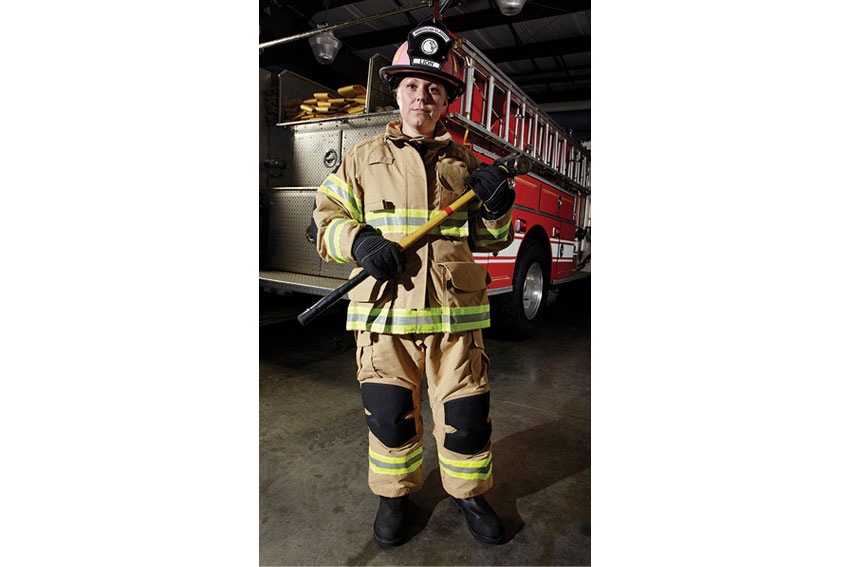 More and more women are entering the fire service, and personal protective equipment (PPE) manufacturers have responded by developing firefighting turnout gear specially designed for them. Various styles of coats and pants are available for female firefighters, crafted to fit their individual needs.

Meredith McQuerry, Ph.D., assistant professor at Florida State University and supervisor of its Textile Testing Laboratory, has been studying structural firefighting PPE for a decade and is running a study called the Investigation of Design, Comfort and Mobility Issues for Female Firefighters’ Personal Protective Clothing. “All the major structural PPE makers are participating in our study,” McQuerry points out, “which is funded by a $400,000 Federal Emergency Management Agency (FEMA) Assistance to Firefighters Grant. We are scanning female firefighters to collect their body measurements and scanning turnout gear too to collect that data. Then we will try to come up with a female sizing standard to address proportional issues and the differences between female and male body proportions.”

1 Lion has a variety of patterns tailored for women in its V-Force™ and other lines of structural turnout gear. (Photo courtesy of Lion.)

McQuerry notes that anthropometric data for the female firefighter population shows that females can have a hip circumference variation of 12 inches compared with a male’s variation of five inches. “So, turnout pants might accommodate a female in the hips but be way too large in the waist,” she says. “A female might have to order a larger jacket for the bust measurement but, when she is doing an overhead evolution, the gear may bunch and pinch.”

Cassandra Kwon, research assistant professor at the Wilson College of Textiles at North Carolina State University, who is working with McQuerry on the study, says that sizing and patterning need to be addressed in PPE for females. “Our initial research shows that the bulk of the turnout gear is an issue,” Kwon says. “In the trousers, the hip/waist ratio isn’t right, where it might be roomy in the waist and tight around the hips. And, the drop length at the front of the pant often is too long, which makes it more difficult for a female to lift up her leg to step onto an apparatus or climb stairs.”

Karen Lehtonen, vice president of innovation and product development for Lion, says Lion has a variety of patterns tailored for women in its V-Force® and other lines of structural turnout gear. “Our pants have a different rise and cut because of women’s hip-to-waist ratio, which is different than men’s,” Lehtonen says. “Our coats for females have a different sweep measurement compared to the chest measurement.”

Alysha Gray, Lion’s product marketing director for fire PPE, notes, “Sweep is the bottom circumference of the coat where you need more room for a female because of the hip measurement. We offer regular, long, and short length on coats, with the female length being an inch shorter on the regular style. In pants, where we make regular belted, lumbar, and high back versions, the female design is two inches shorter on the inseam, and the seat of the pant is bigger with a little more rise.”

Derrick Mitsch, product manager of turnout gear and boots for MSA Globe®, says the Globe ATHLETIX™ turnout gear has been available in both men’s and women’s fit since it launched. “We use different patterns for men and women, with all of our designs graded to a specific size and fit,” Mitsch says. “The coat tapers in the midsection and flares out a bit at the hips and also is a little narrower in the shoulders to avoid bunching of material that can come with added bulk.”

The Globe Pant System comes in men’s and women’s patterns, Mitsch adds, with a choice of fits in slim, regular, relaxed, and women’s. “As we develop new models, we make a significant effort to include women in our Voice of the Customer research to make sure that we have female patterns that fit right,” he says. “We also do some customization to accommodate special circumstances like custom lengths for shorter or taller people or a particular chest or stomach size for someone below or above average.”

Deana Stankowski, senior product marketing manager for Honeywell First Responder Products, says Honeywell makes Morning Pride® TAILS™ and VIPER turnout gear that are customized to 13 body measurements. “We make the gear fit firefighters exactly and can vary the inseam, hip, waist, and shoulder measurements to accommodate any body type,” Stankowski says. “The biggest variance we see in female turnout gear is in the pant because of the larger discrepancy between the waist and hip measurements. Men have a hip and waist measurement in more equal proportion, while women’s hips are wider than their waist.”

Stankowski notes that Honeywell makes its female PPE with a taper from the hips to the waist “so there’s less material, which means the woman’s doesn’t have to cinch as much because the pant is formed to her body. Generally, inseams and crotch rises are shorter too in the female pant.” Honeywell makes its pant inseams in one-inch increments and its sleeve lengths in half-inch increments.

Todd Herring, director of marketing for Fire-Dex, notes that Fire-Dex has women’s designs and specific patterns in all three of its PPE lines, FXR, FXM, and FXA. “We recently redesigned the FXR pant so that it gives better ergonomics for both men and women,” Herring says. “The big difference in the pant for women is the hip-to-waist ratio and the rise of the pant, which can affect vertical mobility, so we incorporate a gusset into the front and back rise.”

Herring points out that its FXR turnout gear is designed to minimize firefighter stress and fatigue through Active Posture Design™ to allow a full range of motion, with a tapered hem coat that’s longer in back and shorter in front, an OmniDex™ Shoulder that eliminates coat rise and sleeve retraction, and elbow pleats that bend the sleeve to the natural shape of the arm for less restriction in movement.

Doug Dafler, director of sales for Veridian, says Veridian offers female-designed PPE in its Velocity, Vanguard, and Valor lines. “The chief differences are in the waist-to-hip ratio and the fact that women tend to have a shorter torso than men, which is important for the length of the jacket,” Dafler says. “Even on a woman with a comparable height to a man, she would have a shorter jacket. The other issue is the rise in the pant, where women would have a shorter rise because of the length of the torso. We make adjustments for that because a higher rise would mean more material and the potential for bunching and sagging.”

Thermal Imager Use at MVIs