Water tankers, known as tenders in some parts of the United States and Canada, are being used in increasingly versatile ways at fire scenes, serving as water shuttles and water sources as well as multirole apparatus. Responding to fire departments’ needs, manufacturers are customizing those rigs to best suit the application.

Wayde Kirvida, sales engineer for CustomFIRE, says the configuration of tankers depends on the part of the country where it will be used. “In the eastern United States, we’re seeing a lot more interest in pumper-tankers with big pumps, plenty of preconnects, and lots of compartment space, as well as a good size water tank,” Kirvida observes. “In the Midwest, we’re seeing a lot of tankers that have a pump on them used for nursing an engine and also for pump-and-roll applications. In the West, it’s similar to the Midwest, but they are more focused on water hauling and keeping the truck moving.”

Kirvida adds that a growing number of departments are using their tankers as blocking vehicles at fire and accident scenes. “Blocking is a big emphasis now, and there’s a lot more conversation about using tankers in that role,” he says. “We’ve seen a lot more traffic and message boards on tankers, to help them keep traffic clear of a scene.”

Joe Messmer, president of Summit Fire Apparatus, says tankers are being purchased for different roles in three ways. “The first is the simple water hauler with a portable pump in a compartment plumbed to the tank to get the water off,” Messmer says. “The second is with a Sidekick-type pump of 500 to 1,250 gallons per minute (gpm), carrying some large-diameter hose (LDH) and with a dump valve. The third is a pumper-tanker with a midship pump of 1,250 gpm or bigger, a full hosebed, a ladder complement, usually 2,000 gallons of water, and compartment space for all the equipment the department can get on it.” 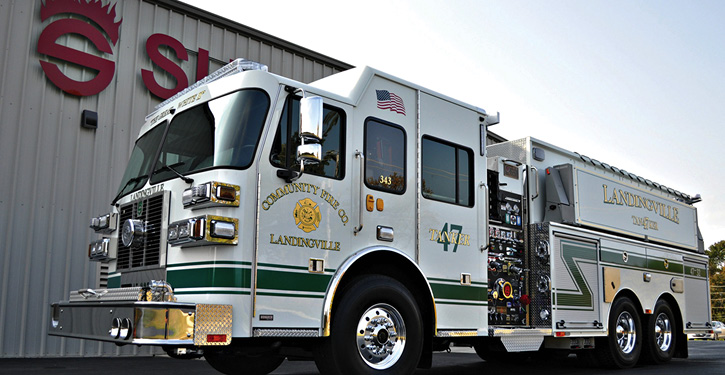 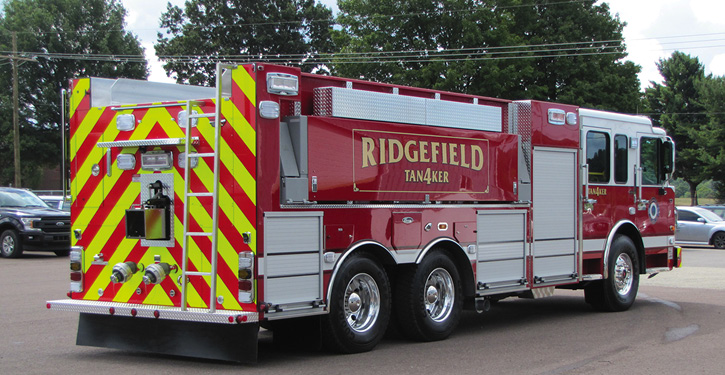 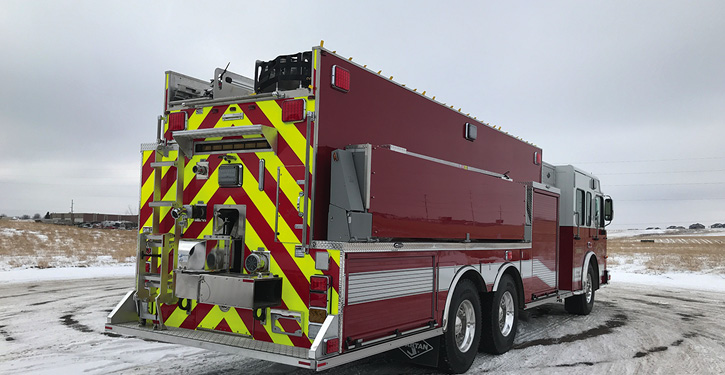 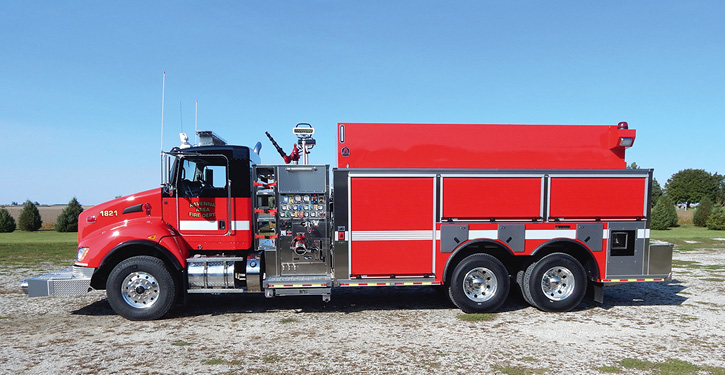 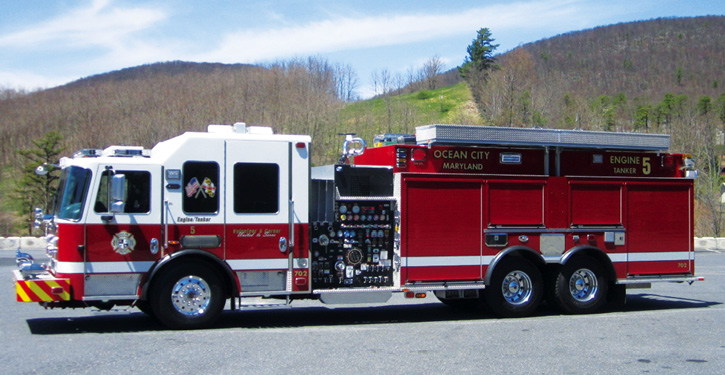 Darryl Rhyne, general manager of Sutphen East Corp., says that a lot of fire departments struggling with staffing issues, especially during the daytime, are choosing to buy pumper-tankers. “We build very few tankers without a pump on them,” Rhyne says. “About 60 percent of the tankers we build are what we’d call traditional types, usually on a commercial chassis, with a big water tank, an average size pump, and a couple of crosslays, because its primary role is to move water around.”

Mike Harstad, government sales manager for Rosenbauer, notes that Rosenbauer has been building a lot of pumper-tankers for customers. “They are treating their tankers like a pumper,” Harstad observes. “Besides a big water tank, they are putting rated pumps on the rigs, either crosslays or speedlays, a big hose complement in the hosebed, booster reels, and foam systems. In the past couple of years, we have seen departments choosing tandem rear axle pumper-tankers with 2,500- to 3,500-gallon water tanks and 1,500- to 2,000-gpm pumps by Darley, Waterous, or Hale Products.”

Harstad adds that some pumper-tankers are carrying full depth and full height compartments on one side of the rig and half height compartments on the other side to allow them to carry a portable water tank. “One of the more interesting trends is that tankers are becoming big hose carriers,” he says. “It’s not unusual to see a tanker carrying 1,000 feet of 5-inch LDH and 800 feet of 3-inch hose,” he says.

Brett Jensen, vice president and general manager of Midwest Fire, says 80 percent of the tankers Midwest builds are pumper-tankers. “Fire departments are trying to put two trucks into one,” Jensen says. “That means one less truck in the fleet to equip and maintain.” Jensen notes that all the vehicles Midwest builds are made of ¾-inch polypropylene. “Pumper-tankers with a 3,000-gallon water tank are the most popular,” he says

Mark Brenneman, assistant sales manager for 4 Guys Fire Trucks, says 70 percent of the tankers 4 Guys builds are square tankers, as opposed to elliptical models, and most of them are set up as pumper-tankers. “We hardly ever build a tanker with less than a 1,000-gpm pump,” Brenneman points out. “The trend today seems to be to go bigger. Those departments that were running 1,250-gpm pumps are going up to 1,500 and 2,000 gpm and moving up the size of the water tanks to 2,500 gallons or more.”

Wyatt Compton, product manager for Spartan ER, says his company recently built a pumper-tanker for Park County (WY) Fire District #2 on a Spartan chassis with a 1,500-gpm Waterous pump, a 3,000-gallon water tank, a 30-gallon Class A foam tank, a 60-gallon Class B foam tank, four crosslays totaling 800 feet of 1¾-inch hose, and a hosebed holding 1,500 feet of LDH supply line. “Park County needs to carry a lot of water as well as rescue tools on its pumper-tanker,” Compton points out, “so we maximized the water tank and equipment storage space on their vehicle.”

Ken Sebo, pumper business development manager for Pierce Manufacturing, notes Pierce has seen a trend toward the use of pumper-tankers. “We’re building them on single and tandem rear axles, with water tanks of 1,000 to 3,000 gallons, two or three crosslays, and pumps from 1,250 to 2,000 gpm,” Sebo says. “Some departments are putting turrets on the front bumper to allow them to take care of fires along the road, and often the compartments ahead of the wheels are full depth and full height that could accommodate rescue tools.” 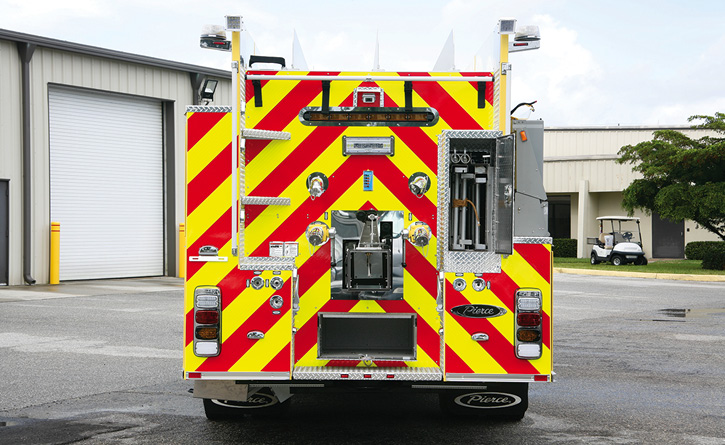 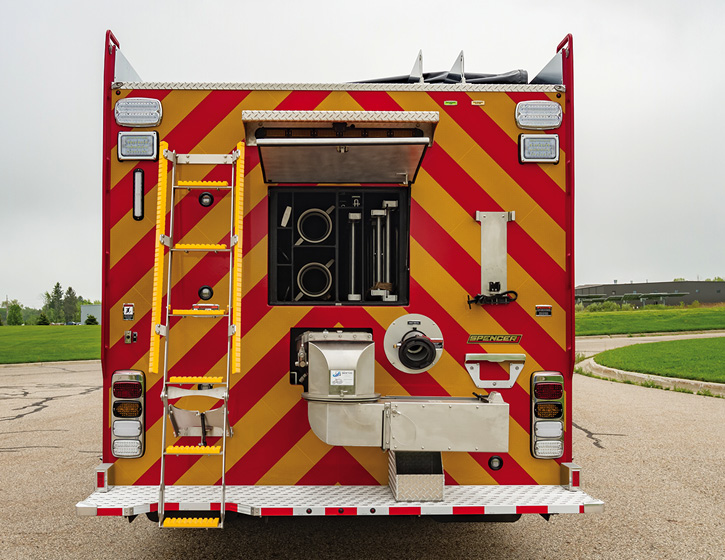 Tangi Rouse, product manager for E-ONE, says her company is building a lot more pumper-tankers than traditional water haulers at a 70 to 30 percent ratio. “They are usually carrying a 1,500-gpm or 2,000-gpm pump and 2,500 to 3,000 gallons of water on a tandem rear axle,” Rouse says.” She adds that E-ONE builds tankers on Quest®, Cyclone® II, and Typhoon® custom chassis and on Freightliner®, International®, Peterbilt®, and Kenworth® commercial chassis.

Jason Louque, director of sales for Ferrara Fire Apparatus, notes that 50 percent of the pumper-tankers Ferrara is building are on custom chassis and are split evenly between single and tandem rear axles. “We built a 1,500-gallon pumper-tanker for the Sweetwater (WY) Fire Department with compartmentation set up to carry rescue tools,” Louque says, “and another for the Walchester (IL) Fire Department that was to carry rescue tools, too.”