In Denver, Colorado, during the 1930s, Horis Hall was designing propellers for the aviation and maritime industries. Aerodynamic propeller design led to the creation of the Super Vac company and the introduction of smoke ejectors to the fire service by Hall in 1954.

The correlation between aircraft propellers and smoke ejectors is simple—both move air. Propeller rotation keeps aircraft in the sky. In simple firehouse speak, a smoke ejector or fan blade (propeller) creates high pressure on one side and reduces it on the other. The difference in pressure is what causes air to move.

Today, Super Vac Incorporated is a family-owned and -operated corporation encompassing multiple divisions located in a 160,000-square-foot facility on Redman Drive in Fort Collins, Colorado (photo 1). One of those divisions is SVI Trucks, which occupies more than half the space and employs more than half of the 150 employees building about 50 rigs a year (photo 2). 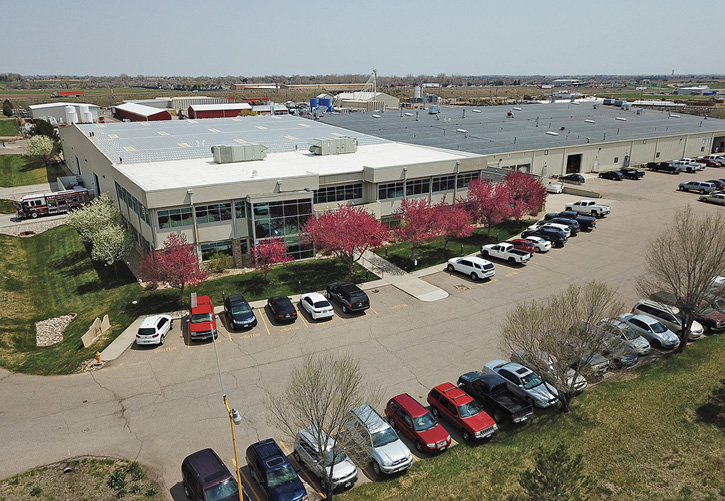 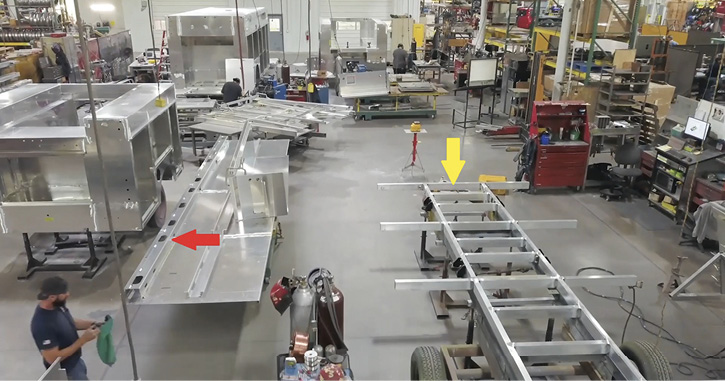 Other divisions include Super Vac, Command Light, SVI Graphics, SVI Refurb, and the SVI Foundry. Super Vac is the original smoke ejector and positive pressure fan manufacturer. Command Light has been around for 50 years, first building hydraulic and then electric light towers. SVI Graphics fabricates in house the chevrons, striping, and assorted graphics for numerous applications—including SVI apparatus. SVI Refurb is self-explanatory, as is the SVI Foundry.

The fourth-generation Weinmeister family includes brothers Ron, Roger, and sister Tammy. The siblings’ father is Erv Weinmeister, who was preceded by Henry Zeiler—the current Weinmeister’s grandfather and before that by their great-grandfather Horis Hall—the founder. Two members of the next generation, the fifth, are currently employed at SVI.

When Erv Weinmeister was a volunteer firefighter, he built the first Super Vac rescue truck for the Loveland (CO) Fire Department in 1971 (photo 3). It was the official start of SVI Trucks, a division of Super Vac, Inc. The rig was a C-Series Ford cab forward chassis with a walk-around rescue body. Fifteen years later, the same body was remounted on a Chevrolet chassis. Now known as the Loveland Rural Fire Authority, the department has regularly purchased SVI apparatus including pumpers and rescues. The most recent is a 2020 pumper (photo 4). 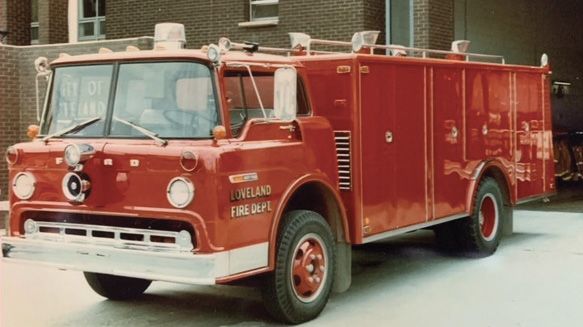 4 Loveland’s most recent SVI purchase is this two-stage 1,500-gpm, 750-gallon rescue-pumper on a Spartan chassis. It has a short 184-inch wheelbase, double high side compartments, hydraulic ladder rack, and multiple rear discharges.

SVI: “In 1985, SVI Trucks added refurbishing capabilities (www.svirefurb.com). Five bays in the plant are dedicated for refurbishing. They are separate from the regular production bays. There is also a separate workforce dedicated solely to refurbishing.”

SVI: “We have been building for departments around the country since the early ’80s. Since rescue trucks are a small market, we had to reach out of our region in the early years. SVI has around 30 dealers throughout the United States.” Safetek, their Canadian dealer, has sold multiple SVI apparatus including heavy and medium rescues, “wet” rescues, brush trucks, hazmat rigs, custom pumpers, and Type 3 and Type 6 wildland apparatus.

When asked why SVI began building pump equipped apparatus, Ron Weinmeister replied: “We started to see more combination apparatus being requested such as rescue-pumpers and ‘wet’ rescues.” In reviewing SVI’s pumper deliveries, almost all feature rescue-style bodies as well as many unique designs.

Questioned whether there could be a problem when a dealer that sells another OEM’s pump-equipped apparatus also sells an SVI pumper, Weinmeister said: “It is not a focus item. SVI is primarily a custom rescue truck builder. The few pumpers we manufacture are usually per a fire department’s specific request. These pumpers, like our rescue trucks, are often highly customized and more often a ‘one-of-a-kind’ build that many OEM partners are reluctant to build.”

5 Colorado’s Poudre Fire Authority in Fort Collins purchased this large tandem axled walk-in rescue with a 276-inch wheelbase and a 26-foot body on a Spartan extended cab with raised roof, Command Light tower, and six body equipment compartments on each side featuring hinged doors—except for one on the left side with a roll-up door. 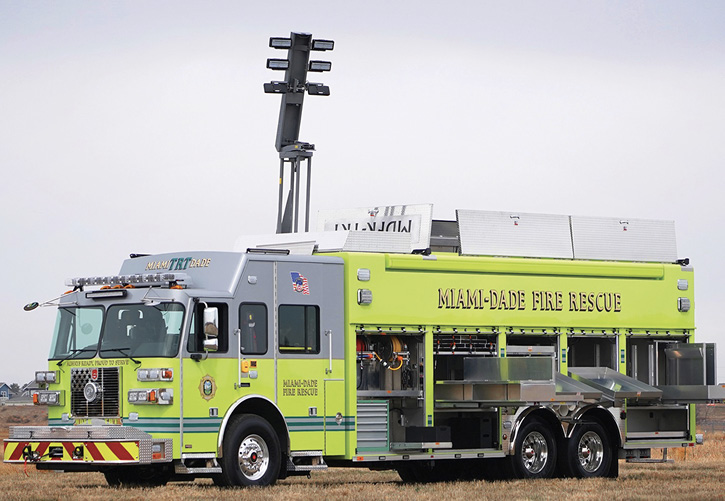 7 This heavy rescue is one of two delivered to the Charlotte (NC) Fire Department. SVI is no longer considered a regional builder as demonstrated by other heavy rescues delivered throughout the country to cities such as Honolulu, St. Louis, Philadelphia, Fort Worth, and White Plains (NY). 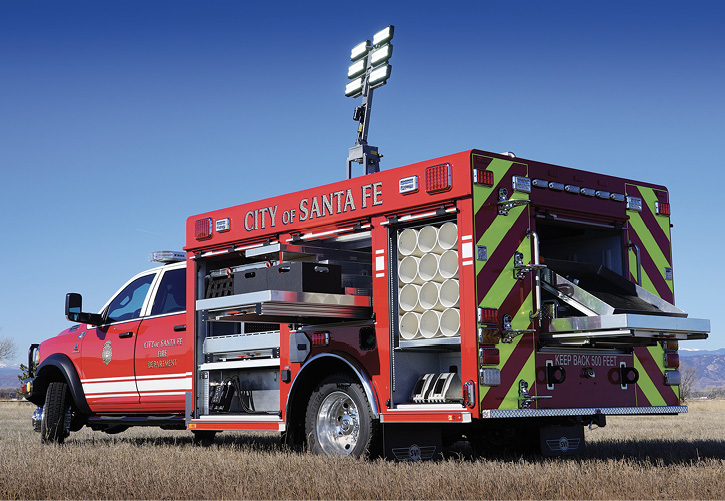 8 The Santa Fe (NM) Fire Department purchased an SVI light rescue on a Dodge 4×4 chassis with a crew cab. It features a 15,000-watt PTO-operated generator and a Command Light tower. SVI defines a light rescue as one with a 9- to 14-foot walk-around aluminum body long mounted on a 10,000- to 23,500-pound GVWR commercial chassis.

9 Summit (CO) Fire EMS is an amalgamation of several small county fire departments, including Lake Dillon Fire-EMS, where this SVI Type III 750-gpm, 500-gallon wildland engine was delivered. It also features a Darley auxiliary pump and an onboard FoamPro system mounted on a Freightliner four-door 4×4 chassis.

SVI: “We have in-house service, repair and refurbishing for all our local customers. It really doesn’t get much better than going straight to the OEM for your service needs. All of our dealers either have in-house service and warranty or they have partnered with a local shop that provides service. In some cases, fire departments prefer to oversee and do their own warranty and repair work. We provide them support and reimburse them as we would a dealer.”

SVI: “Seventy percent of our production is for rescues, 30% for pumpers, 10% for tankers, with the balance for mini-pumpers and Type 6 wildland units and an occasional specialized vehicle like a command center and law enforcement vehicle. About 65% of the rescues and 90% of the pumpers are built on custom cabs and chassis. We built a demonstrator heavy rescue, medium rescue, and mini pumper in both 2018 and 2019 and all were sold. But in the last few years we have not due to COVID impacting shows.”

The Web site depicts in detail the actual methods of construction. SVI’s site is unlike some manufacturers that may not show the intricacies of body fabrication. Accessible on the site under “recent apparatus deliveries and various completed projects,” SVI provides numerous photographs, detailed specifications, and blueprints of the rigs featured. Numerous “walk-around virtual tour” videos of apparatus and the plant itself are also accessible online.

SVI: “We use all brands of poly tanks, and SVI Refurb can also do repairs or replace. We manufacture our own pump houses of aluminum. Pump panels are specifically designed for each rig; however, if a customer insists, we will use an outside vendor OEM-supplied prefabricated pump module. The same applies to vendor-supplied pump discharge and suction manifolds; however, most of the time we build them in house. All are stainless steel. SVI uses Hale, Waterous, and Darley pumps.”

Except for “repeat orders” or multiple-unit orders such as two heavy rescues delivered to both Charlotte, North Carolina, and Honolulu, Hawaii, I would characterize SVI as a custom builder where each rig, regardless of size or function, is different because it is tailored to each customer’s unique requirements. I also believe the customers of SVI-built rescues influenced SVI into building them pump-equipped apparatus. SVI calls its rigs “rock solid.” A saying on its Web site is: “If you can dream it, we can build it.”