Equipment manufacturers have expanded their lines of monitors and nozzles available to be fitted on industrial firefighting engines and aerials and aircraft rescue and firefighting (ARFF) rigs, with many departments choosing remote control models, although manual versions still are in favor for some applications.

Jeff Hicks, OEM channel manager for Task Force Tips (TFT), says for industrial applications, the monitor most chosen by fire departments is the Tsunami model, which can flow up to 8,000 gallons per minute (gpm). “Very often, a custom industrial pumper will have a TFT Tsunami with an 8-inch waterway located as a deck gun in the middle of the vehicle and then have two TFT Monsoon 2,000-gpm monitors located at the rear of the vehicle, one on each corner,” Hicks points out. “With the right number of inlets on the pumper and either a pressurized water source or availability to draft large amounts of water, the pumper could put 12,000 gpm on a fire or allocate one monitor for the fire and the other two for exposure control.”

Hicks notes that Dominic Colletti has joined TFT as industrial commercial channel manager. Hicks says, “TFT’s long-term plan is to bring Dominic in to determine what voice of the customer markets are looking for. He’ll be looking for feedback on the use of the Tsunami and Monsoon monitors, and if his data suggest that we need to design larger monitors for the industrial market, then we would consider that.”

Hicks adds the Tsunami and Monsoon monitors are available in remote control and manual versions and can be affixed to trailers and on fireboats if situations dictate that need.

“The monitors also can work off the vehicle’s CAN BUS system in addition as a wireless remote monitor, which gives the fire department a lot of flexibility,” he says. “A lot of customers like to pair one or more of the monitors with our Vortex nozzle that allows a straight stream of water to be twisted into a dispersed pattern whose width can be controlled by the operator.”

Colletti notes that some TFT customers are choosing to put either a TFT industrial valve under monitor (IVUM) or a hydrant under monitor (HUM) on their vehicles. “We have different outlets available for the customer’s choice,” he says. “On either valve, you can run a large-diameter hose (LDH) or a couple of 2½-inch outlets off of it, which gives the user a lot of flexibility that complement’s the monitors’ performance.”

David Durstine, vice president of marketing for IDEX Fire & Safety, points out that with industrial firefighting apparatus, it’s all about big water flow. “Departments look for the right combination of monitor and nozzle for their specific application,” Durstine observes. “The situation isn’t always a big petrochemical storage tank; sometimes it might be a tractor trailer tanker rollover.”

Durstine says Akron Brass’s largest flowing monitor is the Renegade at 5,000 gpm, which is available in electric or wireless control and has a 135-degree range of vertical travel. “We also have the AeroMaster™12 electronic monitor that’s capable of delivering over 3,000 gpm of water,” Durstine notes. “The AeroMaster12 has a 355-degree rotational range and 190 degrees of vertical travel, as well as friction loss of less than 25 pounds per square inch (psi) at 3,000 gpm. We designed this monitor and its nozzle in unison through 3D design where we used computational fluid dynamics to map the water out through the waterway before we even made the first part. The design gives it 410 feet of reach with water and more than 360 feet of reach of foam with a tight foam placement.”

Another Akron Brass monitor found on industrial fire apparatus is the 3480 StreamMaster II™, according to Durstine. “This electric monitor has absolute position sensors, which provide advance features and programmable functions such as obstacle avoidance, oscillation, and stow and deploy positions,” he says. “The StreamMaster II has a 355-degree rotation range and a 165-degree elevation range.”

Sarah Peck, IDEX OEM account manager, says that for ARFF applications, Akron Brass makes the 3356 Trident HFRT (high flow roof turret) that has flow ranges from 350 gpm to 2,000 gpm. “The Trident has a horizontal rotation of up to 355 degrees and a vertical travel from plus 70 degrees to minus 30 degrees,” Peck points out. “We also make the 3352 TuckAway Bumper Turret that flows from 250 gpm to 1,000 gpm and the 4040 Akrochem Master Stream Nozzle with electric pattern actuation, which provides both dry chemical and foam/water application options. Akrochem nozzles are designed for flowing from 250 gpm to 1,250 gpm at an operating pressure of 100 psi,” she adds. 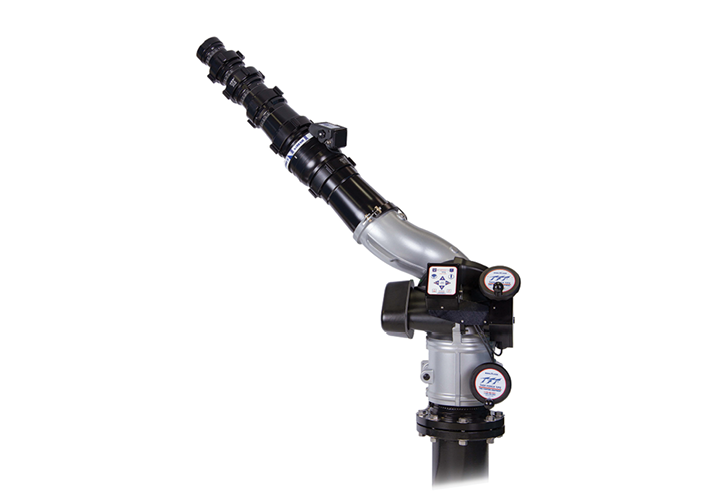 1 Task Force Tips makes the Tsunami monitor, which can flow up to 8,000 gpm, shown with a set of stacked tips. (Photos 1-2 courtesy of Task Force Tips.) 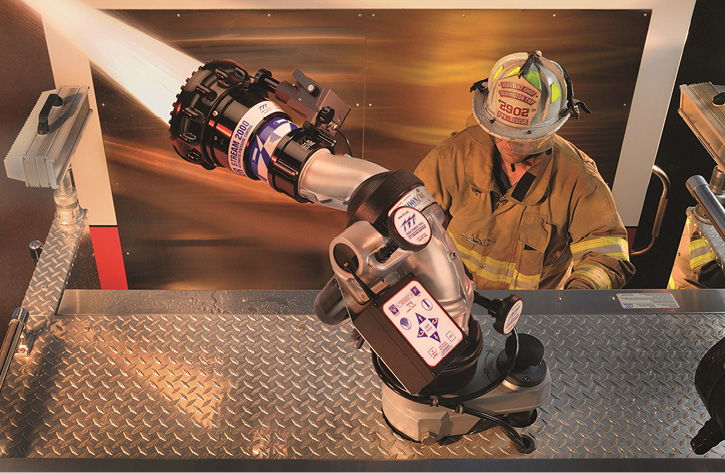 2 The Monsoon monitor made by Task Force Tips has a flow rate of 2,000 gpm. 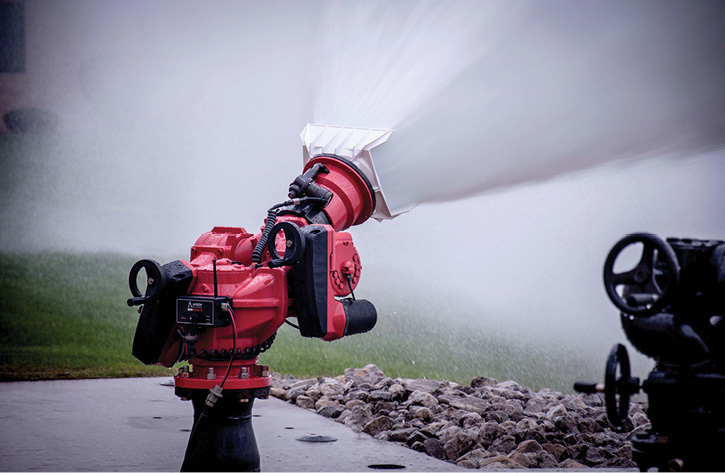 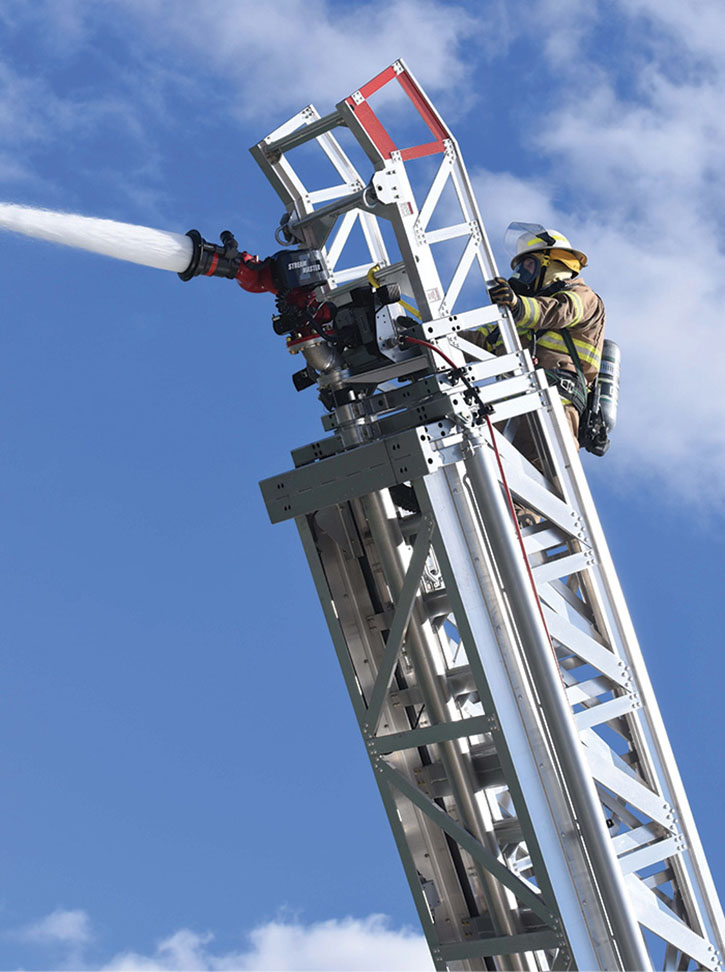 5 Rosenbauer makes the RM65 turret with a piercing nozzle on its HRET mounted on this Panther 6×6 ARFF truck it built for the Houston (TX) Fire Department to protect the William P. Hobby Airport. (Photo 5 courtesy of Rosenbauer.) 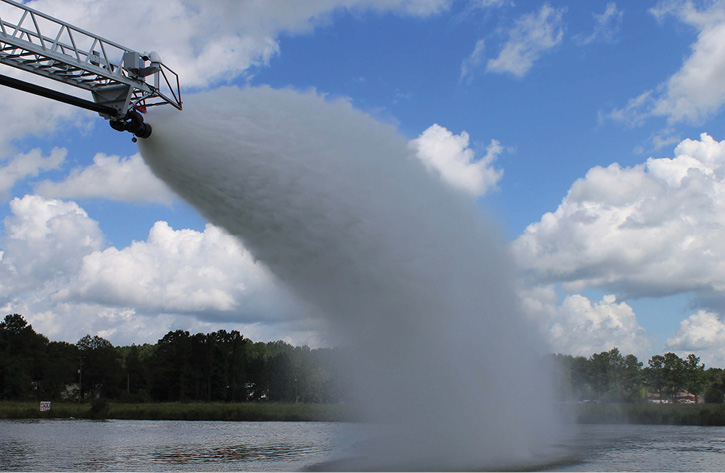 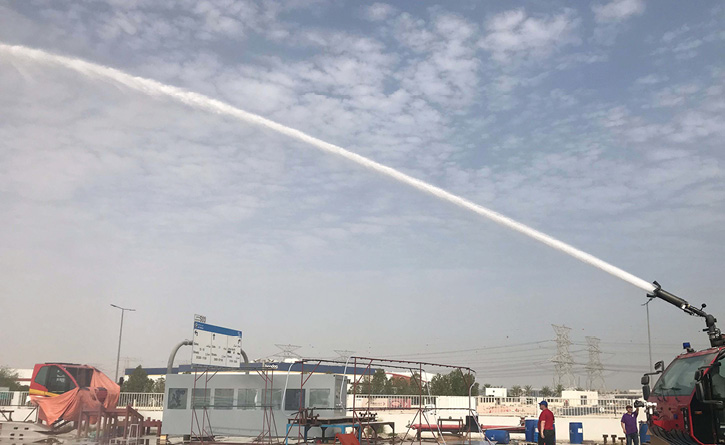 7 Elkhart Brass Company makes the Cobra EXM2 monitor that is commonly used on ARFF trucks, shown operating with an air-aspirated foam tube to allow it to deliver water and foam simultaneously.

Duane Kann, eastern region sales manager for Rosenbauer, says Rosenbauer makes the RM65 and RM35 turrets for its ARFF vehicles. “The RM35 turret is a standard upper and bumper turret and comes with either a ChemCore nozzle that imbeds dry chemical in the center of the water stream or a water/foam/fog nozzle,” Kann says. “The RM65 turret is used on the HRET (high reach extendible turret) on the Panther 6×6 ARFF truck. The HRET is 54 feet long and is able to fire a Stinger piercing tip through an aircraft’s skin, instead of pushing it through with the boom. The RM65 turret with the HRET is available with the ChemCore nozzle or a water/foam nozzle.”

Keith Chard, OEM product manager for apparatus monitors at Elkhart Brass Co., a division of Safe Fleet, says Elkhart Brass makes three monitors commonly found on industrial fire apparatus—the Scorpion EXM2, the Skystream EXM2, and the Magnum EXM2. Elkhart’s big gun for industrial use is the Wi-Fi-capable Magnum EXM2, Chard notes, which will flow up to 5,000 gpm. The monitor is made from hard-anodized lightweight Elk-O-Lite® material with a variable cross-sectional and vaned waterway, he says, has two gear motors to allow for simultaneous vertical and horizontal adjustment, 350 degrees of horizontal rotation, and 150 degrees of vertical movement from minus 60 degrees to plus 90 degrees.

For ARFF applications, Chard notes that the Elkhart Brass Cobra EXM2 is common on ARFF trucks, usually with an additional foam tube that delivers both water and foam simultaneously. “The Cobra EXM2 can flow up to 1,500 gpm with the addition of the foam tube,” Chard says. “The monitor is available in both wired and wireless versions and incorporates heavy-duty swivel joints and thrust rods for long-lasting durability.”