“We purchase two TDAs to be placed at Fire Station 1 (Downtown) and 35 (University City). They are built to the exact same specifications,” says Gaboury. “We are anticipating the purchase of at least two more with the same specifications as the first two. We continue to purchase Pierce apparatus for fleet standardization and familiarization for firefighters and mechanics.”

Gaboury adds that the benefits of continuing to buy apparatus from Pierce include operational consistency for engineers and all firefighters, with the ladder, cab controls, equipment, and layout the same or very close to it.

He adds that the benefits to fleet services include having fewer parts in stock, systems familiarization, like hydraulics, electrical and other critical features, as well as a single source for parts and service. 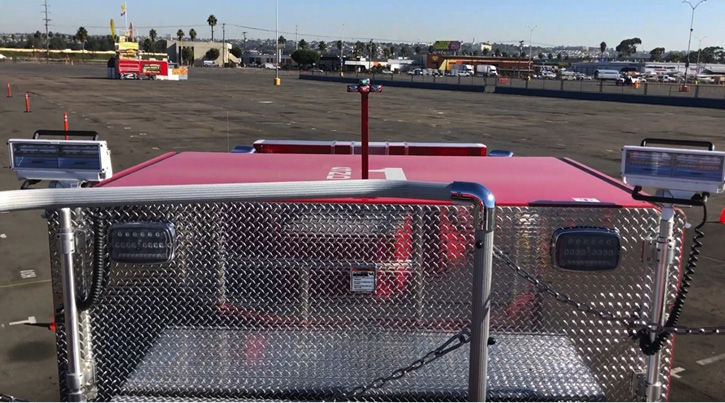 2 The thin vertical red stick between the two white LED spotlights is the Whelen OS*OOMCR centering lights for tiller driver focus, centering, navigation, and cab position at night. All exterior cab lights are either red or white LED as requested by the department. 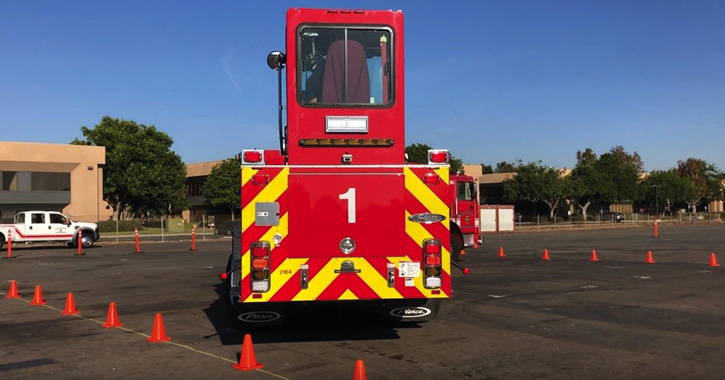 3 The rear of the tiller shows the large rear door that houses 163 feet of ground ladders and pike poles. A white spotlight and amber traffic directing light are above the small backup camera on the tiller cab. The red corner lights and top red taillight are LED wigwags in an upper-to-lower diagonal blinking pattern.

4 With emergency lights on, the four white headlights on the cab and the red lights above are wigwags. The corner behind the bumper light is red-white wigwag. The Whelen lightbar strobes red in two oscillating patterns from left to right from the center of the bar. The red Whelen LED lights on the cab and tiller sides are wigwags in a diagonal upper-to-lower corner pattern.

The SDFD’s aluminum body Pierce Ascendant TDA Number 1 (Downtown Truck 1) weighs approximately 78,000 pounds and costs $1.6 million, including the equipment carried on it. The same is true for University City’s Truck 35.

“The Pierce Arrow cab design allows more headroom and greater visibility for the firefighters sitting in the back seats,” according to Gaboury. The apparatus seats six: five in the cab and one in the tiller.

Gaboury explains that the new Pierce “stick ladder” TDAs were selected over bucket ladders and 6×6 ladder trucks because of “maneuverability and the ability to access difficult district locations with a TDA vs. our current service aerials.”

The load of Truck 1 is more evenly distributed and has a much smoother ride because of improved suspension on the front cab axle and the rear tiller axle. 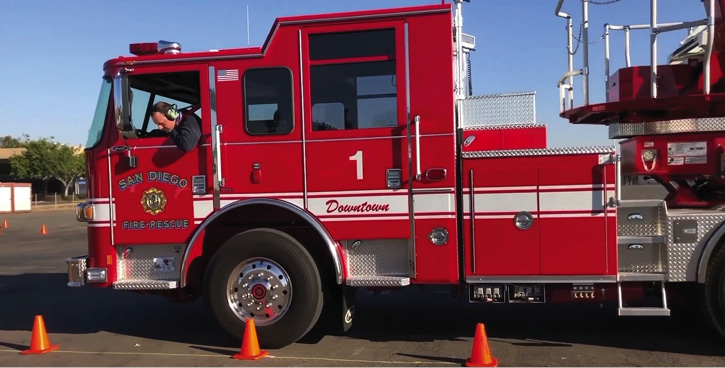 5 A driver practices maneuvering Truck 1 during training. Note the center red nut on the chrome hub, the tire chocks above the right cone, and the 4-door raised roof cab.

6 The tip of the ladder is equipped with a remote-controlled nozzle, a Reconnaissance camera, a two-way communication speaker, and blue LED lights; the ladder carries a 14-foot roof ladder and a chainsaw scabbard in the fly section. 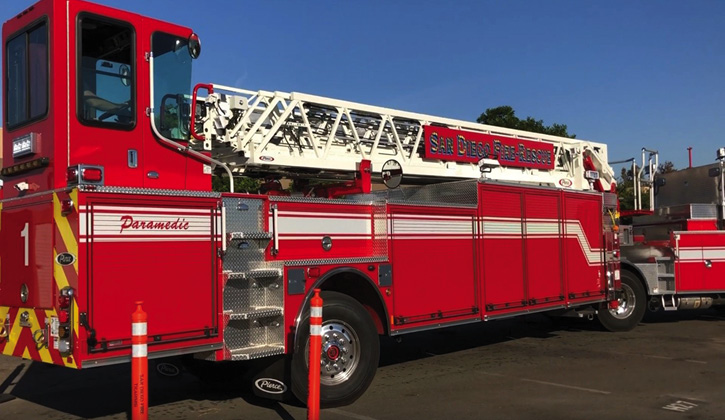 7 A rear-angle view of Truck 1 shows the two circular mirrors on the red bracket that the ladder rests on and the red nut in the center of the tiller’s chrome wheel. All SDFD first responder apparatus have a paramedic onboard; hence the labeling in red handwriting. 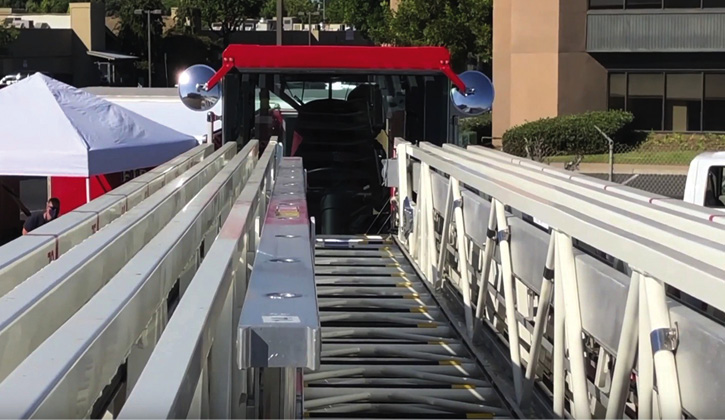 8 A view down the four-sectional aerial extension ladder looking at the tiller cab. The silver ladder in the center is a 14-foot (16-inch-wide) roof ladder attached to the aerial. At night, the rungs are lit by red LED lights and the top 10 feet are lit by blue LEDs. 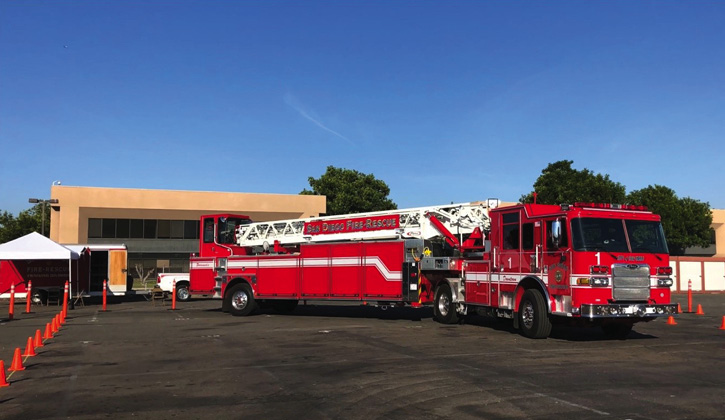 9 A side oblique view of Truck 1. The SDFD paints its TDAs in a bright red that seems to shine in the bright sun. The white reflective stripe is prominent in this shot. 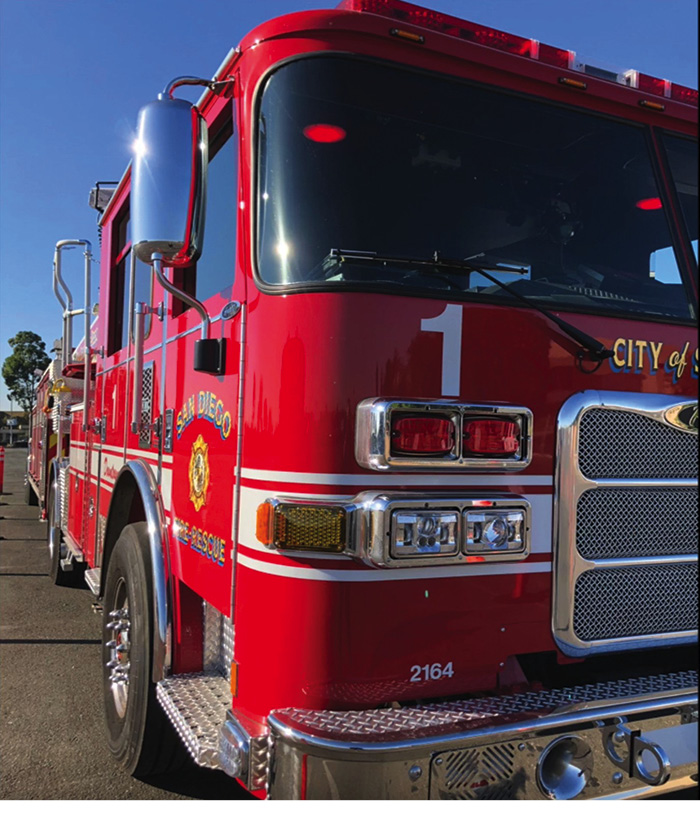 10 Oblique close-up of the cab showing the two headlights and red lights above that wigwag with their opposite counterparts on the other side when turned on during the day. Note the interior red lights inside the cab and the dark tint of the windows. 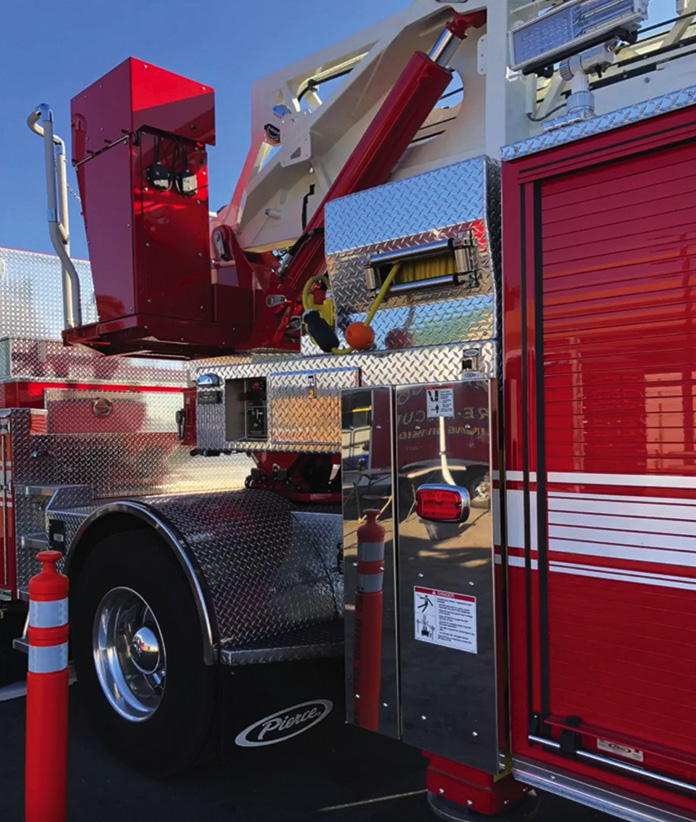 11  View of the fifth wheel and the cab’s rear axle. The yellow reel is 200 feet of Hannay ERC1618-17-18 electrical rewind cord located on both sides. A white Whelen Pioneer PCP2AP1 LED pedestal spotlight is above the roll-up door, with another one on the opposite side.

The SDFD learn a lesson in designing the new Pierce Truck 1 TDA, and that was the benefit of removing the preplumbed waterway from the apparatus. The department says the decision to delete the waterway was made because of the compromises in rescue operations and body mechanics. Also, the cost and maintenance required for the preplumbed waterway, the additional apparatus length, weight, and the marginal time increase of a manual ladder pipe evolution made it easy to take a pass on the preplumbed waterway. Instead, the fire department can deliver 1,500 gallons per minute (gpm) from a 3½-inch hose stored on the apparatus. The ladder pipe setup operation takes approximately 2 minutes 20 seconds with stabilizer jacks extended.

According to Chief Colin Stowell, “Storage and ergonomics are improved. There is much more storage. And firefighters have easier access to the equipment with fewer injuries to the firefighters. We nearly doubled the space in this truck.”

Peter Ong is a contributor to Fire Apparatus & Emergency Equipment and Fire Engineering.