The Breese Fire Department was seeking to purchase its first aerial vehicle, which would be added to the two engines, one tanker, and one utility terrain vehicle (UTV) brush rig the volunteer fire department was running in its fleet to cover a fire protection district featuring a mix of agricultural, residential, commercial, and industrial properties.

“Getting our first aerial was in the works for awhile because we believed it was easier to be proactive rather than reactive,” says Chief Thomas Tebbe. “The city of Breese and the surrounding communities have been growing in size, and the nearest aerial for mutual aid was between 10 and 40 minutes away from another volunteer fire department. We have a two-story hospital and a pair of two-story elementary schools in our district, so we had a need for an aerial; plus, we wanted to have an aerial master stream capability to handle the larger homes being built with steeper roofs.”

Tebbe notes that the fire department truck committee researched the aerials produced by several manufacturers. “We decided on an aerial platform as a safer aerial for our firefighters, compared to a straight stick,” Tebbe points out. “We spent a lot of time researching what we would use the aerial for in addition to fire suppression and as an aerial waterway. We determined we could use it in different technical rescue situations, like silo rescues and grain bin rescues, so we wanted to set it up for both low- and high-angle rescue, with rope tie-offs and connections and backboard and stokes basket brackets.” The fire district allocated the funds to purchase a 101-foot King Cobra articulating aerial platform quint from Rosenbauer. 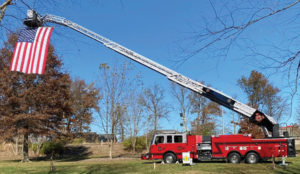 Service area: The department provides fire protection, rescue, and emergency medical services (EMS) to a 28-square-mile fire district with a population of 4,493.

Brandon Whittaker, Rosenbauer’s aerial sales manager, says Breese’s King Cobra quint has a 101-foot three-section rear-mount ladder with an eight-foot articulating jib. The articulating jib allows for easier and safer roof penetrations instead of using parapet ladders,” Whittaker points out, “although firefighters still have the parapet ladder option if they want to use it. Also, below grade operations are easier, and by using the articulating jib, firefighters can go 17 degrees below grade off of the rear of the truck.”

Whittaker adds that the King Cobra’s articulating jib means “it’s faster to extend the aerial from the cradle and bring the jib down in front of the cab to load the platform. It also takes less room at a fire scene where you can bring the bucket down in front of the cab and have EMS performed right there on a rescue, instead of needing an extra 20 to 30 feet around the truck, which would be necessary without the articulating jib. Also, the King Cobra can set up on a seven-degree uphill, 10-degree downhill, and 10-degree slope side to side.” 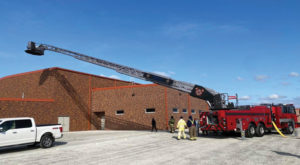 The quint is built on a Commander chassis and cab with seating for six firefighters. 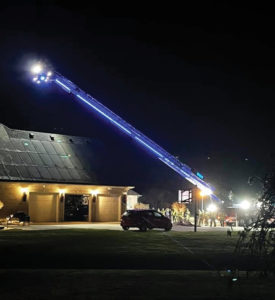 The quint is built on a Commander chassis with a 60-inch flat-roof cab with seating for six firefighters, five of which are in self-contained breathing apparatus (SCBA) seats, and is powered by a Cummins 505-horsepower (hp) XL15L engine and an Allison 4000 EVS automatic transmission. The vehicle has a wheelbase of 245 inches, an overall length of 47 feet 2 inches, and an overall height of 12 feet and has a 24,000-pound Hendrickson parabolic front axle and a 63,000-pound Hendrickson ULTIMAXX rear axle.

Steve Williams, Illinois apparatus sales specialist for Sentinel Emergency Solutions, who sold the King Cobra to Breese, says the department liked Rosenbauer’s Commander cab and originally had approached him about purchasing a 75-foot aerial quint. “But I brought them a King Cobra to demo, and they fell in love with the truck and with the potential it offered the department,” Williams says.

Williams says the department “especially liked the articulation of the platform and the Smart Aerial Controls, which allow auto bedding, programmable cabin and body protection, soft touch control, short jacking safely, and collision protection sensors around the outer edge of the platform. The department also liked the wireless operation of the four H-style outriggers, the aerial, and the monitor at the platform, because the wireless control allows the operator to step back from the truck and look at the platform from different angles when he is encountering obstacles or placing a water stream.”

Williams notes that the King Cobra’s aerial sections are hot-dipped galvanized and painted metallic silver, and the torque box and outriggers also are hot-dipped galvanized. “There’s a Task Force Tips 1,500-gpm Monsoon monitor at the platform, which has a 500-pound wet tip load and 1,000-pound dry tip load,” he says. “The vehicle also has lever bank pump controls, has a multiplexed V-Mux system, carries a Federal Signal light package, has HiViz LED headlights, and has an LED back-lit grille.”