One of the highlights of the “reopening of America” after the pandemic is the return of special events and public mass gatherings—or is it?

Huge concert tours, new racing facilities, and other massive public gatherings are slated for the Fall of 2021. I can guarantee you that they will be unlike anything you or your department may have encountered in prepandemic times.

Some readers know that I spent some 30 years in the event industry. My tenure started when I fell into a paid position of an emergency services coordinator for the 1984 Summer Olympic Games in Los Angeles. From there, I went on to work for some of the largest event, racing, and motion picture/television promoters in the world. I only offer this information to support the basis of this article and to establish that I know what I’m talking about.

Some fire departments across the country are called on weekly or daily to provide standby fire and emergency medical services for various events. Others are only called on when the event involves pyrotechnics (fireworks) for things like big concerts or the 4th of July celebrations. Still others may never get these kind of calls—until they do. Movie production companies are now traveling to remote, obscure, and rural locations. I live in a very rural area in the Rocky Mountains of Idaho. Just a stone’s throw from here, Paramount Studios is filming the Kevin Costner series “Yellowstone.”

With production companies as the example, have you noticed that TV, streaming, and theater releases have bigger stunts, larger explosions, and more special effects than those we saw even a few years ago? So what, you ask? Who do these companies call when stunts or special effects go sideways? Who does the local raceway call when it has a race car that goes into the spectator area? Who do giant music festival (50,000-plus attendees) promoters call when they want to set up a Woodstock-type show in a field near you? That’s so what.

I write about this topic because I have firsthand knowledge that the shows and events that will start rolling out in the early Fall will be bigger and crazier than ever before. New motorsports facilities are popping up all over the country; 1.5- and 2-mile superspeedways are being revamped into small half-mile tracks to attract new racing series and television contracts that will put more people into the grandstands on a weekly basis, as compared to their typical “few” big events in a season.

People have been cooped up for a long time. They want to “get out and let their hair down.” It is anticipated that these same folks will likely drink more and “indulge in other recreational inebriants” in ways that they may not have done since at least before COVID. This fact alone will mean more EMS calls and fire department responses. Unfortunately, this also means that fire departments will be called into dangerous and unpredictable situations. It’s beyond sad that we live in a time where wearing a uniform (even a fire department uniform) makes us targets for people intent on doing harm. 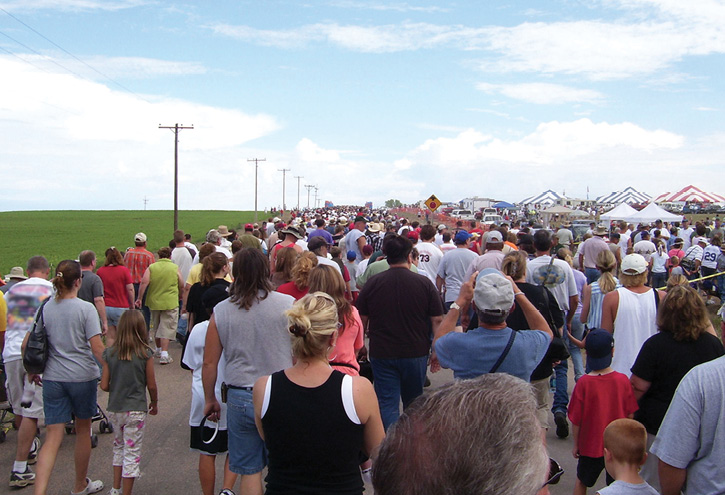 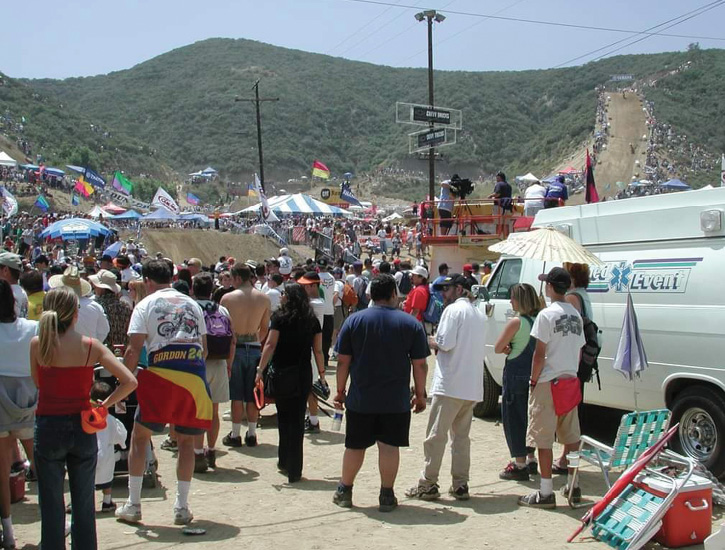 3 The stands are filled during a race at the California Speedway, formerly known as the Autoclub Speedway in Fontana, CA.

How can fire departments train for these types of events? Sure, we can train for certain things like race car rescue, but (and it’s a big but) training for even racing rescues on an empty racetrack is 1,000% different than having to perform an extrication or a patient extraction in the middle of 50,000 spectators. Anyone who’s ever been in a concert venue parking lot or on the infield of a superspeedway during a big race knows that just being able to get to a patient can often be next to impossible because of the sheer number of people. Extracting down concertgoers from a “mosh pit” is a whole other situation. And, if you’re thinking, “No worries, we’ll just have law enforcement pave the way for us,” you have another thing coming. That’s now the type of thinking that riots are made of.

Fire department event preplanning will likely be the key to your survival. I can also guarantee that preplanning event apparatus response will be a lifesaver. Long-wheel-based apparatus will not be able to navigate large, crowded parking lots no matter how good of a job the parking folks do.

Staffing and equipment might also need some tweaking. Once upon a time, a three-firefighter engine response to an event-related call was commonplace and safe. Today, I would strongly recommend more staffing. I wouldn’t want to leave an engineer or a chauffeur alone on an engine, nor would I want to send a two-person crew into a crowd. When I think about equipment needs, I’m reminded of what some East Coast departments do when responding to vehicle wrecks on gridlocked roadways. These departments have developed wheeled carts that contain the necessary tools and equipment for extrication that they can pull off the truck and wheel to the scene of the wreck. Some departments are fortunate to have golf-cart-type rigs or utility terrain vehicles that they can deploy at event sites, which allow crews easier and more agile access to patients or incidents on site. These vehicles often have patient transport capabilities that allow easier patient transfer to an awaiting ambulance.

If there is one “takeaway” from this article, I hope it is to understand that the event industry has changed, and event attendees have also changed. Events and productions are getting bigger, and entertainers are chomping at the bit to get back out and perform in the same way that John Q. Public is chomping at the bit to get out and be entertained. This can be a great combination, and it can also be an ugly combination. Add working at one of the aforementioned events in today’s world, and it multiplies the equation dramatically. With this in mind, never in our history as fire and EMS service providers has it been more important to keep our heads on a swivel.