After 25 years of service, the Two Harbors (MN) Fire Department’s number 1 fire engine needed replacement. The department knew it wouldn’t be an easy task and decided to take the time to come up with something different.

The geographical area served by Two Harbors is quite large—more than 400 square miles—and automatic aid is usually at least 30 minutes away. This means that the initial 30 minutes of a call could be short of staff, depending on the time and day. One of the goals with the replacement apparatus was to be able to deploy equipment safely and efficiently before a full crew is assembled. The truck committee wanted one firefighter to be able to set up equipment in a safe manner if needed. Even though more than one firefighter will be present at calls, the new apparatus design increases efficiency on the fireground by making it easier to deploy and access equipment.

One part of the apparatus that was explored to increase the safety and efficiency of the apparatus was the front bumper (photo 1). Two of the current apparatus have a hose well in the front bumper with 100 feet of 1¾-inch preconnect. The last apparatus replaced has a fairly standard bumper crosslay of two 200-foot 1¾-inch preconnects. It has been an easy way to stow the preconnects, but deployment is not always smooth. The department wanted two 200-foot preconnects on the front of the apparatus but wanted to see if there was a better way than the traditional front bumper crosslay. The department’s other apparatus used a modified minuteman load that can be deployed by one firefighter, who first must walk away from the apparatus to ensure all the hose is out of the bed. All handlines are packed with the 50-foot coupler next to the nozzle so stretched lines have at least 50 feet of workable hoseline with the nozzle.

One idea that interested the truck committee was seeing that some departments have two rolls (Dutch rolled) in a front hose well coupled together so the hoses unroll when deployed. Experimenting with that proved successful, but they questioned how to do it with 200 feet of hose. A wood box prototype was made to house four 50-foot Dutch-rolled hoses that could be interconnected and then deployed. Early experiments consisted of rollers on the bottom of the box and a roller for the hose to unroll over. Even with the rollers, the friction of four rolls uncoiling was significant. It could be unrolled by one firefighter, but it required quite a bit of effort.

Unsatisfied with the deployment but liking how the hose laid out, the department continued to experiment with the setup. The top roller was lowered using incremental steps to make it easier to unroll with the hose in the box. The friction still required a fair amount of effort to have the hoses unroll. Finally, the top roller was below the midpoint of the rolls. When pulled, the hose simply rolled out of the box and lay on the ground. Once on the ground, the hoses uncoiled easily. This defining moment led the prototype modification to have a cutout that allows the hose rolls to purposely roll out when pulled (photo 2). 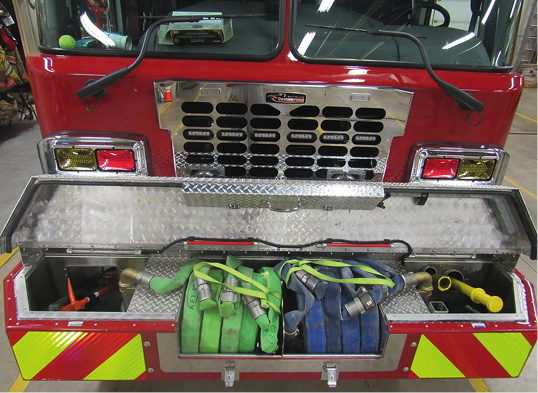 1 The front bumper was one of the more significant changes that improved efficiency. The front bumper is only 21 inches out from the cab and contains 400 feet of 1¾-inch preconnect, a set of irons, a piercing nozzle, a slide hammer, a hose roller, and additional storage for spare nozzles. (Photos by Ethan Cassady and Kaija Schlangen.) 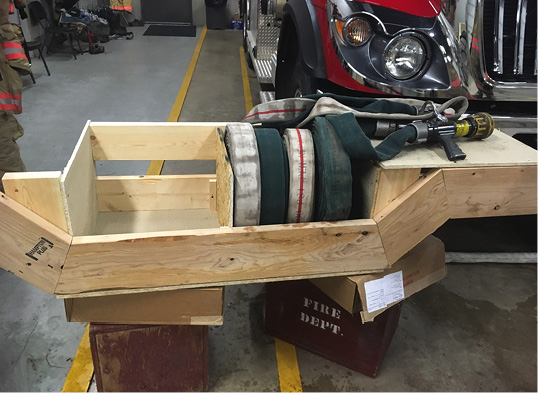 2 The final wooden prototype to test the idea.

After extensively testing the prototype throughout the winter, the department was finally satisfied with the plan. Members realized the usefulness of the prototype and sent a video of it to the apparatus builder, only to find out another customer—the Sister Bay (WI) Fire Department— was using a similar process. The department reached out to the chief, Chris Hecht, and was confident that the plan would work. The prototype idea was sent to the manufacturer and the front bumper was designed (photo 3). 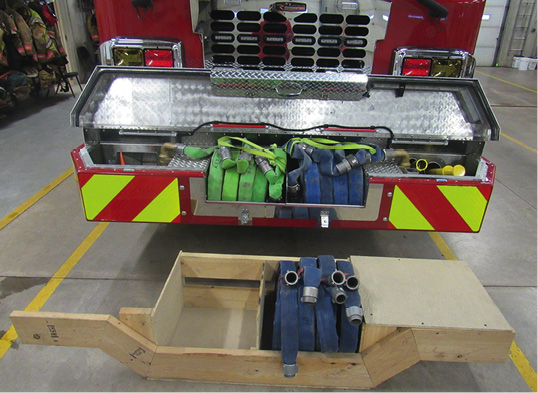 3 The prototype next to the finished bumper. The prototype allowed the department to experiment with configurations before sending the design idea to the manufacturer.

Another aspect of the front bumper was to use more space for equipment storage—specifically, having some hand tools available such as the piercing nozzle, a set of irons, and the slide hammer (photos 4 and 5). The department has been using the BEAST nozzle, which can quickly transform from a combination nozzle to a solid stream smooth bore to a piercing nozzle. The trouble with the nozzle was going back to the apparatus and having to get the piercing nozzle and slide hammer. Getting creative and requesting pockets at an angle made room for not only the piercing nozzle but also the slide hammer. The set of irons mounted in the front bumper was an easy addition, as the firefighter deploying the hose has a free hand and can grab the irons as well. 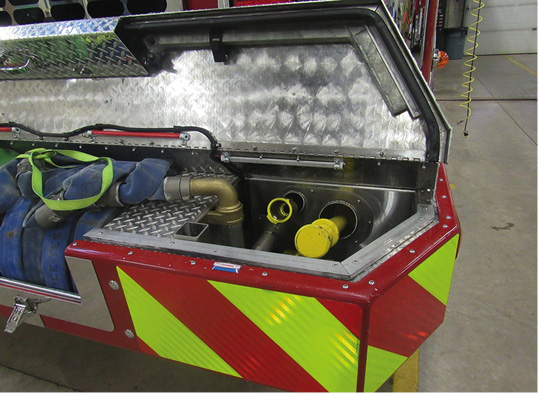 4 Angled pockets allow the piercing nozzle and slide hammer. Note: The hose winder stows in the underside of the cover. 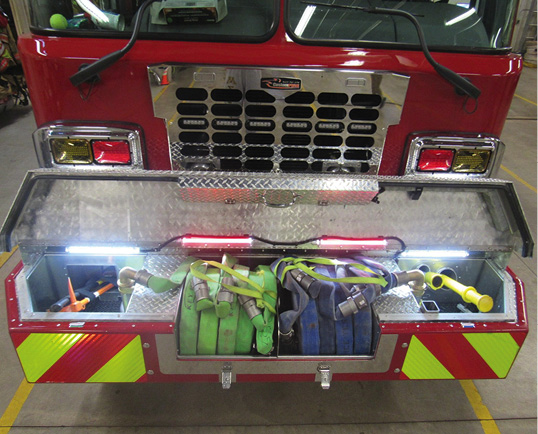 5 An angled pocket for a set of irons to be easily deployed on the left and pockets for a piercing nozzle and slide hammer on the right. 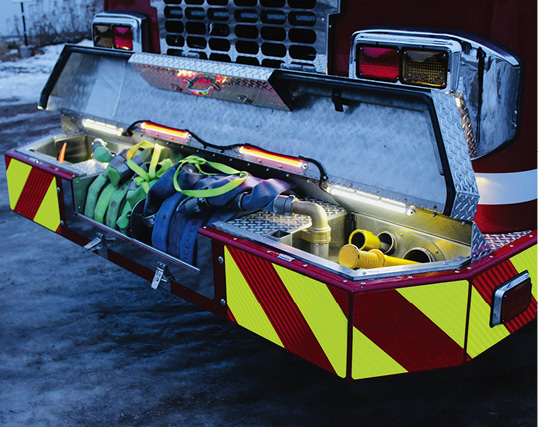 To deploy, the firefighter grabs the 50-foot coupler loop that is hooked to the nozzle and puts the same arm through the loops of the two exposed couplings (photo 7). The other hand grabs the set of irons or piercing nozzle (photo 8), and the firefighter walks away. As soon as the hose rolls out of the bumper, the firefighter is free to walk in any direction (photo 9). As the rolls unravel, the firefighter can drop couplings at any point, although it makes the most sense to hang on to the couplings until they are pulled tight (photo 10). Once positioned about 25 feet away from the target, the firefighter calls for water. Now, the firefighter has the nozzle and a 50-foot section of workable hose to start operations. In addition, all the remaining hose is in a ready-to-use formation close to the target (photo 11). The second firefighter coming up can chase kinks if needed and will have the thermal imaging camera or other needed equipment. With as little as six feet of free space in front of the bumper, the hoselines can be deployed in any direction—even to the rear of the apparatus. 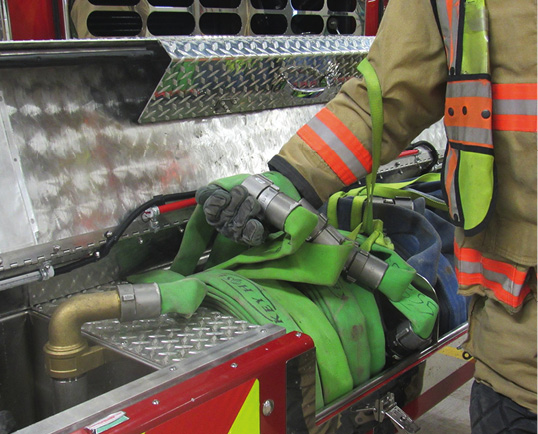 7 The loop of webbing is connected to the nozzle and the 50-foot coupling. This goes on the arm first and ensures that the firefighter has at least 50 feet of workable line with the nozzle. Once the arm is through the webbing, the two coupling loops are held and the rolls are pulled out. 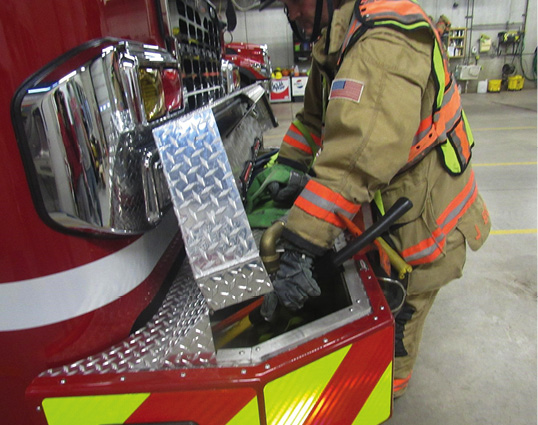 8 The free hand can grab either the irons or the piercing nozzle. 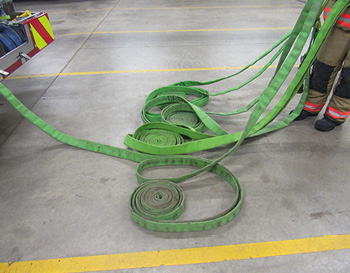 Another design of the front bumper was a tube to which a hose winder can be mounted. Now, a single firefighter can roll up the hose without bending over (photo 12). Once rolled, all four rolls are placed in the bumper (photo 13). Effectively, one single firefighter can practice the deployment and repacking of this hose load without any trouble. It is important to orient all rolls so when pulled, the rolls will roll up and over the lip. After all four rolls are placed (or eight rolls if both lines were pulled), then the couplings are connected. The 50-foot coupler from the nozzle is looped using a girth hitch of webbing to the nozzle (photo 14). The hose roller is then stowed in the bumper cover.

A hose reel with 150 feet of 1½-inch Reel-Tek hose is next to the pump panel and can be charged with pulling some or none of the hose off of the reel (photo 15). The Blitzfire has a pocket with 200 feet of 2½-inch preconnected. This pocket also has room for the 50-foot coupler to be stored with the Blitzfire (photo 16). Just like the handlines, a firefighter can deploy the Blitzfire and have 50 feet of hose ready to work with. If 200 feet are not long enough for the stretch needed, the apparatus has 400 feet of 3-inch ready to deploy and add to the stretch. 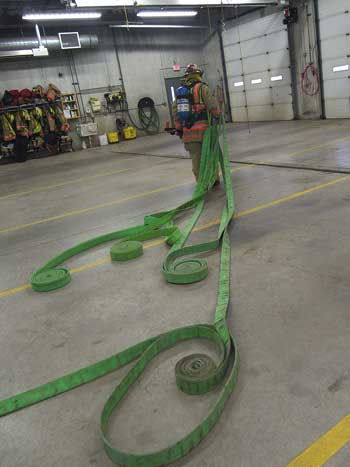 10 The hose uncoils as it unrolls on the ground, allowing the firefighter to walk in any direction after the initial pulling of the coils out of the bumper. 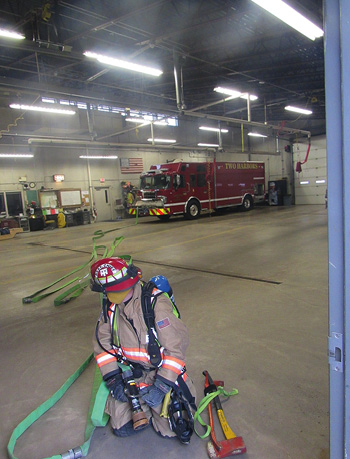 11 All hose is laid out in loops, and the firefighter has the 50-foot coupler with the nozzle; when deployed, there are few kinks left to chase. 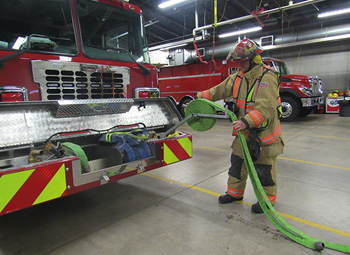 12 The hose roller was adapted from C & S Supply and allows one firefighter to roll up the hose without bending over. He can deploy the line and repack it solo in very little time and with little effort. 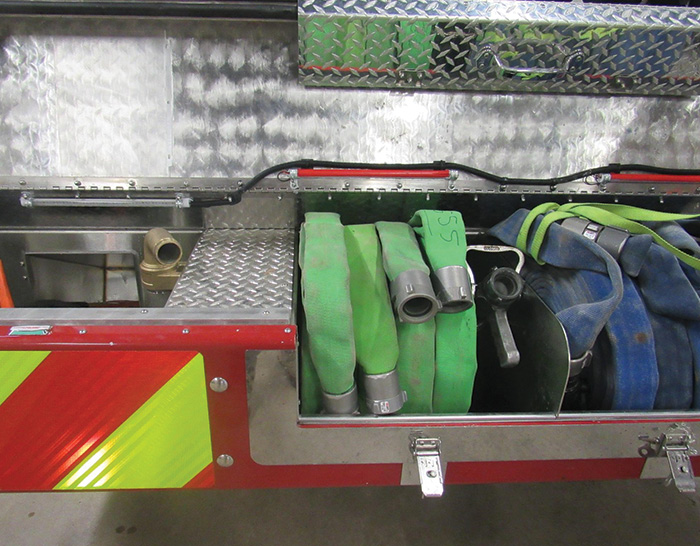 13 Four rolls placed in the bumper before couplings are connected. 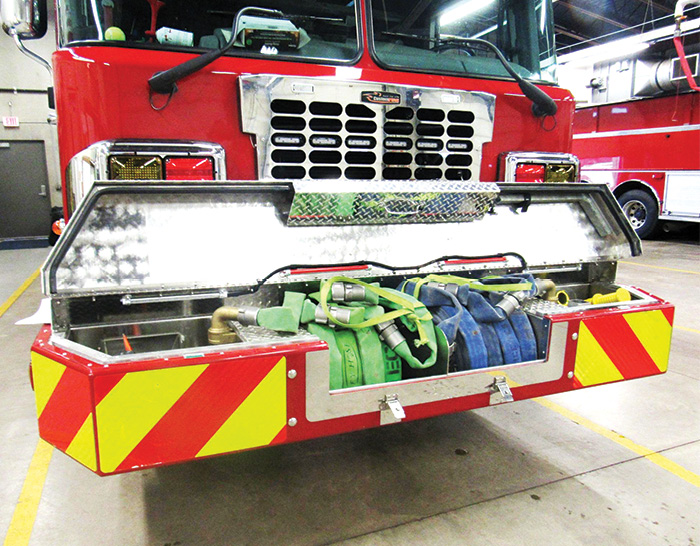 14 All hoses are connected, with a loop of webbing used to keep the 50-foot coupling with the nozzle, ready to be deployed. 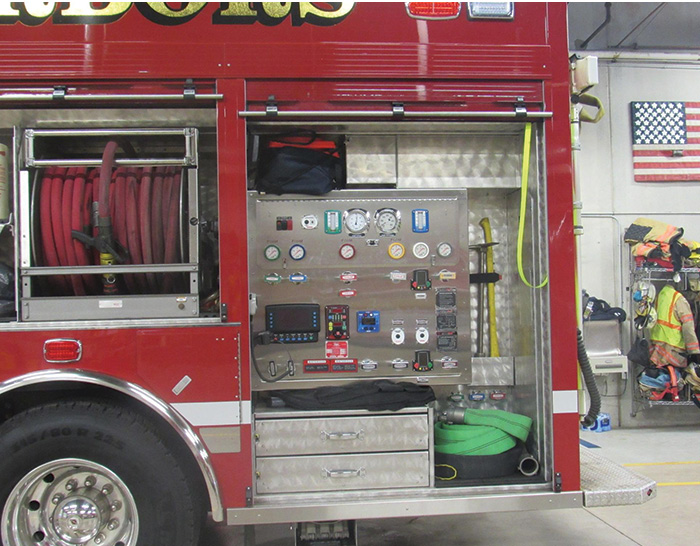 15 Having 150 feet of 1½-inch Reel-Tek hose has increased the capability of the booster line. 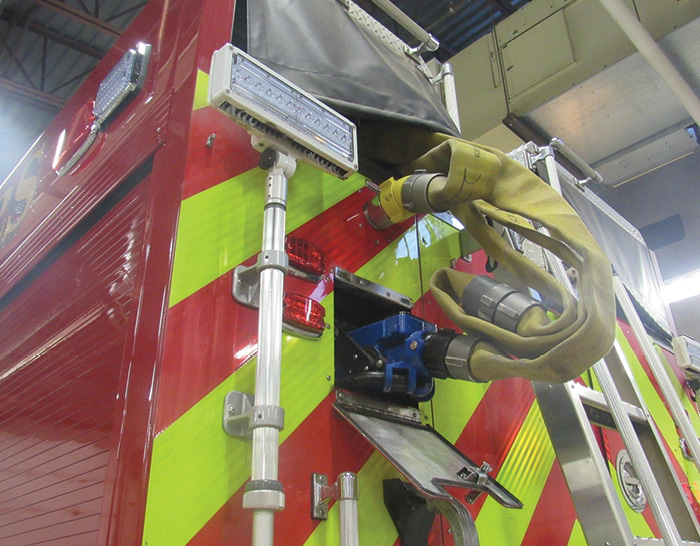 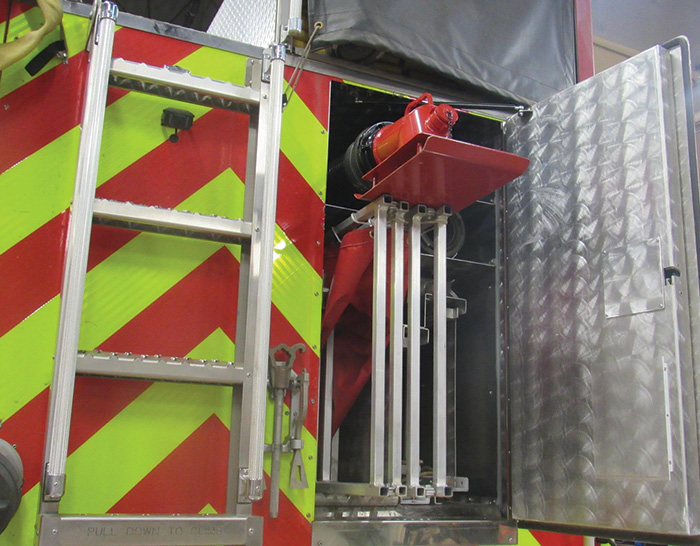 17 The drop tank has a roller that allows one firefighter to pull it out, and the hard suction has the low-level strainer already attached. 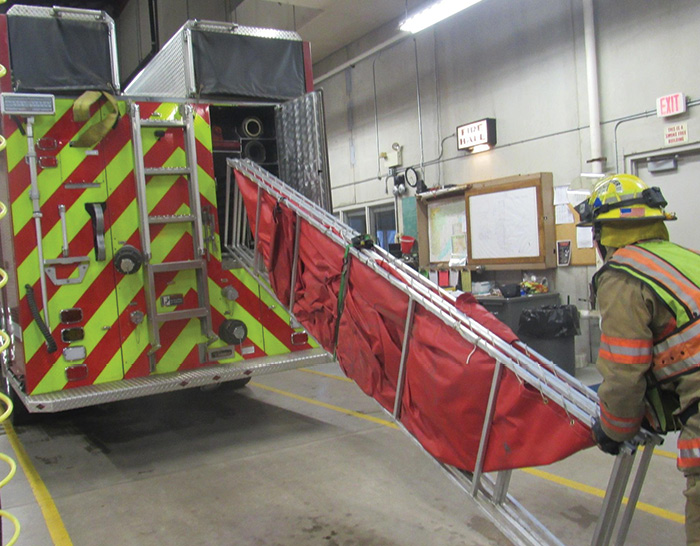 18 The firefighter sets one end down, and it stays upright while he walks back to the truck to set down the other end. 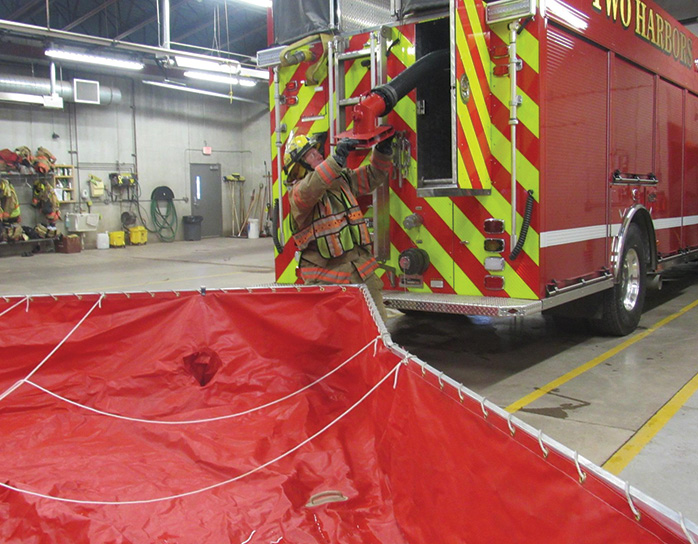 19 The suction foot is preattached to the hard suction. As it is pulled from its pocket, it ends up in the drop tank with the other end ready to attach to the rear intake with a preprime, making drop tank operations a one-person job. 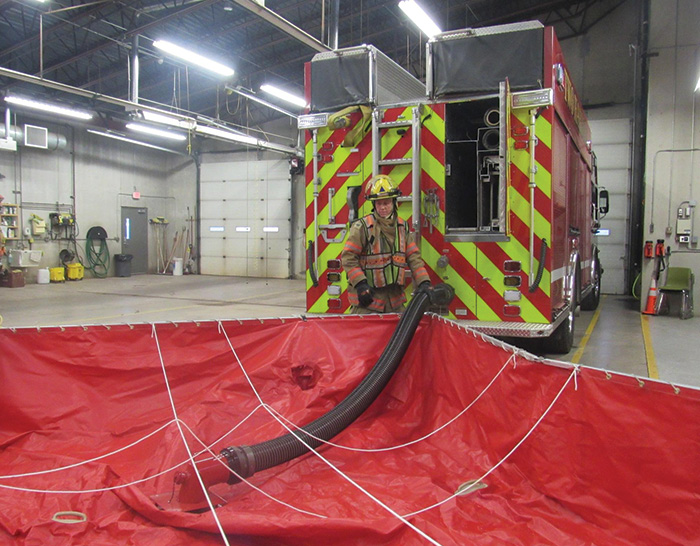 The preprime on the apparatus allows the operator to seamlessly transition from booster tank water to drafting from the drop tank. Now, with a 1,500-gallon booster tank and a 3,000-gallon drop tank, it is possible to have 4,500 gallons of water ready to flow within minutes. The second tender for the apparatus is another 3, 000 gallons, bringing the initial amount of water on scene to 7,500 gallons. Big fire needs big water, and with the Blitzfire capable of flowing 500 gallons per minute (gpm) and both handlines with 200-plus-gpm nozzles, the department has the capability to initially flow big water in the rural areas just like it can in hydranted areas. The apparatus also carries 600 feet of 5-imch LDH for hydrant and relay operations, with each tender also carrying up to 1,000 feet of LDH.

The apparatus replacement was a long process, and the committee spent a lot of time experimenting with ideas and testing theories. This experimenting and testing gave the committee confidence that the features could be functional and gave the push to have the apparatus built with the features. There are a lot of great ideas in the fire service, and departments are always looking for ways to get things done safer and more efficiently. Kudos to CustomFire for working on this project; there were certainly times that the requests of the department pushed the “custom” part of the CustomFire name!

Mark Schlangen began his fire service career in 1998 in Forada, Minnesota. In 2002, he moved to the Two Harbors Fire Department and has been chief since 2006. He is also a high school science and engineering instructor.