The Prospect Heights Fire Protection District is a longtime customer of Alexis Fire Equipment Company, so when the district needed to replace an engine, it was able to again turn to Alexis to build a new rescue-pumper.

Drew Smith, chief of Prospect Heights, says the district held a prebid conference that was attended by six apparatus vendors.

“Once we got our specs prepared, we sent a Request for Proposal (RFP) to a dozen fire apparatus manufacturers,” Smith says. “The Alexis proposal was completely responsive to our RFP with no exceptions, so we chose to go with Alexis.”

Smith points out that the district’s coverage area is the city of Prospect Heights, along with some adjacent unincorporated areas of Cook County.

“The town is sort of dumbbell shaped, with a double set of railroad tracks dividing the community, as well as an expressway bisecting the city,” he says. “Structures are mostly single-family residences, both older and newer, on one side of town, where there are no hydrants, with three-story and four-story apartment housing and commercial buildings on the other side, along with a busy general aviation airport.”

Service area: provides fire protection, rescue, and advanced life support emergency medical services to the six square miles of the city of Prospect Heights and some unincorporated areas of Cook County with a population of approximately 17,000 residents. 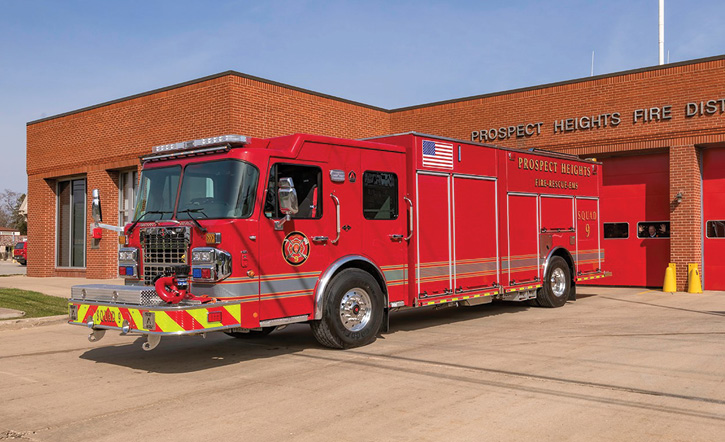 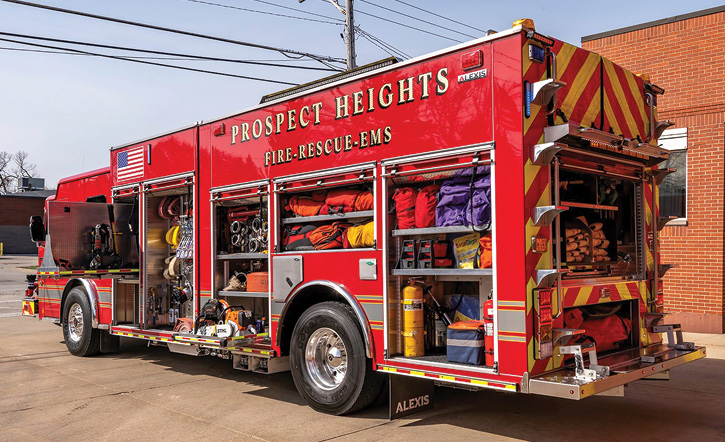 2 The rescue-pumper has a Waterous CXVC20 1,500-gpm pump, a 750-gallon polypropylene water tank, and 60-gallon and 10-gallon foam tanks. Note the slide-out vertical board forward of the pump panel to hold SCBA packs, turnout gear, and hand tools. 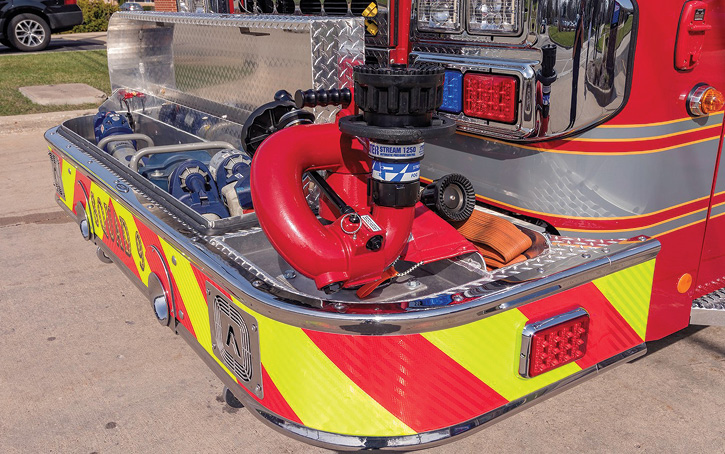 3 The extended front bumper has a tray holding 100 feet of 1¾-inch hose, a Hurst Jaws of Life eDraulic cutter and spreader, and a Task Force Tips EF1 remote control monitor.

Jeff Morris, president of Alexis, says Prospect Heights decided on a clean cab concept rescue-pumper on a Spartan Metro Star SMFD chassis and cab with a 10-inch raised roof and seating for four firefighters in nonself-contained breathing apparatus (SCBA) seats. He notes the rescue-pumper has a heavy-duty stainless-steel body and subframe and is powered by a Cummins 450-horsepower (hp) L9 engine and an Allison 3000 EVS automatic transmission. Wheelbase on the rescue-pumper is 227 inches, overall length is 36 feet 2 inches, and overall height is 11 feet 2 inches.

Smith adds that Prospect Heights only wanted emergency medical service storage in the cab, with the SCBA and firefighter turnout gear stored in a separate 36-inch-wide compartment behind the cab.

“The cabinet is covered by roll-up doors and is accessible from both sides of the vehicle,” he says. “Each side has a four-foot-long, double-sided, slide-out tool board that holds two SCBA, two sets of turnout gear, and hand tools like axes and halligan bars.”

In specing the rescue-pumper, Smith says that Prospect Heights required an extended front bumper with a tray that holds 100-feet of 1¾-inch preconnected hose, a Hurst Jaws of Life eDraulic cutter and spreader, and a Task Force Tips EF1 remote control monitor. 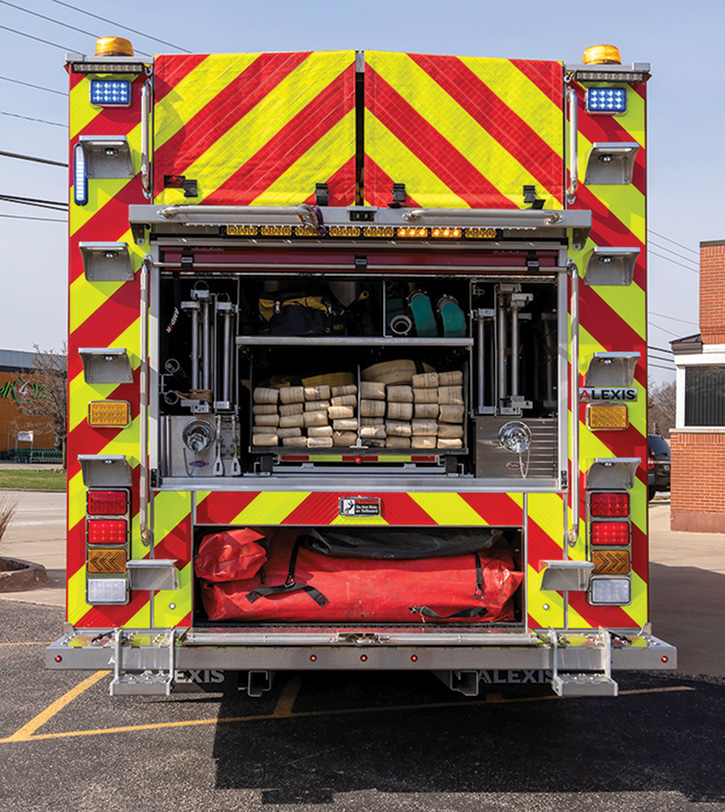 5 The rescue-pumper is powered by a 450-hp Cummins L9 engine and an Allison 3000 EVS automatic transmission.

“There’s a big compartment at the rear of the rescue-pumper that holds an inflatable 14-foot rescue boat, which is filled from SCBA bottles,” Morris says, “and the top of the compartment holds rope rescue equipment, hazardous materials booms, and absorbent.”

Regarding the two foam tanks, Smith points out that the district’s earlier rescue-pumper also had dual foam tanks.

“We kept Class A foam in both tanks. But with our new rescue-pumper, we keep the 60-gallon B tank filled with AFFF foam to use for fighting fires and use the 10-gallon A tank for training, using biodegradable dishwashing soap in it.”

Smith says that Prospect Heights also wanted a low hosebed on the vehicle, so Alexis designed the rig with the hosebed floor at chest height. “Our attack hose is on a pullout tray, 4 feet wide and 7 feet deep,” he says, “holding 400 feet of 2½-inch hose in two beds and 100 feet of 1¾-inch hose in another bed. The main hosebed carries 1,500 feet of 5-inch large-diameter hose and 200 feet of 3-inch hose preconnected to a TFT Blitzfire monitor.”

Besides the preconnects at the rear, the Prospect Heights rescue-pumper carries three crosslays at the pump panel—two 200-foot 1¾-inch hose crosslays and one 200-foot 2½-inch crosslay. In addition, the rescue-pumper has two 6-inch suction intakes with Waterous Monarch intake valves, one on each side; one 2½-inch gated suction on the left side; one 2½-inch tank fill on the right side; and four 2½-inch discharges, two on the left side and two at the rear.

“We also have running board hose wells, one on each side, that hold a section of three-inch supply lines like what we using for nursing tanker operations,” he says.

Morris adds that the rig has two triple SCBA air bottle storage compartments (one on each side), a Whelen LED warning light package, HiViz FireTech LED scene lights on all four sides, and a Whelen LED Traffic Advisor arrow stick.