At Akron Brass Company, the biggest update to remote control monitors is with its remote control unit. “We are launching a new wireless remote control for our monitors right now,” says Jason Riggenbach, product manager for Akron Brass. “We’ve doubled the features; previously, you could move left or right, up or down, fog or straight stream, and have one auxiliary function. Now, we have all those standard features, plus you can stow and deploy the monitor, oscillate it, activate the discharge valve on the monitor, control two monitors at once, see where the monitor is pointed horizontally and vertically, see how far the valve is open, and adjust the brightness of the LED buttons and status indicators.” 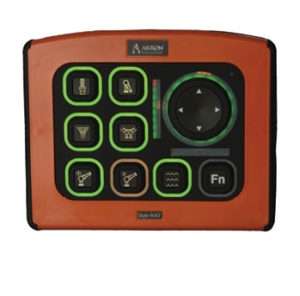 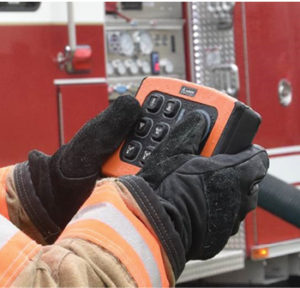 Keith Chard, OEM product manager for Elkhart Brass Manufacturing Co. Inc., says Elkhart Brass has been producing its EXM line of remote control monitors for more than 10 years and the EXM2 series in the past couple of years. “When it was time for an update on the electronic controls, we recently released the next generation of controller for the EXM2 line,” Chard points out. “Some of the new features include dedicated stow and deploy buttons, as well as a dedicated oscillation button. These are in addition to the typical left, right, up, down, fog, and straight stream control buttons.”

Each of the EXM2 series monitors—the Sidewinder EXM2, Cobra EXM2, Scorpion EXM2, SkyStream EXM2, and Magnum EXM2—has its own dedicated controller, Chard adds. The Sidewinder EXM2 flow rate is to 500 gpm, the Cobra EXM2 goes up to 1,500 gpm and is used mainly on pumpers as a deck gun or on the tips of aerial ladders and platforms, and the Scorpion EXM2 flows from 2,000 to 2,500 gpm. For the industrial monitors, the SkyStream EXM2 flows up to 3,000 gpm and the Magnum EXM2 flows up to 5,000 gpm. 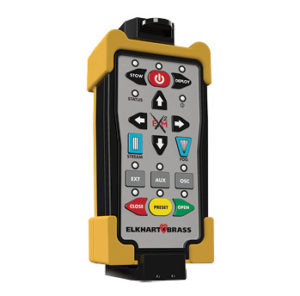 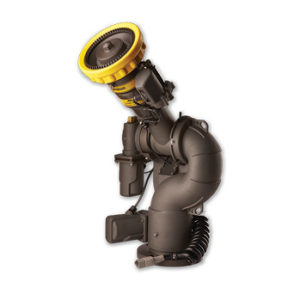 4 The Elkhart Brass Cobra EXM2 remote control monitor is often used as a deck gun on a pumper or at the tip of an aerial ladder or platform.

Brian Podsiadlik, municipal firefighting channel manager for Task Force Tips (TFT), says all of TFT’s remote control monitors can have panel mount controllers, handheld wireless controllers, or remote controllers tethered to the vehicle with 30 feet of cable. “Our Monsoon remote control monitor flows up to 2,000 gpm and has a design that minimizes turbulence to provide maximum flow at the least amount of pressure,” Podsiadlik points out. “The Monsoon’s waterway has no sharp 90° bend, so it minimizes turbulence and friction loss. The Monsoon is a popular monitor for use at the tip of aerial ladders and platforms and on top of pumpers.”

TFT’s newest remote control monitor is the Tsunami, Podsiadlik notes, which allows flows up to 8,000 gpm. “It’s often mounted on the top of industrial pumpers and also on portable firefighting trailers. We also have the capability of setting up our electronic monitors in a facility where they can be connected to the facility’s Ethernet, allowing the monitors to be controlled from a central control room like you might find in a steel mill, refinery, or chemical plant.” 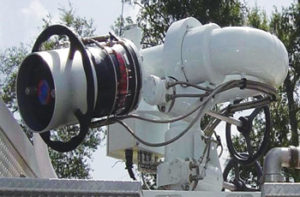 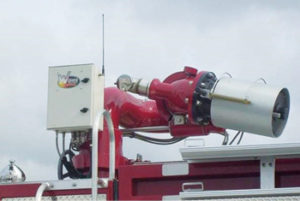 6 The Williams Fire Ambassador remote control monitor flows from 2,000 to 8,000 gpm through its 8-inch waterway. 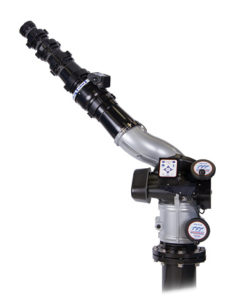 7 The newest Task Force Tips remote control monitor is the Tsunami, which allows for flows up to 8,000 gpm, shown here with a set of stacked tips. (Photos 7-8 courtesy of Task Force Tips.) 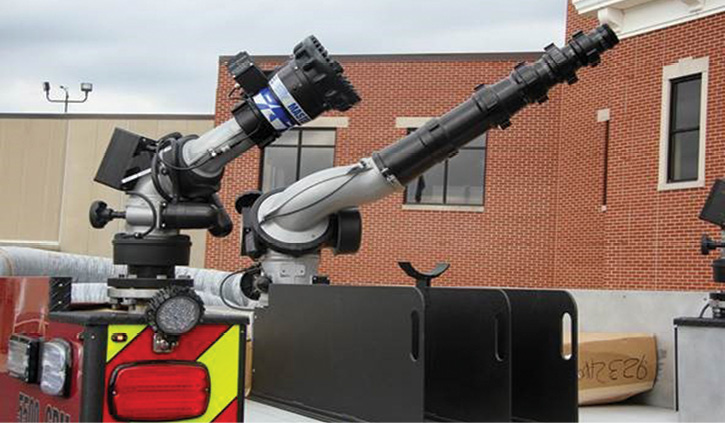 TFT also makes the Blitzfire monitor that flows from 175 to 500 gpm, which can mechanically be remote controlled to oscillate. “Once it’s set, the monitor will oscillate freely with 40° total sweep,” Podsiadlik says. “It’s often used in that way in municipal departments to protect an exposure and in industrial situations to cool or mitigate a hazard like a propane or an anhydrous ammonia tank.”

Morgan notes that all of William Fire’s mobile remote control monitors are both hard wired to a control panel and also operable through a wireless remote. “The monitors have a programmable oscillation capability for automatic operations,” he says, “and can be overridden with a matched HydroFoam™ nozzle operated remotely through use of a joystick and switches on a consolidated control panel that allows foam concentrate and dry chemical to be introduced into the water stream, thus increasing the reach of those products.”