The Miami-Dade (FL) Fire Rescue Department wanted to replace its 2010 heavy rescue truck with a technical rescue vehicle that included many improvements and changes in equipment storage to make the rig more responsive to the various technical rescue disciplines it would need to handle.

Alex Gomez, a Miami-Dade firefighter assigned to the heavy rescue, designated Squad 69, and a member of the truck replacement committee, says the department has had a tactical rescue truck in service since 2001 and as each rig was replaced, the size of the tactical rescue went from a smaller vehicle to larger and much larger. Gomez notes that Miami-Dade has 2,500 firefighters operating out of 70 stations, with dual companies in most stations housing an engine and either a ladder or platform, as well as an ambulance, which Miami-Dade designates a rescue.

“The 2010 Rosenbauer heavy rescue truck we have is set up for all types of rescue, but for trench rescue or structural collapse calls, we also have a box truck in a station north of us with all of that equipment,” Gomez points out. “We also have four pumpers and ladders that have some technical rescue equipment on them to allow them to get started on a rescue while Squad 69 is responding and sometimes our collapse truck too.”

Gomez says Miami-Dade’s committee researched various technical rescue trucks around the country, and he and his lieutenant traveled to see the Orlando (FL) Fire Department’s technical rescue truck. “They have a truck built on a Sutphen chassis and cab with a body built by SVI Trucks,” Gomez says, “and we were very impressed by the way it was set up and the features it has. When we got back to our station, we researched other trucks SVI has built for departments around the country and then contacted our dealer about them.”

David Stonitsch, owner of South Florida Emergency Vehicles, says Miami-Dade has been its customer for about seven years, having purchased seven Sutphen 70-foot aerial platforms and three Sutphen 100-foot mid-mount aerial platforms. “They also bought a Sutphen pumper from us for their airport and came to us with a list of equipment they wanted to carry on their technical rescue truck,” Stonitsch says. “So, we worked with Dwayne Woodard at SVI, who has a heavy rescue background, to develop the specs for the Miami-Dade truck.”

Stonitsch notes that Miami-Dade took a lot of ideas from the Orlando technical rescue truck but went with a stainless-steel body because they plan on keeping the vehicle in service for twice as long as they would for a typical engine.

Service area: The department provides fire protection, rescue, and advanced life support emergency medical services to a 1,883-square-mile district that includes the unincorporated parts of Miami-Dade County plus 30 municipalities located within the county with a population of 2.7 million.

“The Miami-Dade firefighters measured the equipment they wanted on the truck and gave that information to the SVI engineers to design the spaces in the various compartments,” Stonitsch says. “The equipment was placed in compartments with them in the preconstruction meeting, so we knew it would fit in the area they wanted when the vehicle was built.”

Woodard, the regional sales manager for SVI, says the technical rescue truck SVI built for Miami-Dade is on a Sutphen Monarch chassis and 73-inch 4-door cab with a 20-inch raised roof, with seating for six firefighters. The officer, two rear-facing firefighters, and two forward-facing firefighters are in H.O. Bostrom Durawear Plus™ SCBA (self-contained breathing apparatus) seats, he notes. “There’s an EMS (emergency medical services) equipment storage area in the crew cab and a walk-in interior compartment behind the crew cab that holds bench seating with scuba tank brackets for the dive team,” Woodard says.

The SVI technical rescue truck has a wheelbase of 264 inches, an overall length of 42 feet 7 inches, and an overall height of 12 feet and is powered by a 500-horsepower (hp) Cummins X12 diesel engine and an Allison Gen 5 4000 EVS automatic transmission. The rig carries an Onan Protec 25kW PTO (power takeoff) generator system; a Command Light CL series light tower with six FRC Spectra LED light heads, two of which rotate 180 degree to provide back lighting; and six HiViz Guardian Elite LED scene lights, two on each side and two at the rear of the vehicle. 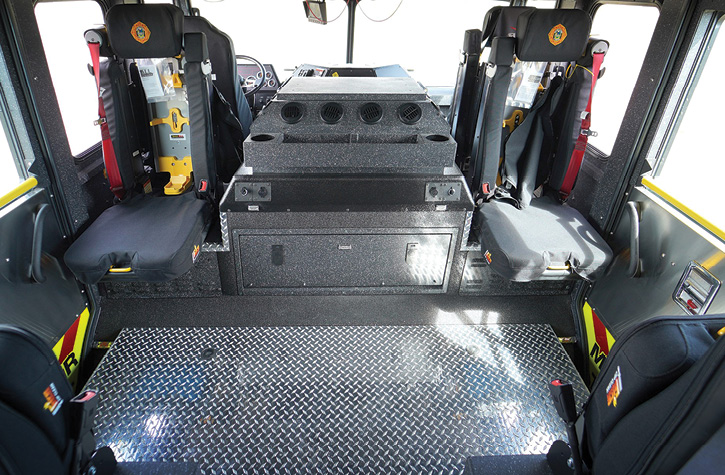 2 This crew cab view from the recessed compartment at the cab’s rear that holds bench seating and scuba tank brackets for the department’s dive team shows the crew’s H.O. Bostrom Durawear Plus SCBA seats and the EMS cabinet storage space. 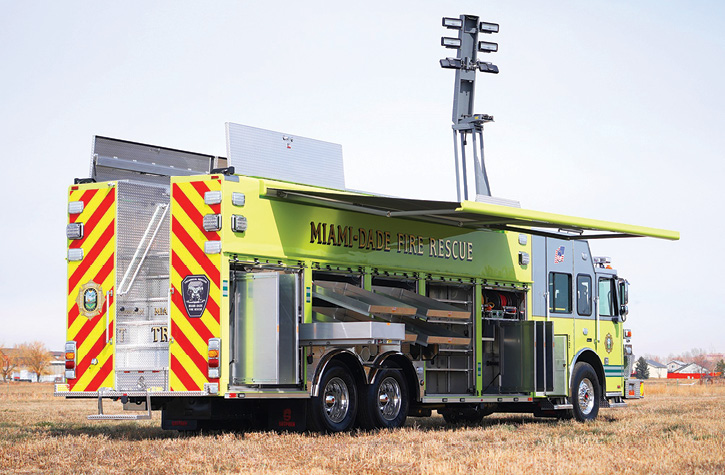 Gomez notes that the SVI technical rescue truck is fitted with high point anchors for rope rescue work and receivers for a portable winch on all four sides of the vehicle. Dive gear, rope rescue equipment, and cameras are stowed in the walk-in compartment off the crew cab; Paratech struts are in the R1 compartment; the L2 compartment holds air bags; and there’s a transverse slide in the L5 compartment that holds cribbing.

Gomez points out the new SVI technical rescue truck is stationed with the department’s Heavy 1, a 2017 60-ton Rotator tow truck built on a Kenworth T80 chassis and cab with a Jerri Dan rear, carrying a 50-ton boom and a 50-ton underlift. “A four-firefighter unit staffs both the squad and the rotator,” Gomez observes. “When the squad was delivered and put in service, it got all good reviews from the firefighters using it, so we’re very happy with the new rig.”