What’s up with the tips of aerial ladders and platforms? A variety of different fixtures and equipment.

Monitors and nozzles, of course, plus valves, discharges, breathing air, stokes basket and rope rigging fixtures, cameras, and various types of lighting can be found up there, vying for space at the tip and on the front and sides of platforms.

Jenny Bloemer, senior manager of business development for aerial products at Pierce Manufacturing Inc., says Pierce has seen a trend toward departments requesting more equipment at the tips of ladders and around platforms. “Many departments want more lighting out there and are asking for more DC- and fewer AC-powered lights. Whelen’s Mini Pioneer LEDs are popular, as are LEDs made by HiViz and also FRC.” 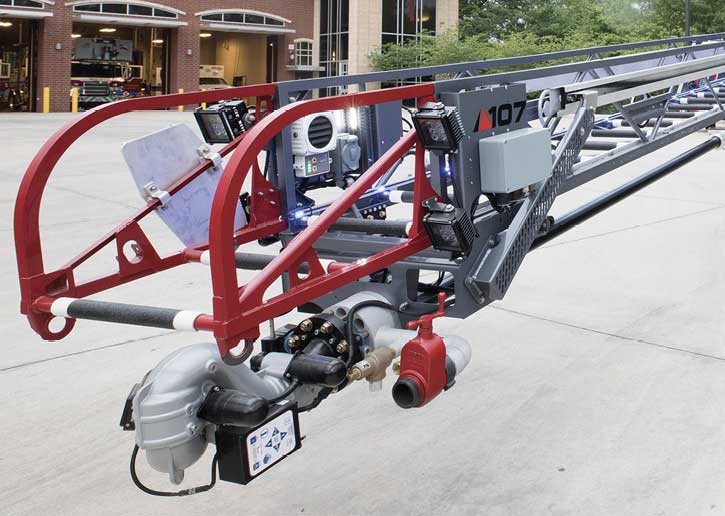 Bloemer notes that other equipment at ladder tips includes locator beacons to allow the tip to be spotted in smoky conditions; remote controls at the tip; and cameras, both digital video and, less frequently, thermal imagining on both ladder tips and on platforms. “We’re also putting on stokes basket brackets and parapet ladder fixtures on platforms and are seeing more waterway outlets being requested.”

Joe Hedges, product manager for chassis and aerials at E-ONE, points out that fire departments continue to want to carry a lot of equipment on their platforms since the bucket functions as an elevated workstation. “We have a stokes basket receiver that can be installed in three positions, on the left or right side or across the front of the platform over the top of the handrails,” Hedges says. “We also have a rope rigging and rappelling package with solid anchors at the back of the bucket. For rope work, we have lifting eyes on each side at the back of the platform and corresponding eyes at the tip of the base.” 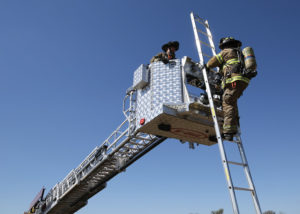 A parapet ladder bracket is mounted at the front center of this E-ONE aerial to allow pinning a 12-, 14-, or 16-foot roof ladder. (Photo 2 courtesy of E-ONE.)

Hedges adds that a parapet ladder bracket can be mounted at the center front of a platform to allow pinning a 12-, 14-, or 16-foot roof ladder. “It’s a floating design bracket that allows the ladder to pivot if the platform is pulled back,” he observes. “Camera options we’ve recently installed on ladder tips and platforms include a ProVision fixed lens camera, a Safety Vision digital video camera, and a FLIR pan/tilt/zoom camera.”

Paul Christiansen, aerial sales manager for Ferrara Fire Apparatus, says, “Traditionally, the equipment at the ladder tip and on platforms includes a couple of LED lights, an ax or a hook, and lately temporary storage for a chain saw.” Christiansen notes that Ferrara also has a stokes mount and rope rescue bracket that is installed on platforms and a roof ladder bracket as a separate accessory. “We also have a pulley system for rope rescue that attaches at the tip of a ladder and a separate fixture that attaches at the base section of the aerial,” he says.

Brandon Whittaker, aerial sales manager for Rosenbauer, says equipment on Rosenbauer’s ladder tips and platforms is customized to the needs of the fire department. “We are seeing chain saw mountings both inside and outside platforms and on the side of the fly of a ladder,” Whittaker says. “We also are installing digital video and thermal imaging cameras at the tip that are viewable on display screens in the bucket or at the pedestal, which can be tied into a DVR recording system on the chassis.” 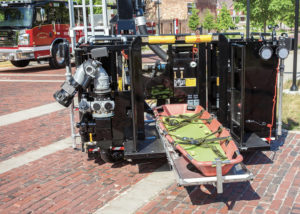 This Rosenbauer platform is fitted with a stokes basket mounting, LED lighting, a remote-control monitor, and storage areas inside the bucket. (Photo 3 courtesy of Rosenbauer.)

Other ladder tip and platform equipment Rosenbauer installs includes 12-volt and 120-volt LED lighting, Whittaker points out, a variety of storage box options, preconnect discharges, parapet ladder fixtures, and multiple high- and low-angle rope rescue anchor points. “On our T-Rex aerial, we have a spring-loaded front deck on the platform that can pivot 48 degrees each way,” he says, “and it can be fitted with a stokes basket bracket and diving ladders for water rescue.”

Justin Howell, senior sales territory manager for Sutphen Corp., says standard equipment items on Sutphen’s platforms include a built-in parapet ladder that’s controlled from the bucket, stowable stokes arms at the front of the platform, four tie-off points inside the bucket and two outside, a 2½-inch standpipe connection, and storage for axes and hose donut rolls. “We usually put three surface-mounted LED lights at the bottom of the platform, one on the face and one in each corner,” he adds, “and have installed both digital video and thermal imaging cameras at the tip.”

Randy Hummer, aerial account manager for Spartan ER, says that departments are requesting the highest-performance LED lighting in the smallest housing possible at the ladder tip. “We are putting on higher-output lights in 12-volt and 110-volt options and work closely with the customer and suppliers to find the most powerful light in the smallest housing possible so it doesn’t impede the maneuverability or operation of the aerial,” Hummer notes. “In terms of cameras, we’ve installed basic digital video cameras with color screens at the tip, sometimes in wireless, and also thermal imaging cameras and a couple of times a 360-degree camera on a platform.”

Aerial ladder tip controls are becoming more popular, Hummer says, to allow better positioning of the aerial ladder from the tip. “All our models have a clean tip, with a bolt-on ladder egress of 18 to 20 inches in length, which we keep clear of all the add-ons,” he says. “On the Smeal platform design, the parapet ladder fixture is in the front center of the bucket, while on the ladder tower platform it can be either at the left or right rear corner of the platform. Inside the platform, we have sleeves and holders for forcible entry tools and axes and compartments for small tools, breathing air masks, and small hose donuts.”

Pete Hoherchak, product manager for KME, says that typical equipment at the tip and along the sides of a ladder fly include an ax and pike pole and that more departments are opting for a scabbard for a chain saw up there. “We’re starting to see more camera systems at the tips, mostly digital video but occasionally thermal imaging,” Hoherchak says. “Some vendors have wireless cameras that are handy because they we don’t have to run hard wiring through the ladder.” 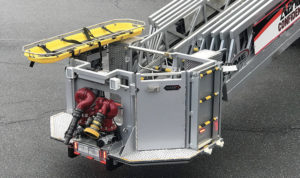 This KME platform has a stokes basket bracket on the right side, drop-down parapet ladders on each side and at the front, two monitors, 2½-inch discharges, and a pair of LED scene lights.(Photo 4 courtesy of KME.) 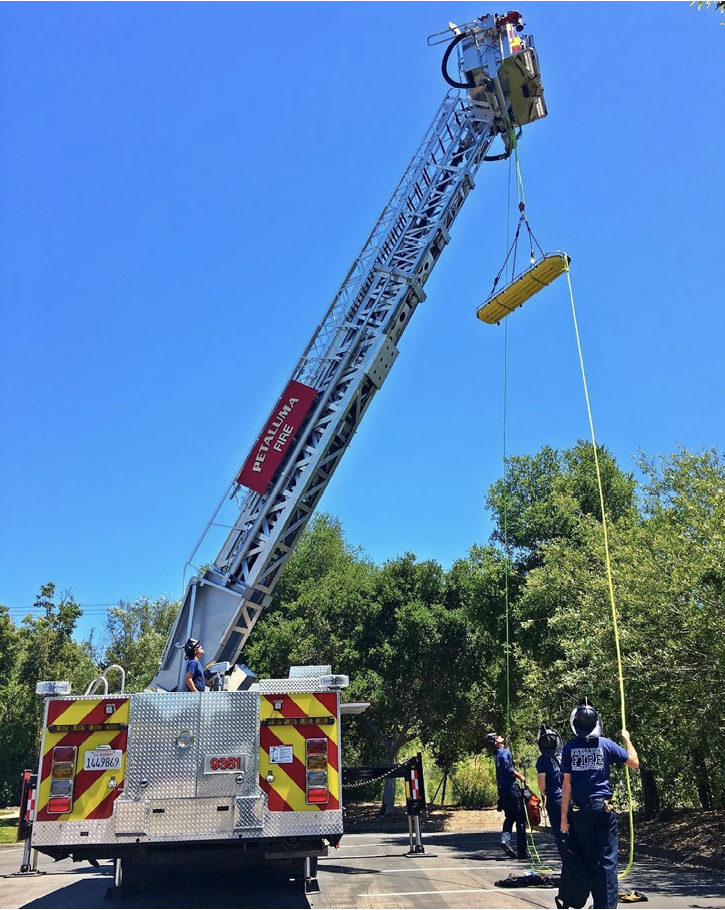 Hoherchak points out that KME’s new midmount platform has an integral parapet ladder built into each side. “They have 14-inch rung spacing, and you pull a pin and the 3½-foot ladder drops down,” he says. “On our other platforms, we have provisions for a longer parapet ladder, and a stokes bracket can be mounted on either the left or right of the platform. Also, the joystick control in the bucket can be positioned in three different locations: left, right, or center front.”

All the manufacturers of aerial ladders and platforms offer the option of either one or two monitors on platforms and typically one monitor on a ladder tip in either manual or remote-control versions. The most popular brands installed are Task Force Tips, Akron Brass, and Elkhart brass monitors and nozzles.