When it came time to replace Fire Station 7, the city turned to KZF Design, which had worked with the city on the master plan and the other station designs, and SFCS Architects to design and build the new facility.

David Hoback, chief of Roanoke Fire-EMS, says Station 7, located in the historic Grandin Commercial District, was built in 1922. The city considered remodeling the station but found it could not be converted into a 21st century fire station. “That neighborhood has a lot of unique character to it,” Hoback says. “It’s a very popular area, and the station was well located to protect the community. So, we closed a road, bought an acre of land, and tore down old Station 7 to allow enough space to build a new one.”

Scott Csendes, director of public facilities for KZF Design, says the design of new Station 7 “incorporates overall massing, roof design, and masonry details that emulate the former station and reinforces its location as an anchor to the historic district.”

Csendes notes the new station has a lot of detailing in its design that evokes the old building, like bricks from the old Station 7 used in the new version, large wooden barn doors made from wooden lockers and put on sliders in the pantry area, old wooden pike poles set up as pot hangers in the kitchen, installation of the old fire pole in the new Station 7, and an entertainment center in the day room that is built from the front of an old fire engine and hung on the wall.

Brenda Landes, principal at SFCS, points out the old Station 7 “had completely outlived its usefulness to the fire department because the apparatus didn’t fit in it anymore. They couldn’t get an aerial ladder in there. And we knew it was going to be controversial to replace the station.” 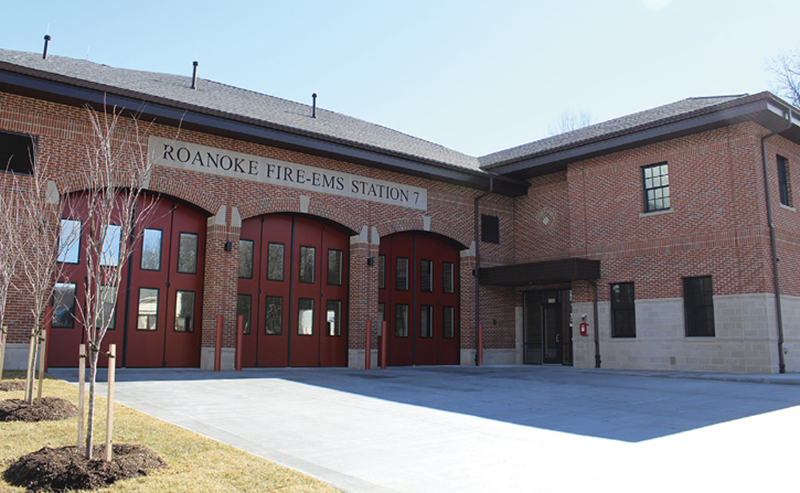 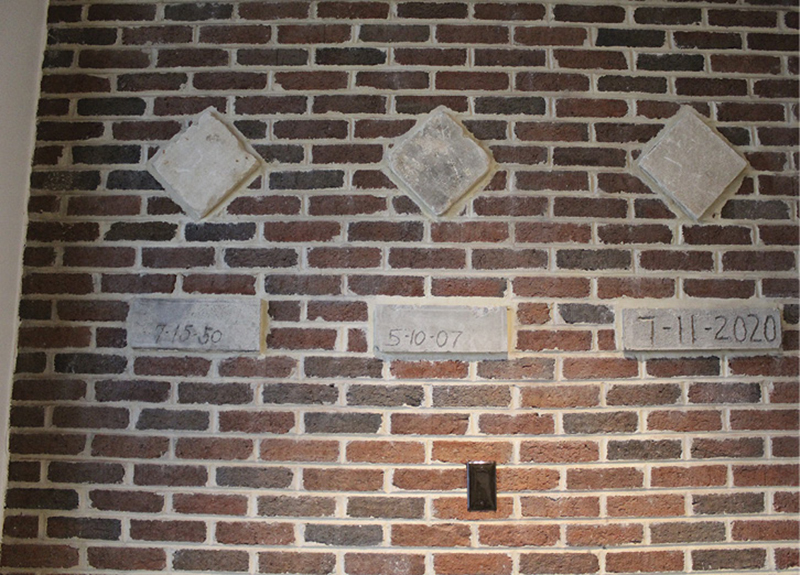 2 The new Station 7 incorporates design elements and bricks taken from the original 1922 station that sat in a historic district. 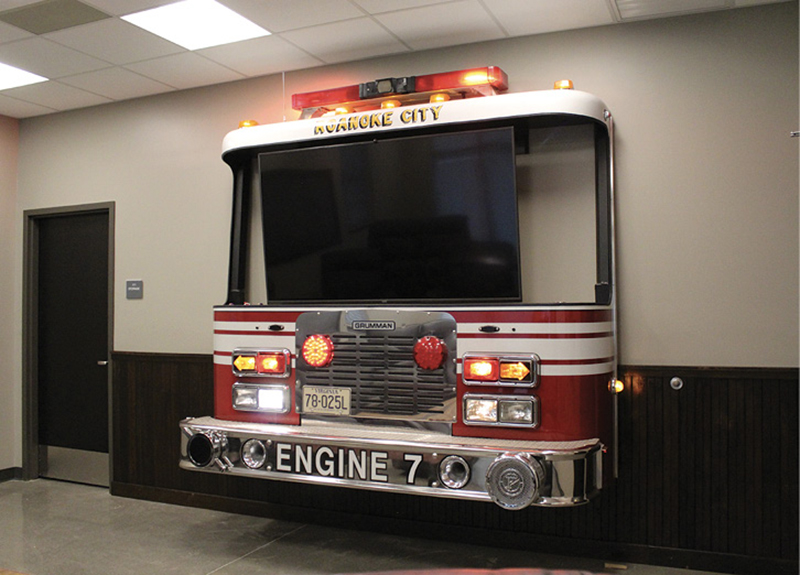 3 The day room of the new station incorporates a flat screen monitor in the windshield of one of Station 7’s old fire engines. 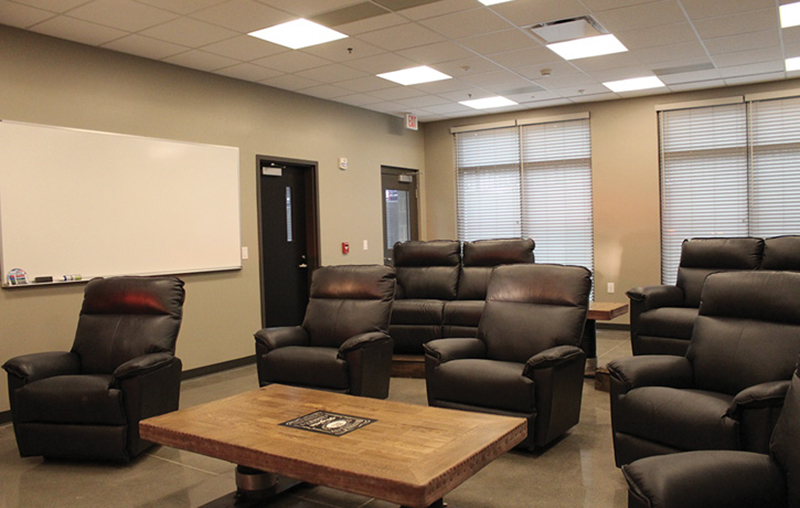 4 Station 7’s day room can double as a training room. 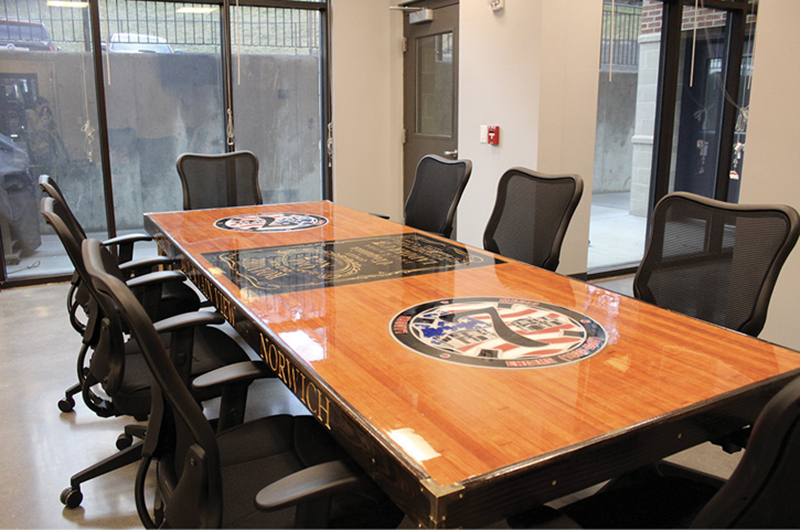 5 The dining area in the new Station 7.

Landes says after determining it would be impossible to incorporate the existing old station into a new design, they developed a design of a new station that provided the functionality of a modern fire station, at a cost impact that the community would accept.

“We presented all of our findings at a public meeting,” Landes says. “People didn’t realize how out of date the old station was and how difficult it would be to plan around the existing footprint. In addition, there is a lot of topographical elevation in the area and on that site, making ingress and egress difficult. We laid out the facts for the members of the community, so they had a better understanding of the issues, and got a buy-in from the community, especially because they understood that was the best site for the fire department for that response area. And we were sure to tell the community that we would be incorporating some pieces of the old station into the new one.”

The new two-story Station 7 covers 16,000 square feet and includes three double-deep, drive-through apparatus bays with an adjacent turnout gear room, a workroom, a turnout gear extractor and dryer room, and a shower room/locker area for gross decon where firefighters can change into clean clothes before moving into the cold zone of the station.

Csendes points out that KZF had to get creative with the positioning of the new station because the site is so tight. “We modified the layout of the apparatus bays so they parallel the main road,” he says, “which allowed us to get the three double-deep, drive-through bays, along with front and back aprons. The bay exit doors are bifold doors that open and close faster, while the rear apparatus bay doors are overhead doors. In front, the bay doors are almost all glass to allow people to see inside the station, which gives a welcoming feel to the place.” 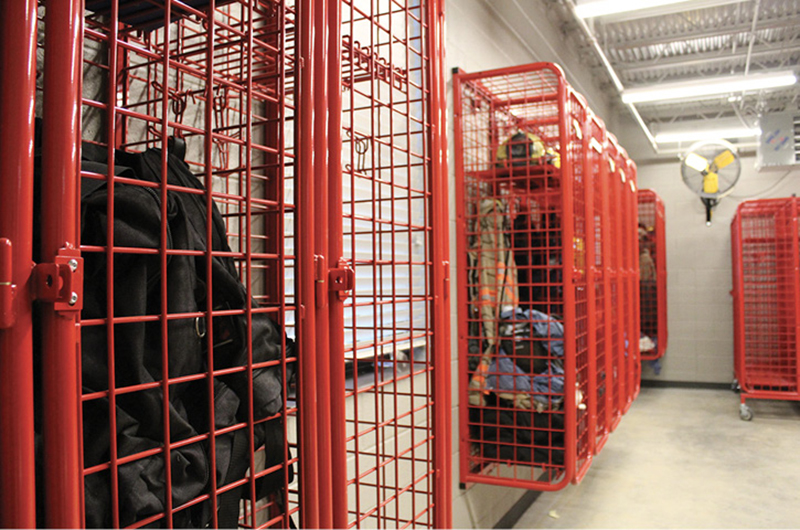 6 The turnout gear room off the apparatus bays has its own ventilation and exhaust system to remove off-gassing contaminants from turnout gear. 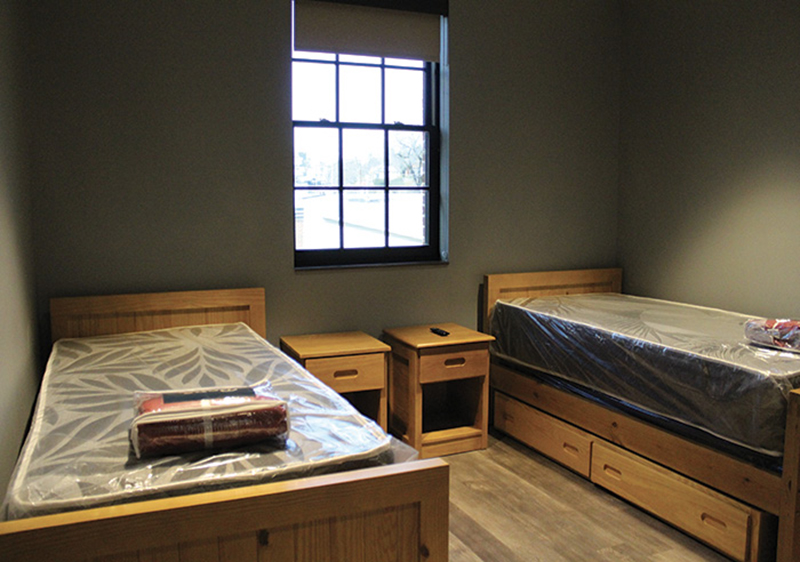 7 Nine individual dorms on the second floor of new Station 7 each hold three bunks to cover all three shifts, while the 10th dorm is a single designated for the captain. 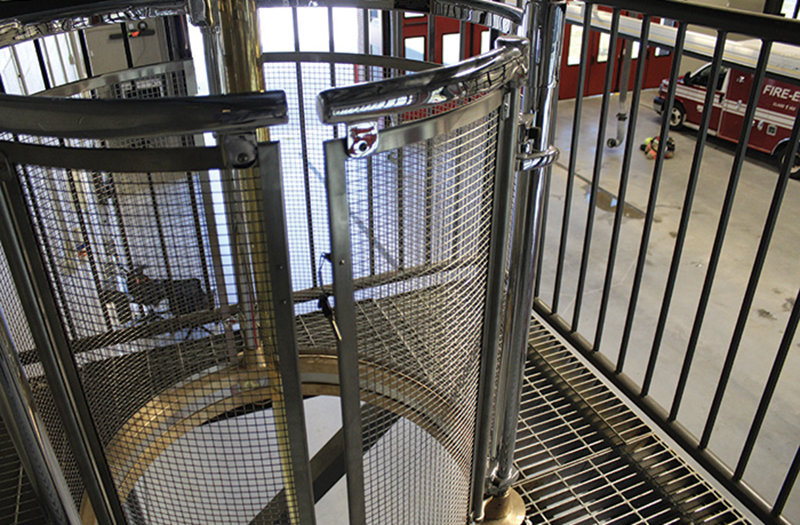 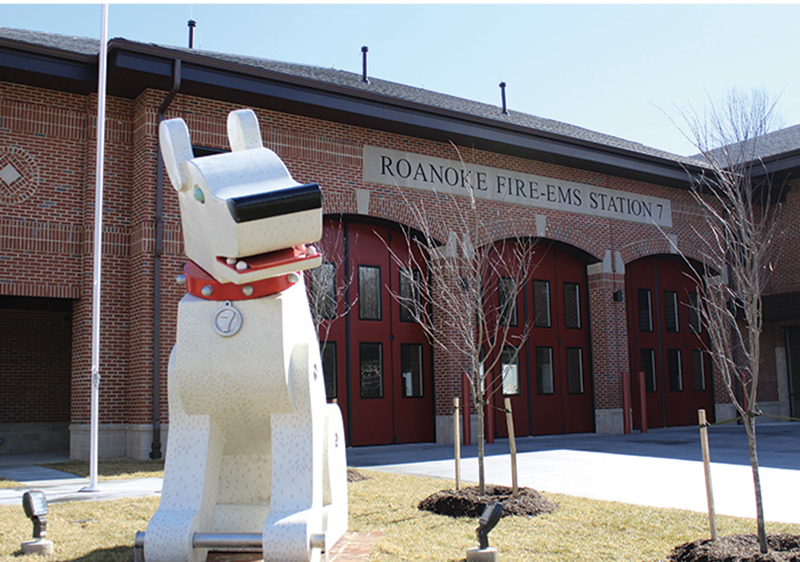 9 Roanoke’s wood and stucco dog, a city art project called the Trojan dog, sits on pavers from the old station in front of the new facility. 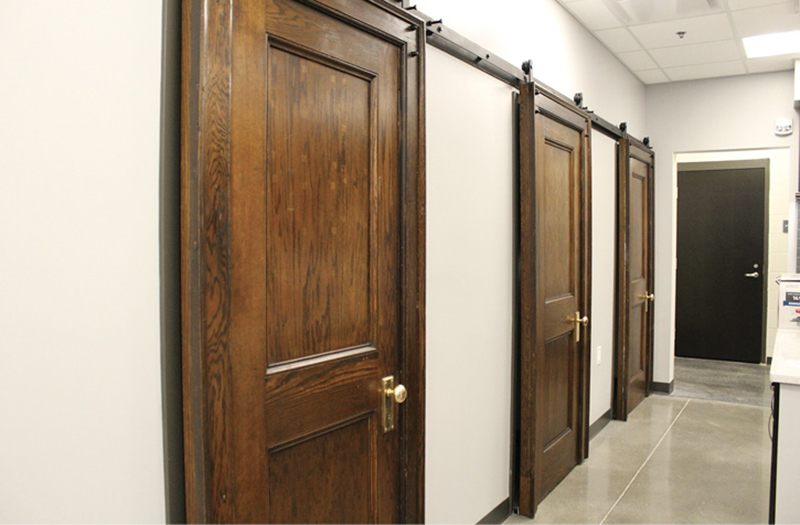 10  Wood panels from the old station were fashioned into sliding barn doors to cover the station’s three pantries.

Also located on the first floor are a large kitchen and dining area with access to an outdoor patio; a three-bay pantry; and a day room that doubles as a training room, also with access to a patio. “To help with firefighter health and well-being, we built in a lot of natural light sources for the kitchen, dining, and day room areas,” Csendes notes. Other rooms on the ground floor include a lobby/triage area, a toilet room, a captain’s office, a fitness room, a radio/alarm room, two storage rooms, and an electrical/mechanical room.

Csendes points out, “A lot of time and effort went into the mechanical systems on the station so the units are separated from the hot, warm, and cold zones so they are pressurizing the building in a manner that keeps the various zones balanced and not impinging on each other. There is positive pressure in the living and administrative quarters, the turnout gear room has negative pressure ventilation, and the apparatus bays have exhaust systems that attach to the apparatus.”

Hoback says the front of Station 7 features a large wood and stucco dog art object, known locally as the Trojan dog. “The dog is a feature of the city’s art program and came to us around 2008. When we demolished the old station, the dog went to the library for the duration of the build out and then was returned to us. The dog now sits on pavers taken from old Station 7.”