The importance of scene lighting has never been lost on Steve Tinberg. Forget the fact that Tinberg is a regional sales manager representing two lighting manufacturers, Command Light and Federal Signal.

And while he knows his products, he knows tragedy even more. Tinberg buried his son more than 20 years ago because of one dark night in 1999. Decades later, he’s still trying to change the mindset of departments that all too often leave their crews in the dark.

Tinberg’s son, David, a Texas firefighter with a Firefighter 5 certification, was working a structure fire of an in-progress residential remodel when he was directed to the rear of the house. Little did the crew know—largely because of inadequate lighting—that someone had used a backhoe to dig a 6-foot hole near the septic system. David, 33, who was wearing self-contained breathing apparatus, fell into the hole and onto the air cylinder, crushing two of his lower vertebrae. For the next year and a half, David switched gears, selling fire equipment while doctors pumped him with a combination of steroids and anti-depressants—a combination that should have never been prescribed together.

In the end, David, a gracious “Yes sir, no sir” kind of guy, took his own life.

“I often wonder if the outcome would have been different that night had the engine been equipped with more light,” Tinberg says. “I know from my own fire service years, we always struggled with poor lighting. Back then, it was because it was halogen, but now, lighting has gotten so expensive, and so it’s the first thing departments cut when it comes time to spec an apparatus. But the moment departments do that, they remove a safety margin, which is a shame because if you figure the cost of your lights or a tower averaged over the life of a truck, say 20 years, that price is nothing. David was a son, a husband, and a father, and now he’s gone, and all at the expense of inadequate lighting.”

And in that dark moment, David also became a statistic. Year after year, national and international administrations publish annual firefighter fatality reports, and there’s hardly a year that goes by that inadequate scene lighting doesn’t play a role in many of these irreversible events.

1 Steve Tinberg, who is a sales manager for Command Light and Federal Signal, has been advocating for more emergency incident scene lighting since his son, David, was badly hurt at a house fire more than 20 years ago. (Photos courtesy of Command Light.) 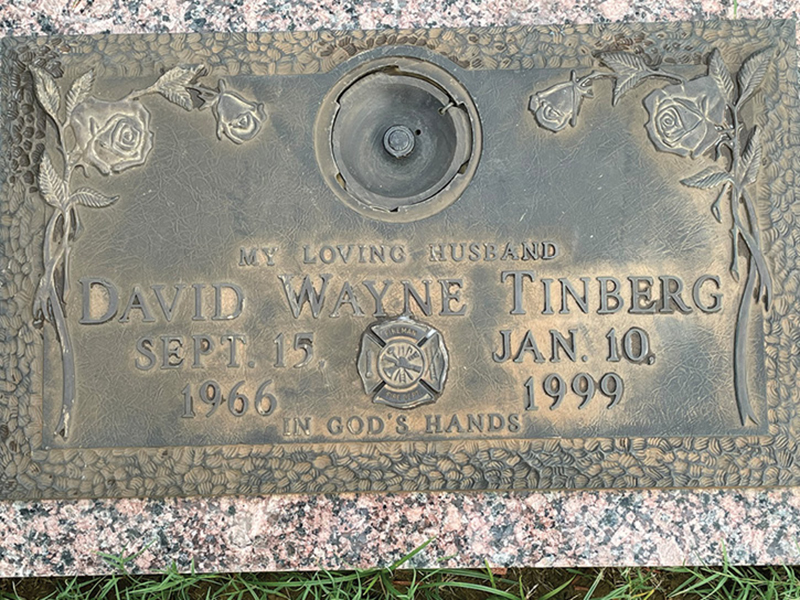 2 The headstone for David Tinberg, who took his life after suffering a debilitating injury at a house fire in 1999, serves as a reminder about the need for more emergency scene lighting.

One of the most recent reports, published in October 2020 by the U.S. Fire Administration, reported the death of a firefighter killed when he encountered electrical lines. “Rain, darkness, and an absence of lighting in the area were cited as factors in the incident.”

In another incident, a captain’s vehicle was struck while responding to the report of trapped victims in a submerged car. He died of blunt force chest trauma injuries. The report notes, “Visibility was limited due to light conditions.” Another vehicle struck a firefighter on scene, crushing his body before dragging it a short distance. “Factors contributing to the incident were darkness … and the driver of the vehicle was blinded by apparatus emergency lights.”

As such, an International Fire Safety Journal Special Report delves into the importance of scene lighting while looking at the evolution of LEDs. While this technology has helped the industry progress in many ways, these bright lights have diluted some of the most important best-practice lighting principles, introducing a new set of lighting issues that pose a risk to firefighting crews.

“With all these new, bright LEDs, departments think they have all the light they need on the side of the truck, but truck-mounted light only illuminates a small area. Departments really need to get their lights up in the air,” Tinberg explains. “In fact, I’ve always debated with departments because they’re eager to put light towers on a rescue or an air/light truck, but often, they forget about their engine. Why aren’t they putting these valuable lights on the very truck that is first to the scene, positioned right in front of the structure? David rode on a fire engine, one with inadequate lights.”

Amy Speer, a journalism veteran and former Rocky Mountain News editor, has worked with more than a dozen of the top fire and emergency brands over the past five years. She is now the marketing director for Super Vacuum Manufacturing and its seven divisions, including Command Light, an industry leader in elevated scene lighting for more than 50 years.