For those of you who have followed my columns for the past 20-plus years, you know that I have mainly concentrated on new deliveries of fire apparatus around the country.

I thought this month I would take a break from that routine and concentrate on a truly unique apparatus that served the Hamden (CT) Fire Department.

During the 1940s and ’50s, there were many known and unknown small fire apparatus builders around the United States. One of those was Woods Engineering Services located in Topsfield, Massachusetts. Woods built a combination of various types of fire trucks on commercial chassis—Diamond T, International, and others mainly for fire departments in Connecticut, Massachusetts, and other New England states as well. 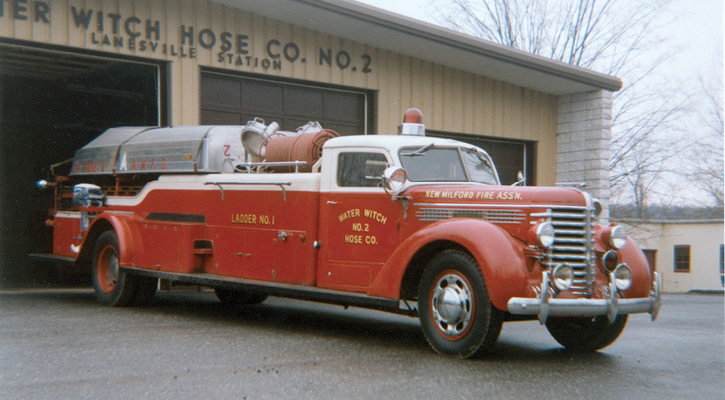 2 This truck, sold to the New Milford Fire Department, boasts an addition to the body. 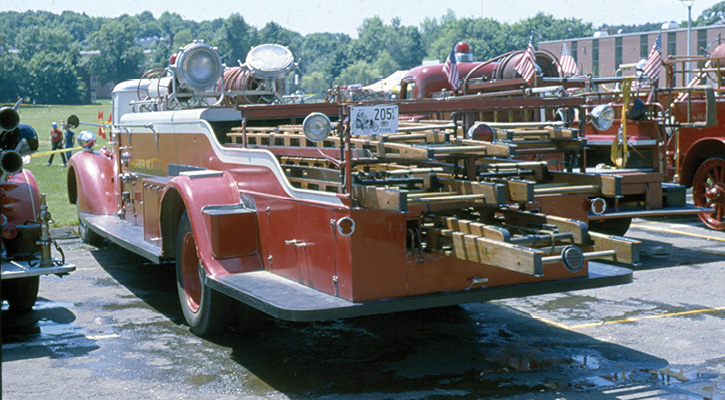 Although it didn’t carry the National Fire Protection Association requirement for ground ladders of today, it provided a community that couldn’t afford a ladder truck a means to get equipment and ladders to a fire scene.

Here’s a little background about the Hamden Fire Department. It was created in 1896 as a volunteer fire department covering 33 square miles, along with seven other volunteer companies that joined later. In 1918, the department hired paid drivers. After that, 20 paid full-time firefighters were hired. In the 1980s, the roster climbed to 125. Today, the department has 100 members.

According to Dave Johnson, a retired paid firefighter from Hamden and current secretary of the Hamden Fire Retirees Association, he first saw the apparatus at a parade as a kid living in the area. “I always thought that this truck was fascinating with its two-tone ivory and red paint job and extra-long wheelbase,” he says. “The vehicle was manufactured and delivered to the Hamden Fire Department after Pearl Harbor in February 1942. The department paid $7,500 for it. It replaced a 1926 Maxim city service ladder truck that was hit by a trolley car and destroyed.”

Johnson says the truck was fitted with a 150-gallon-per-minute (gpm) pump, a booster tank, and a reel and put in service in April 1942 at Highwood Station #1. “It was not easy to drive,” he says. “It had a narrow cab, and it was very tight. You really couldn’t drive it with boots and turnout gear on. Maneuverability was not great as well. You really had to take it slow going into a turn.” When the Highwood Station closed, the truck was moved to the newly renovated Humphrey Station and served along a 1942 Diamond T 600-gpm pumper and a 1938 Seagrave Canopy cab 600-gpm pumper.

Its life didn’t end at that time. It was purchased once again by the late Ken Lewis, a member of Company 8 and an avid collector of fire apparatus. In the summer of 1986, the 1941 Diamond T ladder truck made one final appearance in Hamden. It was at a career-volunteer fire muster held on the grounds at Quinnipiac University for the Hamden towns’ bicentennial celebration. That June, I had the privilege of driving the truck to this muster, which was a life-long dream of mine. I was the youngest (most recently born) living member of the fire department to drive it. Everything that the old-timers stated about driving the truck was true. It was tight inside, and the turning ratio was brutal.”

Flash forward to 2021: A toy company had gotten wind of the vehicle from a firefighter collector and produced a diecast model of the exact vehicle. The history of the Hamden Fire Department and this unique historical fire apparatus will live on for long into the future.

History combined with a uniquely manufactured fire apparatus gave this fire department some notoriety. Think about this when you begin the process of designing your next new piece of apparatus. Think functionality but keeping it within your budget. Don’t design just a parade piece with all the bells and whistles. Plan for future use and how it will fit into your response district and handle target hazards.