Guernsey Tingle Architects and Stewart-Cooper-Newell Architects (SCN) were faced with an interesting conundrum once they won the contract to build a new Fire Station Number 1 for the James City County (VA)-Bruton Volunteer Fire Department and Rescue Squad.

Not only did they have to develop a plan for a fire station that provided for both career and volunteer firefighters, but they also had to do so on a relatively tight site with the then-current 1960s-era station fully functioning. 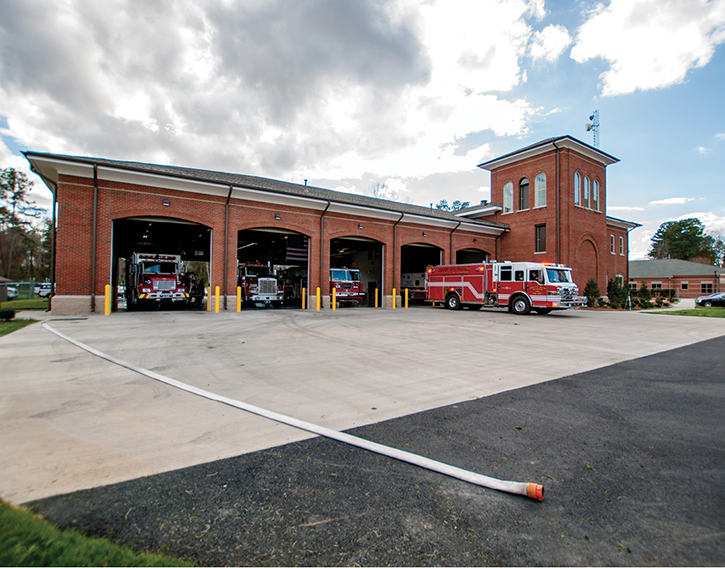 Tom Tingle, president of Guernsey Tingle Architects, says his firm had been brought in by the volunteer fire company in the 1990s to perform renovation and expansion work on the old station, performing building repairs, putting slopes on former flat roofs, and adding bunk rooms for female firefighters.

“In 2012, they hired us to do a property condition evaluation, so we brought in Stewart-Cooper-Newell Architects to do the evaluation, which showed settling on the building, some cracks in the structure, building envelope issues, roofing that needed to be replaced, and spaces too small for how they were being used and too small for expanding into the future,” Tingle points out. Tingle notes the old station was built “saddlebag style,” with the apparatus bays in the center; living quarters on one side; and offices, the kitchen area, and the day room on the other.

Tingle notes that a lot of negotiating took place over an extended time, when the county proffered a basic program of its needs. “The county said it was important to keep the volunteers in the new station and that it was willing to invest in a new station on the existing site that would serve both career and volunteer firefighters,” he says. “One of the caveats of the program was that the county had to keep the existing station fully functioning through the design and construction of the new station because of the wide geographic coverage of that station in a rural part of the county, with a long section of an interstate highway to protect.” 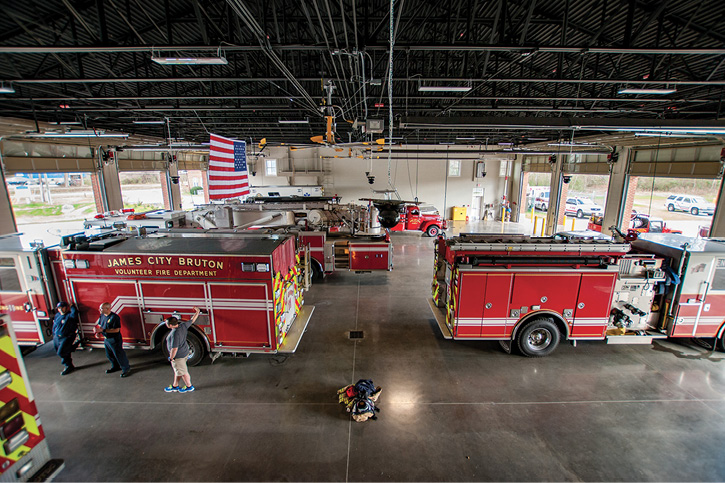 2 Fire Station Number 1’s apparatus bays are designed so that a sixth bay can be added in the future if needed. 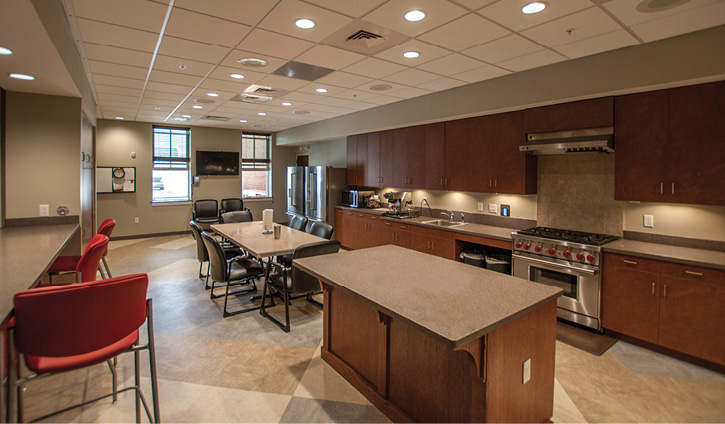 3 The kitchen and dining area in the new station. 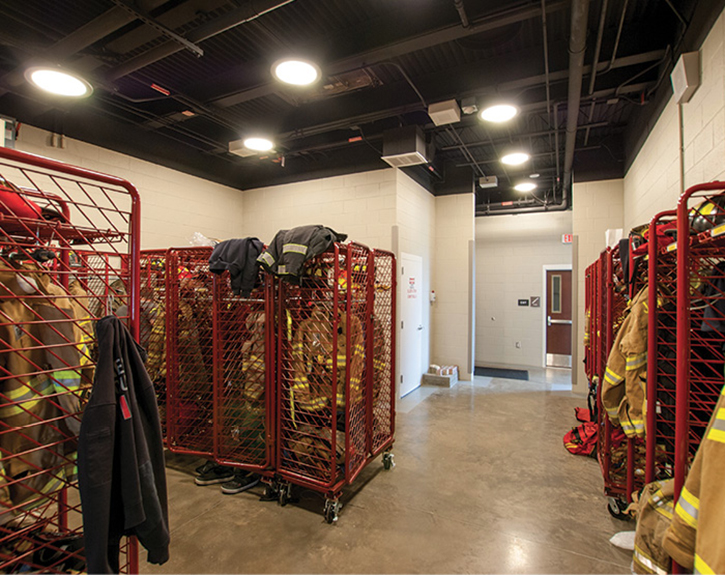 4 A turnout gear room is located at the edge of the first apparatus bay.

Ken Newell, principal at Stewart-Cooper-Newell Architects, says that SCN performed a master plan study for Guernsey Tingle and James City County on what could be done on the site and still keep the existing station in operation during construction. “This is known locally as Taono Station, named after the agricultural community where it was located,” Newell says. “They showed us some old photographs of what was the oldest high school building in the area and wanted the new station to look similar to a historic building. So, in our design of the new station, we picked out elements of the old high school exterior, like the arched windows on the exterior, and worked them into the look and feel of the new station.”

William Apperson, chief of the James City Bruton Volunteer Fire Department, says one of the biggest concerns for his department was how many people could be accommodated at the station at any given time, as the station is a gathering place for the public. “The career fire service has a specific number of firefighters, but our volunteer fire service fluctuates,” Apperson points out. “Currently, we have 65 active firefighters, but adding in life and retired members, we get to around 85 people. Then there has to be provision for the public to use the space as a community room, and we needed a commercial kitchen, so these were some of our concerns.” 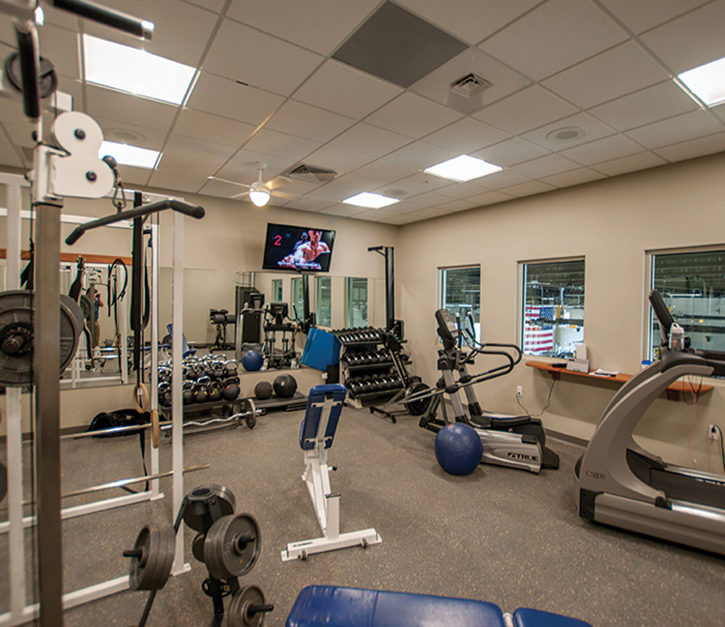 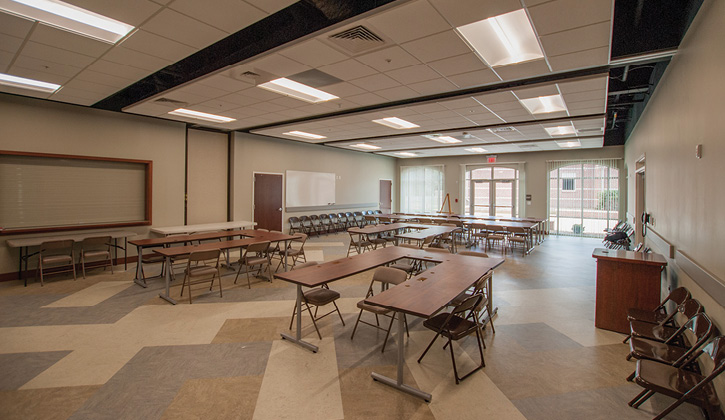 6 A large training room doubles as a community room and has a commercial kitchen adjacent to it. 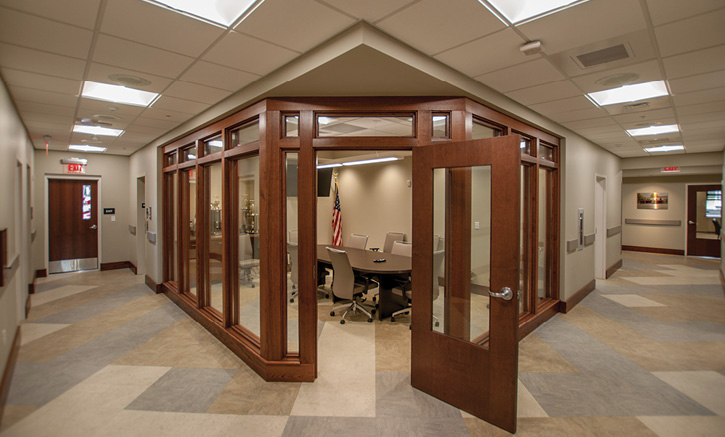 7 A conference room in the station’s secure area. 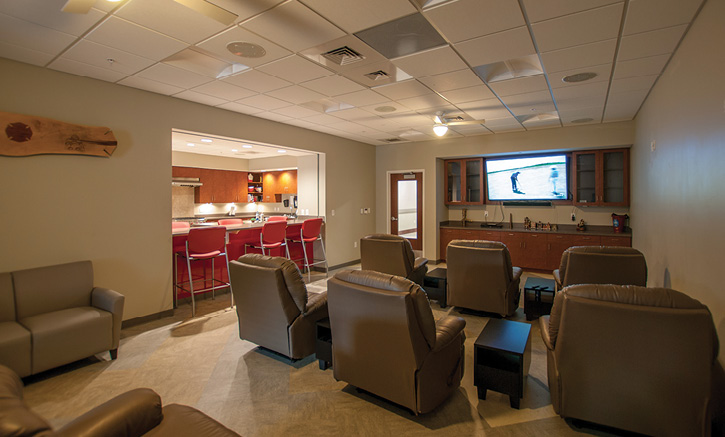 8 The day room used by firefighters.

In the final analysis, everyone’s needs seem to have been met well, observes Tingle. “Because it’s a volunteer station as well as career, the department insisted on a community gathering space, which they got through a very large training room that doubles as a community room,” he says. “There are men’s and women’s restrooms nearby and a commercial kitchen adjacent to the training room. The firematic portions of the station are not accessible to the public.”

Fire Station Number 1 is a two-story building with five double-deep, drive-through apparatus bays, says Newell, set off to the northwest side of the site to allow for the addition of a sixth bay in the future. “Because the original station had to be kept in operation during construction, we built the new station within 10 feet behind the old station, which meant they had to use their old drive-through station as a back-in for the duration,” he points out. “The exterior of the new station is concrete masonry units (CMU) and brick with decorative block around the water table. We also used brick and elements of friezes on the face boards and the arched windows to echo the historic feel of the high school. The roof is an asphalt pitched single roof with a mansard roof over the public spaces.”

Newell notes that the second floor has a male bunk room, which can hold 12 firefighters, while the female bunk room is set up for four firefighters. There are male and female toilet/shower rooms, an exercise room with windows that overlook the apparatus bays, a fire pole, and two stairwells at the north and south sides of the structure.

To the west of the apparatus bays on the ground floor are a radio room, EMS storage, a decon room, and a turnout gear storage and locker room, Newell says. Moving into the green zone, farther to the west are a day room and kitchen, as well as offices for various fire officers. Farthest west in the station, outside the secured area for firefighters, are the large training room, commercial kitchen, and restrooms, areas that are used by both firefighters and the general public when gatherings are held.

Apperson notes that the commercial kitchen in the public area has a walk-in refrigeration unit, deep fryers, and a commercial cooking range. “In case of an emergency, like a hurricane, we can shelter folks in here, feed and house them, and keep them comfortable because we have a station generator that can fully run us for a week,” he says. “We take into account the community in everything we do. We want to safely house our firefighters and the public too. This is a community station; that’s where our heart is.”