The Garden City (NY) Fire Department (GCFD) on Long Island, like most volunteer fire departments across the country, has a rich heritage.

This fire department’s history began in 1899 after several independent fire companies began to form in the village after a devastating fire that started in the Garden City Hotel. Then, in 1920, several residents decided to become more organized and brought those companies together. They became charter members of the Garden City Fire Department and formalized the volunteer fire department that was integrated into the village government. Some 100 years later, the department has developed into a proactive volunteer fire department that responds from three stations and serves a population of 20,000.

“The GCFD tries to replace its apparatus every 25 years unless there is a pressing issue with its operation,” says Third Assistant Chief James Taunton. “We form an apparatus committee that is comprised of a chief, firefighter, and officer so we have all points of view and nobody can complain about the design and specifications after we receive the delivery. This system so far has worked well for us in past apparatus purchases.”

He continues: “Before we went out to bid, we looked at what we wanted to accomplish and several manufacturers. We had a 2007 ladder tower and an engine we really didn’t need, so we decided to downsize. Our committee decided to go with a quint, since we could take all the tools off the older ladder and the engine and combine them on the quint. Our department also had another rear-mount ladder (nonquint) and liked the size and maneuverability. Our response area has a few low bridges, so the operation and size of the rear-mounts worked out well for us.” 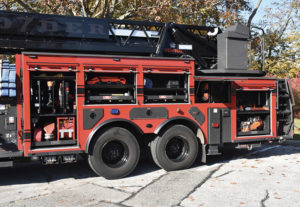 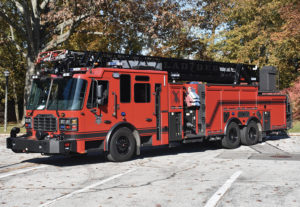 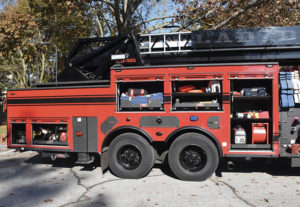 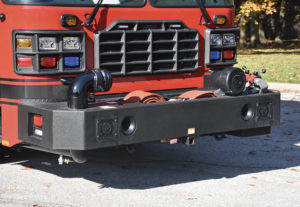 After the bid process, the department went with Ferrara for the purchase. “We just purchased two other Ferrara apparatus last year—another engine and a heavy rescue. Both have served us well, we liked the operation, and our department could begin to standardize using the same manufacturer. The local dealer, Neville, was close by, and we had good experience dealing with them in the past with our other Ferrara apparatus,” Taunton says.

Standard operating procedures would have either an engine or the quint respond first due, and the second ladder would be used for mutual aid and as a spare should the quint be out of service for any reason.

“We also spec’d additional gate valves on the quint for extra connections to hydrants in our district or neighboring towns. Basically, the whole layout of the truck is made so our firefighters can safely dismount and have tools at the ready when they go to work at a fire scene,” Taunton says. “We also designed the truck so it could be somewhat self-sufficient at a fire. It can control and supply itself and not have to worry about relying on an engine to supply it at a fire scene.” 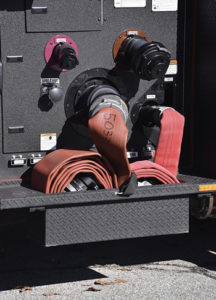 Officer’s side: two intakes—3-inch and 5-inch. 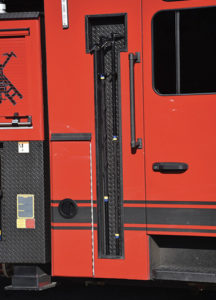 Recessed hooks on both sides of the cab.

“We traveled to the Ferrara factory in Louisiana twice, once for mid build and at the end for final inspection. We were really happy with the operation and it was a great experience all around dealing with the Ferrara engineers and workers on the line,” Taunton concludes.

The GCFD planned well for this third apparatus purchase in two years. The apparatus planning committee designed a highly functional truck that would take the place of an older ladder platform and an additional engine, subsequently downsizing. This is a concept that is catching on all over the country, mainly because of low staffing and needs.

Making the truck self-sufficient so it could respond not only as a truck but also as an engine was a design the apparatus committee wanted to work out. The vehicle has a combined load of truck and engine company tools, auto extrication and battery-powered hand tools, and a large hose load for firefighting operations.

If you are planning for an upcoming apparatus purchase, look at your response district, staffing, target hazards, and so on, and plan accordingly. If you need to downsize, combining the use of several pieces of apparatus into one might be the way to go; only you and your members can decide.