Fairfield County (SC) EMS has had a frontline fleet of Road Rescue ambulances for many years, so when it came time to replace a rig, the department naturally turned to Road Rescue for a new Type 1 ambulance.

“With the COVID-19 pandemic, our ambulance replacement schedule got hampered,” says Daniel Sloan, the deputy director of Fairfield County EMS. “The new ambulance we got from Road Rescue replaces one destroyed by an engine compartment fire that started in the RAM’s exhaust filter and couldn’t be extinguished before the truck burnt down.”

Sloan points out that with this new ambulance, some small changes were made to the Ultramedic design from the department’s previous versions. “All of our ambulances carry hydraulic extrication equipment,” he says, “and we wanted more space for that equipment, so we increased the size of the compartment to hold more, which includes a Hurst Jaws of Life eDRAULIC combi tool and our water rescue equipment. Our supervisor rescue vehicle has a full complement of Hurst eDRAULIC tools. We also added a Whelen Howler™ ultra-low frequency electronic siren to this ambulance to try to better attract the attention of motorists who are buttoned up in their vehicles.” 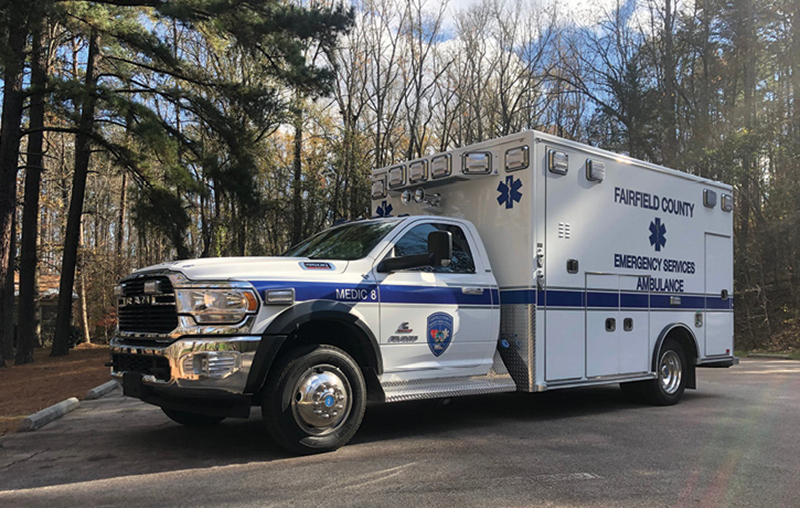 Sloan says that Fairfield County EMS paramedics and EMTs like the safety features of the Road Rescue Ultramedic rigs, such as the Per4Max four-point seat belt harness system on all the patient box seating, the installation of a Stryker Power-LOAD cot fastening system, and the Whelen Howler electronic siren. “We focus a lot on safety in our department and wanted the best safety systems possible in our ambulances,” he says.

Holly Russell, Road Rescue’s outside brand manager, points out that the Fairfield County Type 1 is built on a Dodge RAM 5500 SLT 4×2 chassis with a 168-inch-long Ultramedic patent module fitted with a Crew Guard roll cage design, a WHISPERQUIET™ insulation system, a Broan wall-mounted 1,000-watt thermostatically controlled heater, and a Cool Bar HVAC climate control system. “The ambulance has a LiquidSpring rear suspension, and the patient module is mounted to the chassis using the MaxForce™ mounting system,” she says, “which disperses energy to multiple chassis coupling points in a collision.” 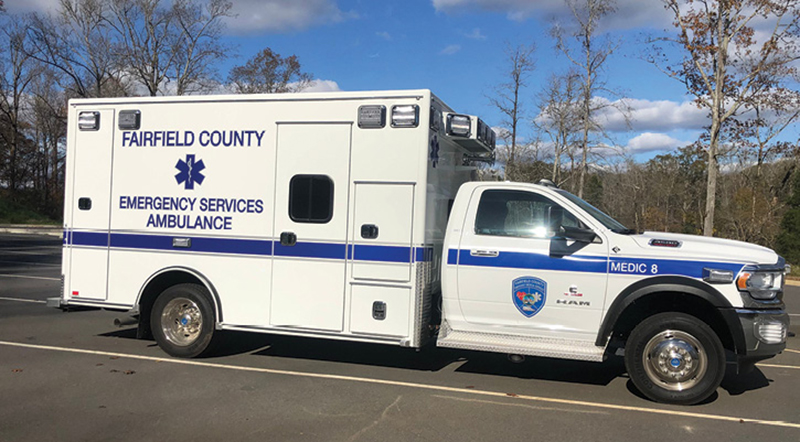 2 The rig has a Liquid Spring rear suspension and the patient module is mounted to the chassis using Road Rescue’s MaxForce™ mounting system. 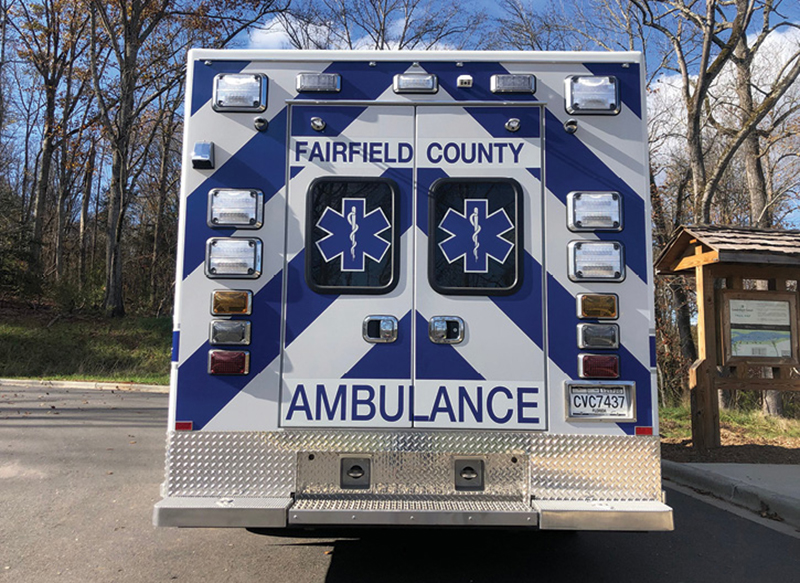 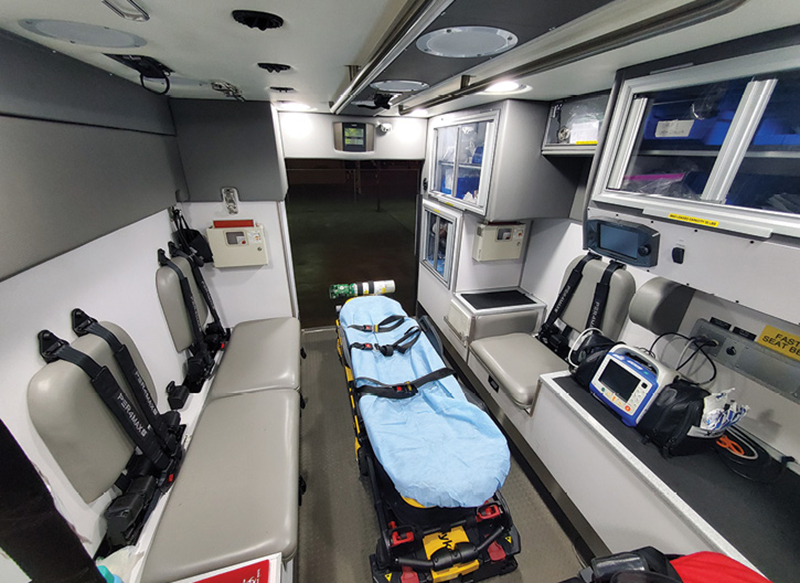 4 The ambulance has a squad bench that can take a collapsible stretcher or two walking wounded patients in the dual seats. All seating positions in the patient module are protected by Per4Max four-point seat belt harnesses. (Photos 4-5 courtesy of Fairfield County EMS.) 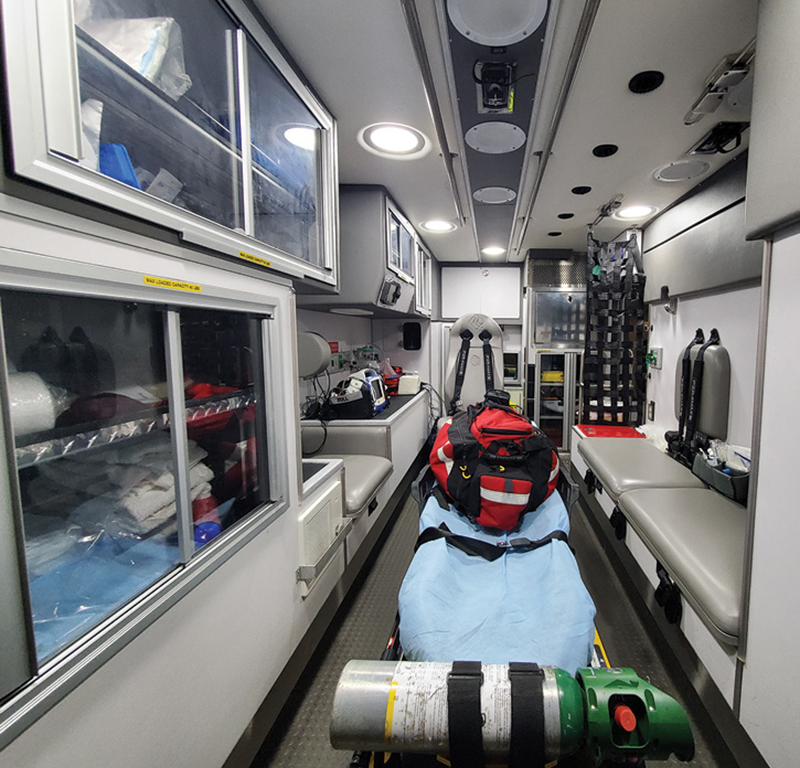 5 The ambulance has a Stryker Power-LOAD cot system.

Inside the patient module, the rig has solid surface countertops, antimicrobial wall coverings, the Stryker Power-LOAD cot mount, Per4Max seat belt harnesses at all seating positions, a Weldon V-MUX multiplex system with 7-inch LCD touch screens on the front and rear switch panels, and color camera connected to the panels.

“Lighting on the Road Rescue ambulance includes Intertek Industrial LED dome lights that provide a cool, white, even light that eliminates shadows within the vehicle, which is part of our Brilliance™ advanced vehicle lighting,” Russell says. “The ambulance also has Whelen LED rear flashing chevron lighting, and Fairfield County EMS is the first ambulance service in South Carolina to have these lights. The rig also has Kinequip, Inc., LED strip crash rail lighting, which has a steady burn function when a door is open.”

Tim Hykes, regional sales manager for South Carolina and eastern North Carolina at Atlantic Emergency Solutions, who sold the Road Rescue ambulance to Fairfield County, says the department “was all about the safety features on the truck, looking to have things that make it safer for their medics as well as easier for them to do their jobs. They wanted a squad bench on the curb side of the interior so they could carry a second patient on a collapsible stretcher if needed or take walking wounded in the two seat positions, which is very useful, especially in rural settings.”

In addition to the extra overhead lighting in the patient module, Hykes notes there are early warning turn signal and braking indicators on the rear wall of the module. “They are half-inch-wide and 12-inch-long LED lights that flash for turns or when the brakes are applied, giving the medic in back a warning of what the driver is doing,” Hykes says. On the exterior of the box, Road Rescue installed strip lighting on the lower rub rail that flashes red and white when in emergency mode and steady bright white as ground lighting when the vehicle is parked at a scene. “It’s another Road Rescue product that helps ensure the safety of the medics on the scene,” he observes. “When this ambulance is moving through an intersection, it is very noticeable.”