Having spent the past two articles discussing tire failures, we must now discuss what to do if a tire fails while you are driving. A tire blowout can be a sudden and startling event. It is critical that a trained emergency vehicle operator knows how to properly react under such dangerous circumstances. An improper reaction to a tire failure can lead to a loss of control and subsequent crash.

When a driver experiences a tire failure, it is often a loud, sudden, and startling experience. As with many critical driving events, a driver’s first reaction is to slam on the brakes and bring the vehicle to a quick and sudden stop. In the case of a tire blowout, this response could invite disaster.

Michelin Tires released a series of videos many years ago that demonstrate the proper handling of a tire blowout. The series is entitled “The Critical Factor” and should be a mandatory module for any emergency vehicle driver training program. By watching this video, students will be able to see a real-life commercial motor vehicle as it undergoes a tire blowout at highway speeds.

As the video demonstrates, the proper reaction to a tire blowout is not to slam on the brakes. In fact, the reaction should be just the opposite. A trained driver should get a firm grip on the steering wheel, maintain a safe heading, and accelerate as necessary to maintain the vehicle’s forward momentum. Once the driver has brought the vehicle under control, he can slowly decrease the speed of the vehicle and bring it to a safe stop by coasting or, if absolutely necessary, with an extremely light press of the brake pedal. 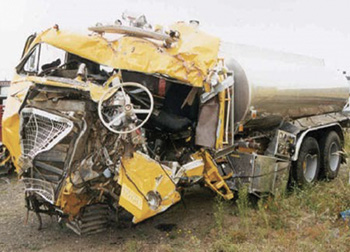 1 The aftermath of the tender crash. The vehicle left the road and struck a tree after the front right tire blew out. (Photo from NIOSH Firefighter Fatality Report 2001-36.) 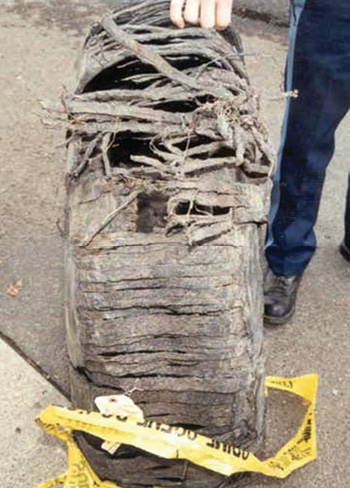 2 The tire that failed, causing the crash. Investigators determined that the tire was 22 years old and obviously aged and brittle. (Photo from NIOSH Firefighter Fatality Report 2001-36.)

Although accelerating in an emergency situation may seem counterintuitive, the physics of the situation prove otherwise. When a tire blows out, it will create a dragging force on one side of the vehicle. As the drag increases, it will tend to pull the vehicle to one side. If the vehicle is pulled far enough, it may leave the travel lane. Once a vehicle leaves the travel lane, it may hit a fixed object or, in the case of a high center of gravity vehicle, hit a soft shoulder and then roll over. There have been countless line-of-duty deaths across the United States that demonstrate this very scenario.

Despite the number of tire-related vehicle crashes in the fire service, few emergency vehicle operator courses (EVOC) provide training on how to handle a tire-related emergency. Obviously, fire chiefs and administrators would take issue with an instructor rigging a tire with explosives and blowing it out on the highway. However, with a little creativity, it is not hard to simulate a tire blowout.

As with any type of driver training, the qualified instructor must use common sense and good judgment to determine a safe location for this type of training exercise. Once a safe spot has been located, the driver trainer can instruct the driver to begin driving. At some point during the exercise, the instructor can say “blowout,” blow the air horns, or use some other method to simulate a tire blowout. When the tire “blows out,” the driver should take the necessary steps to maintain control of the vehicle. The trainee should practice getting a firm grip on the wheel, keeping the vehicle straight, and using acceleration to increase the vehicle’s forward momentum to prevent the blown tire from dragging the vehicle off the road. Granted, this is all pretend, but at least the driver trainee is being exposed to the possibility of a tire blowout and the proper method of reacting.

Another important teaching point for this exercise is the fact that an emergency vehicle driver should not be running the vehicle at the governed speed. If the vehicle speed is maxed out, the driver will have no extra speed when it is needed. Considering a tire blowout requires the driver to increase speed to regain control, running against the governor will leave no emergency speed to use when needed. Drivers should be taught to always leave themselves a safety cushion so they have some extra speed should they need it.

There have been several instances of fire apparatus and emergency vehicles experiencing catastrophic tire failures at highway speeds. Fortunately, many of these tire blowouts have only resulted in damage to the vehicle. However, there have been other times when a tire blowout led to a crash that resulted in death or serious injuries to firefighters.

The National Institute for Occupational Safety and Health (NIOSH) Fire Fighter Fatality Investigation and Prevention Program provides case studies related to firefighter deaths across the nation. One such case study (F2001-36) describes a fire apparatus crash that occurred after the right front tire blew out on a tanker/tender in Oregon. In this instance, a firefighter was returning the vehicle to the firehouse after having maintenance done on the tank. As the firefighter was driving on a major highway, the vehicle experienced a catastrophic failure of the right front tire. This tire failure caused the vehicle to leave the roadway and strike a large tree. Sadly, this crash resulted in the death of the firefighter driving the apparatus.

Investigation of this crash revealed that the tire that failed was nearly 22 years old and obviously aged and brittle. The crash highlights the importance of maintaining proper air pressure in vehicle tires as well as the importance of replacing tires on a regular basis. Failure to keep a close eye on these issues can result in a similar tragedy as that which occurred in Oregon.

The obvious answer to tire-related vehicle crashes is to prevent them in the first place. This should include regular apparatus inspections that keep a close eye on the condition of the tires, the age of the tires, and the air pressures. However, there may be times when a tire will still blow out at highway speed. When this happens, the driver must be trained and ready to react appropriately to prevent a loss of control and a potential crash.

Chris Daly is a 23-year police veteran currently serving as a patrol supervisor in West Chester, PA. He is an accredited crash reconstructionist (ACTAR #1863) and a lead investigator for the Chester County Serious Crash Assistance Team. In addition to his police duties, he has served 29 years as both a career and volunteer firefighter, holding numerous positions including the rank of assistant chief. He has a master’s degree in environmental health engineering from Johns Hopkins University and is a contributing author to numerous fire service publications including Fire Apparatus & Emergency Equipment and Fire Engineering. He has also developed an emergency vehicle driver training program entitled “Drive to Survive,” which has been presented to more than 22,000 firefighters and police officers across the United States. He is the author of the book Drive to Survive–The Art of Wheeling the Rig (Fire Engineering). Additional resources concerning emergency vehicle crash reconstruction and seminar scheduling can be found at his Web site www.drivetosurvive.org.