Manufacturers continue to refine and improve on their offerings of handline nozzles, and those improvements have given firefighters a number of options in terms of nozzle stream, flow and pressure, and functionality.

Brian Podsiadlik, municipal firefighting channel manager for Task Force Tips (TFT), says TFT recently introduced the TFT Working Fire nozzle. “Working Fire is a midrange fixed flow nozzle with pressure relief,” Podsiadlik points out, “that’s available in two models—150 gallons per minute (gpm) at 75 pounds per square inch (psi) or 160 gpm at 50 psi. The nozzle has a baffle in a fixed position so if you experience an unintentional event like a surge in gpm and pressure due to a gated wye operating where one outlet is shut and there’s a pressure surge in the open line, or if the pump operator overpressurizes the nozzle, the pressure relief function on the nozzle kicks in and relieves the pressure at the nozzle, allowing the flow of more water but limiting the reaction force.”

He continues, “If you are in a firefight where the water you’re delivering isn’t making an impact and you need more water, you can intentionally overpump the nozzle to get a greater flow but still limit the reaction force and get more gpm to the seat of the fire. If the firefighter doesn’t use the pressure relief function, Working Fire works exactly like a fixed flow nozzle.”

Podsiadlik notes that the Working Fire nozzle has a very rugged construction with a stainless steel ball valve and a straight stream detent. “It’s a positive detent you feel when you change the bumper to straight stream,” he says, “and the detent prevents an unintentional move to a fog pattern.” Podsiadlik adds that in the United States, TFT’s Metro series of fixed flow nozzles is one of the company’s market leaders but that its Flip Tip, G-Force, and Dual Force nozzle lines also continue to be popular. “We’re also seeing a lot of interest in our Transformer piercing nozzle kit, which has a maximum flow of 150° and can be configured to the length and 90° angles needed to fight fires through the floor, walls, the roof, or in a cockloft,” he says.

David Gindlesperger, director of regional development for IDEX Fire and Safety, says IDEX’s Akron Brass Manufacturing Company has improved the functionality and ergonomics of some of its handline models in the past couple of years. “We have standardized some of the flow rates, mimicking our 15⁄16-inch and 7⁄8-inch smooth bores,” Gindlesperger says, “and improved the bail to make it easier to get your hand in there. With the pistol grip, we went to a universal body with a smooth finish around the bottom and a black anodized finish and offer a color clip system that can be customized by the fire department.” 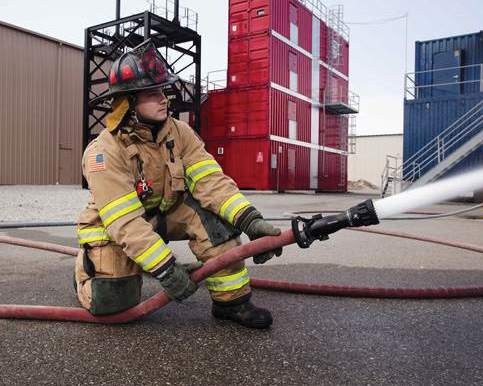 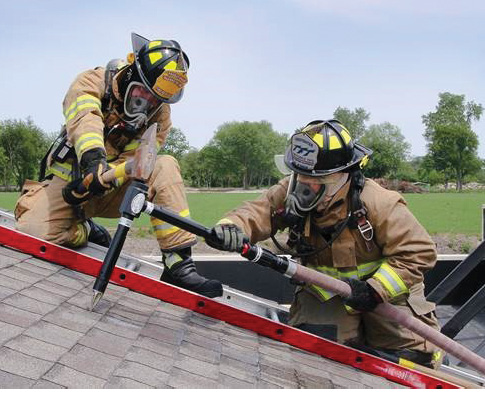 2 Task Force Tips makes the Transformer piercing handline nozzle that can be used to fight fires through floors, walls, roofs, and cocklofts. 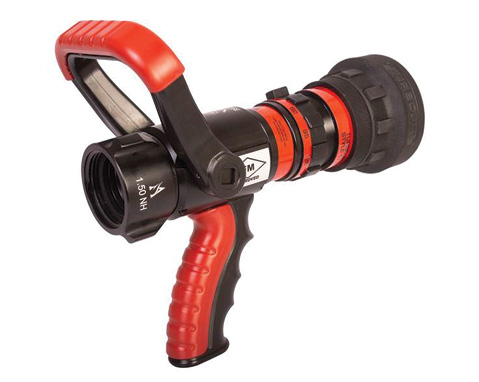 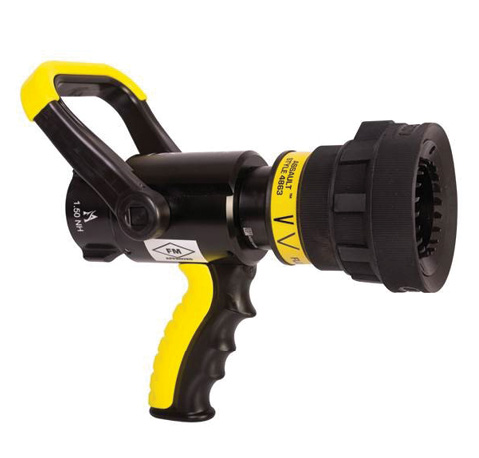 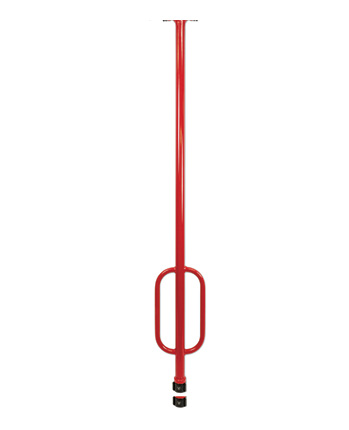 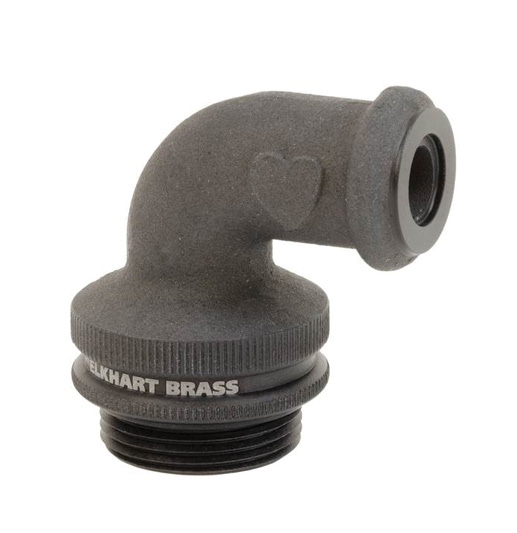 Jason Riggenbach, product manager for Akron Brass, points out that the extra room in the bail handle “makes it easier to operate the nozzle with the left hand and wrap the hose. And we’ve always had color bails and pistol grips, but we’ve updated them to brighter colors and made them snap on instead of being permanent.” Riggenbach notes that Akron Brass’s model 4863 Assault midrange nozzle is popular with fire departments, delivering 160 gpm at 50 psi and 195 gpm at 50 psi. “Our 2341 break apart nozzle with an integrated smooth bore also is gaining in popularity, as is our TurboJet 1720 selectable gallonage nozzles, especially in the West, where the nozzle gives the flow control to the nozzleman.”

Jerry Herbst, director of municipal markets for Elkhart Brass Company, says Elkhart Brass’s XD series of nozzles is available in the fixed flow Chief XD, XD shutoff nozzles, and XD Smooth Bores. “These nozzles are built tough for extreme duty,” Herbst points out, “with a forged shutoff body and forged metal bail handle for maximum strength. As standard, they feature a full, round metal ball for the best stream performance and ergonomic grip inserts that help with handling and can be color coded.”

Herbst adds that Elkhart Brass recently partnered with CAL FIRE for a redesign of the XD-205-BAF brush and forestry nozzle. “It has a 75-psi operating tip pressure and dual flow capability at 30 gpm and 80 gpm by hand rotation,” he says. “It’s an all-metal product with no rubber bumper and has a rigid-based inlet that doesn’t swivel. It only takes a single hand to operate this nozzle because the primary method of attack is over the shoulder.”

Elkhart Brass also partnered with the Fire Department of New York (FDNY) on a Floor Below nozzle, Herbst says. “It’s designed to be operated from the floor below in a high-rise during wind-driven conditions,” he notes. “You hook it up and engage the fire from the window below because the nozzle is designed to capture the strength of the wind through a vent pipe. The nozzle flows 265 gpm at 50 psi and is the equivalent of a 2½-inch attack line to darken a fire down to allow a team to make entry.”

Elkhart Brass also makes a horizontal void nozzle designed for use in attics and cockloft spaces. “It’s 16 inches long and hooks onto a traditional nozzle threading,” Herbst says, “and produces two water streams opposing each other at 90° angles. It operates with a half-inch tip that produces 50 gpm at 50 psi. We also make the Bent Overhaul Tip (BOT), a 90° tip that goes onto a half-inch stacked tip and gives a lower flow for overhaul using a laser-type stream.” 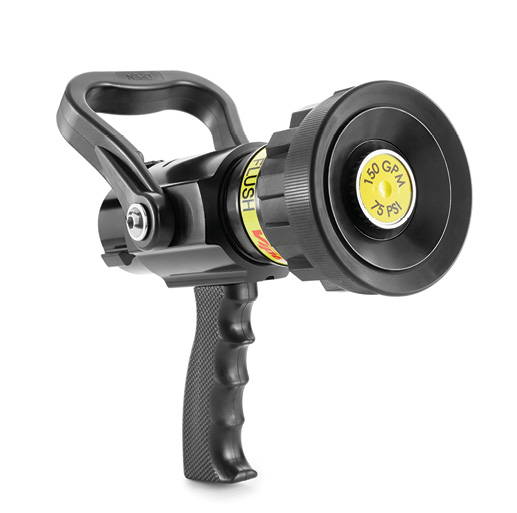 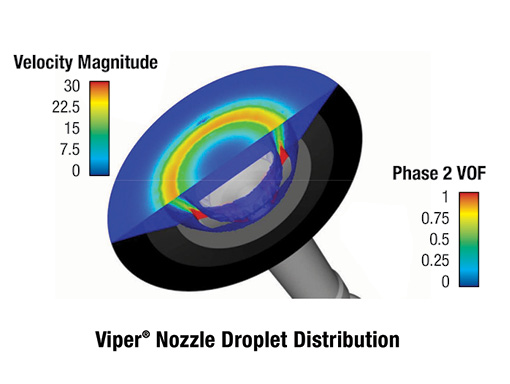 8 By removing the fixed and moving teeth on its nozzles, Kuriyama has created a product with a smooth tip, which the company says creates better droplet protection shield distribution. 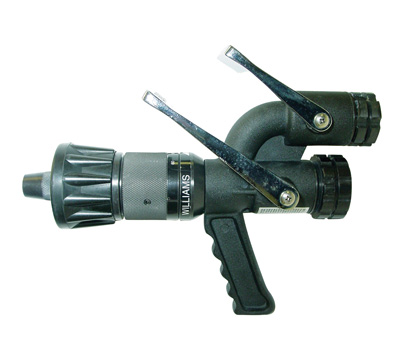 Kuriyama has taken the approach of improving Viper Nozzles’ straight stream performance by reducing friction loss at the nozzle head, according to Olm.

“In theory, reducing friction loss should preserve more of the initial stream velocity, allowing it to propel the water droplets further,” explains Olm.

In an effort to do so, Kuriyama engineers utilized flow simulation software popular in the aerospace industry to measure changes in water velocity at the nozzle head. This information was then used to make product design modifications to maximize stream volume and distance.

Through a patented innovation referred to as Rylstatic®, the teeth were removed, resulting in visibly noticeable improvements in clarity and firefighter protection from flames and fumes.

In addition to stream and shield improvements, Kuriyama is also focused on improving the nozzles’ overall ease of handling. Considered an upgrade on many competitive nozzles, all Viper Nozzles come standard with a dual-drive lever, providing even force distribution on the valve, he says. This creates smoother operation of the shutoff, reduces component wear, and helps control nozzle reaction when opening and closing the valve.

Ultimately, everyone looks for different things when selecting a nozzle, which is why a broad selection is important.

“You can ask two different firefighters and get three different opinions,” jokes Maynard. “That’s why we’re prioritizing field demonstrations. Ultimately, it’s just something firefighters need to see and feel for themselves until they find that right combination of what matters most to them.”

James Morgan, applications engineering manager for Williams Fire & Hazard Control, says all of the nozzles made by Williams Fire are designed with Hydro-Chem™ technology, a center feed tube that allows the nozzle to flow additional product along with the water stream. “For example,” Morgan says, “you can put dry chemical through the center of the water stream to extend the range of the dry chemical agent, and the center channel can also be used to deliver a premixed rich foam solution that’s supplied by a separate proportioning system.”

The Williams Fire Adjustable Flow Dual-Agent Handline nozzle features a pistol grip for secure operation and can be set to flow 60, 95, or 125 gpm by a collar-mounted ring adjustment, Morgan points out. “It also includes a flush setting for flushing out small objects caught in the nozzle, and its water/foam stream is adjustable from full fog to straight stream.”