It seems every fire equipment company’s roots began with a firefighter selling fire extinguishers part time out of the family home. Shipman’s Fire Equipment, in Waterford, Connecticut, is no exception.

Originally started by New London (CT) Fire Department Chief Thomas A. Shipman, it was purchased by volunteer firefighter Sam Wallace from Waterford, Connecticut’s Jordan Fire Company in the mid 1950s. He expanded the growing family business along with daughter Joan and his son Ernie, who also was a volunteer firefighter.

As the business grew, it moved from smaller to larger facilities in New London and in 1978 to nearby Waterford. Its present 20,000-square-foot main building was occupied in 1994. In 1998, an addition was built specifically for the fire apparatus service department. In 2020, a second building was added for shipping and receiving, the air supply department, and hose repair.

Sam retired in 1988. His children continued developing the business—Ernie as CEO and Joan as the bookkeeper. Time and fate can sometimes challenge a family business. Such was the Wallace family’s experience when Joan passed away in 2009 followed by Ernie a year later. Ernie’s daughter Chrissy and her mother Lorraine became Shipman’s primary principals, continuing the family-owned and -operated business paradigm. It continues today as a privately (family) held corporation.

1 Shipman’s Fire Equipment, located in Waterford, Connecticut, just off of two major interstate highways, has been appointed the authorized dealer for Sutphen in Connecticut, Massachusetts, and Rhode Island. 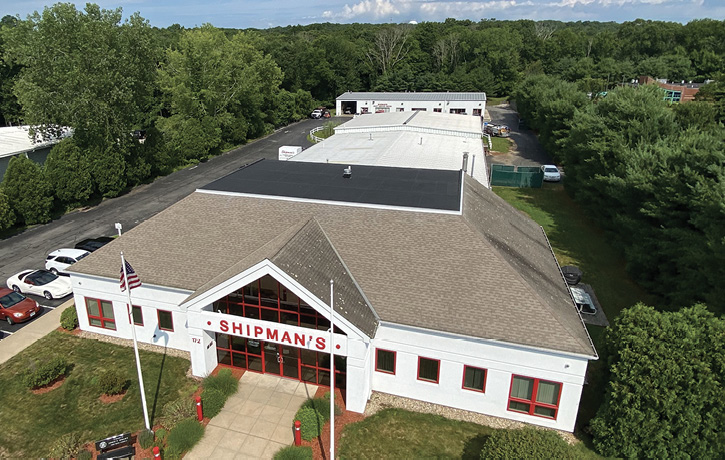 2 An overhead view shows the multiple additions made to the Shipman’s facility. Several more apparatus service bays are presently under construction.

3 A few of its 14 road service trucks in front of apparatus service bays.

Lorraine is Shipman’s COO running the day-to-day operations. Chrissy handles marketing and accounts payable among other duties. An interesting fact is that Theresa Baker, who recently retired, was Shipman’s vice president. Three of the four top management spots were held by women. It appears they run a tight ship.

Chrissy says the company distinguishes between equipment sales and apparatus sales. Vincent Santamauro is the director of equipment sales for the company’s entire territory. Some of the equipment lines marketed include 3M Scott Fire & Safety, Fire-Dex, Holmatro, Globe/MSA, Bauer Compressors, Task Force Tips, Paratech, Snap-tite Hose, Zico, Red Head, Whelen, Amerex, National Foam, Super Vac, Hale, and Elkhart as well as Sutphen and SVI Trucks. Chrissy says, “Our primary territory is Southern New England. A few suppliers have specific states to cover such as Connecticut and Rhode Island. We cover over approximately 650 fire departments throughout Connecticut, Rhode Island, and Massachusetts. Shipman’s will soon have an online store to provides many of our items to customers across the country.”

“In addition, there are six technicians and vehicles on the road daily for our Extinguisher Service Department, as well as a full-time delivery driver who travels throughout our territory delivering products and picking up items to be repaired. We are in the process of adding two more bays for apparatus service, as well as additional office space.”

Shipman’s Web site shows a refurbed rig for the Richmond-Carolina (RI) Fire District. Asked if they do much refurb work, Chrissy says, “This was the first large refurbishment we have completed, but we have more lined up and are looking forward to doing others.”

Shipman’s Web site shows short bios for quite a few of the sales staff. Chrissy states, “We only have a selection of team members listed on the site. There are 44 total team members with only a few being part-time. About 80% of them are current or former firefighters, both volunteer and career. We have 11 dedicated sales representatives in total.”

Santamauro adds, “I truly believe we have the best fire equipment sales team in the business. With well over 200 collective years of combined fire service experience, the Shipman’s Sales Team has worn it, flowed it, climbed it, tested it, rescued with it, rode in it, and used it. They have a real-world understanding of our customers’ challenges and will always provide honest advice that can be trusted. Our dedicated team of professionals put the firefighter first, above all.”

Michael Kirchhoff, Shipman’s president, has been with the company for 35 years. “For all the years we’ve been here, the customers have been our number one priority,” he says. “That, combined with the service we provide after the sale, has helped us to sustain for as long as we have. Our primary focus is to make sure our customer base continues to have the confidence that Shipman’s will be there during the hard times, like now. We will always help them. And, that’s what will help us overcome these hard times. We are here for them while they are helping others.”

Jim Lyons, recently appointed as Shipman’s director of apparatus sales, has been a fixture in the New England apparatus scene for almost three decades, serving in various capacities as a salesman, sales manager, and regional sales manager for an apparatus manufacturer and most recently as an independent sales consultant specializing in apparatus design, specification writing, inspections, and in-service training. Chrissy said Shipman’s looks forward to Jim reenergizing apparatus sales in their tri-state area.

Lyons says, “Shipman’s is very fortunate in representing both the Sutphen and SVI lines of customized fire apparatus. It affords our professional sales staff a wide range of product to meet the individual requirements of the fire departments throughout the Southern New England states of Connecticut, Massachusetts, and Rhode Island. SVI, Sutphen, and Shipman’s are all family-owned and -operated businesses that expound family values with their customers.”

Lorraine adds, “We cannot overstate how proud we are to be the authorized dealer for Sutphen and SVI. The success of the Apparatus Sales and Service Department is due to the dedicated team members we have at Shipman’s. Their cooperative effort, knowledge, and dedication to customer service is why we are able to support these top apparatus manufacturers.” Asked if they sell ambulances, Chrissy responds, “We do not, however we have three technicians who are EVT-certified and able to service them. If the right line were to come along, we certainly would consider selling them.” 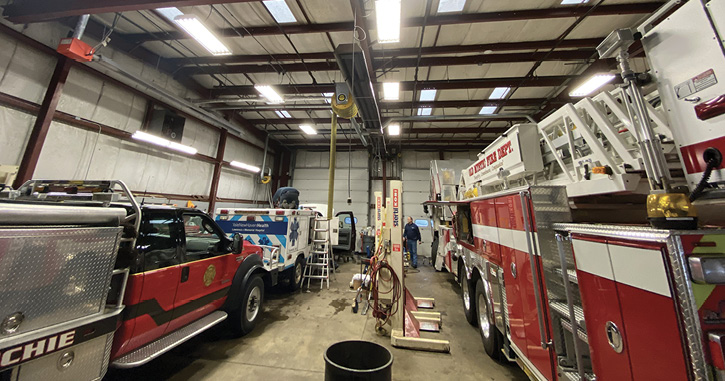 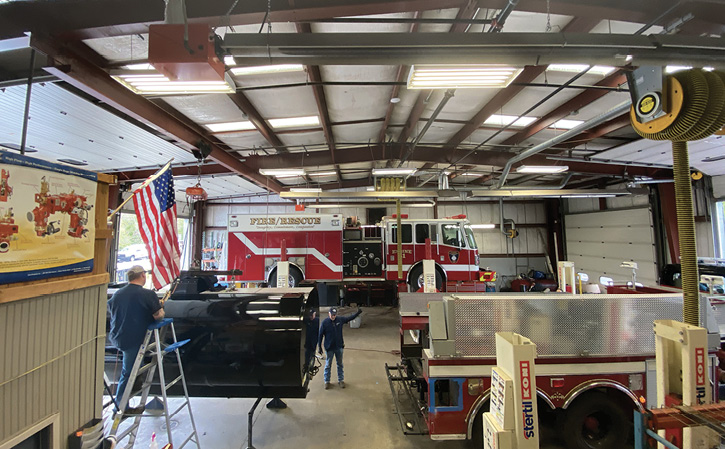 5 Removing a booster tank on a tanker refurbishment project.

Zach Rudy, Sutphen’s director of sales and marketing, says, “Sutphen’s addition of Shipman’s Fire Equipment to its family of dealers has deepened its hold in the New England fire community. Through decades of commitment, strength, and dedication, the two multigenerational, family-owned businesses have earned the respect of fire industry experts. With Sutphen’s unmatched product and Shipman’s deep-seated New England roots, both companies are excited for the growth opportunities that come with the addition of a new dealer.”

Robert Sorensen, vice president for sales at SVI Trucks, adds, “For us, it was perfect timing. We were looking for a good dealer in the New England area, and Shipman’s was looking for a new fire apparatus line to represent. Jim Lyons, who we’ve known and respected for years, had just gone to work for Shipman’s Fire Equipment as director of fire apparatus sales. I believe Jim was looking for like-minded companies with a passion for the fire service and also an established family company like Shipman’s. With SVI’s emphasis on rescues, it was a perfect match with Shipman’s other apparatus lines they represent. SVI builds a complete line of custom or commercial fire engines, rescues, hazmats, breathing air support, water supply, and wildland fire apparatus. We look forward to a long relationship with Shipman’s Fire Equipment and supporting their sales and service endeavors in the New England area.”

Shipman’s facility is located at 172 Cross Road in Waterford, Connecticut, just five minutes from both Interstate Routes 395 and 95. Waterford is just south of New London, less than 20 miles from the Rhode Island border, and less than an hour from Massachusetts. From Shipman’s Web site (https://www.shipmans.com/): “We are a third-generation, family-owned and -operated business, that truly cares about its customers. Shipman’s was founded by a firefighter, grown by firefighters, and continues to have both current and past firefighters as part of the team. We are proud to be able to serve first responders in New England and are grateful for the trust they put in us every day!”