Many fire equipment dealerships have started when the owner, usually a gung-ho firefighter, began a part-time business selling and servicing fire extinguishers.

Other start-ups could have been when energetic firefighters with an enthusiasm for fire apparatus were enticed by a vendor that recently delivered a new rig to their department: “Hey, would you be interested in selling these part-time?” Often, they later would start their own businesses. Then there are the family businesses that have been passed down from generation to generation.

None are the case with Kendal Kohler, the current owner and president of AAA Firepro, Inc. of New Mexico. Kohler was a commercial lender. He was a banker who wanted a change from the regulatory environment of banking: “I always wanted to be self-employed and always felt that the customers I was lending money to as a commercial banker had made a better career decision than me. So, I bought the business from a former banking customer.”

Kohler and his wife Kelsey purchased AAA Firepro in 2012. Like many others, the business originally started as a local extinguisher company. Since its inception in 1968, it has had several owners over the years. Koehler said they were individuals or small family-owned corporations that either sold out to retire or to relocate to other areas.

1 AAA Firepro is located in this 8,500-square-foot facility on Sheeps Boulevard in Clovis, New Mexico. (Photos courtesy of AAA FirePro.) 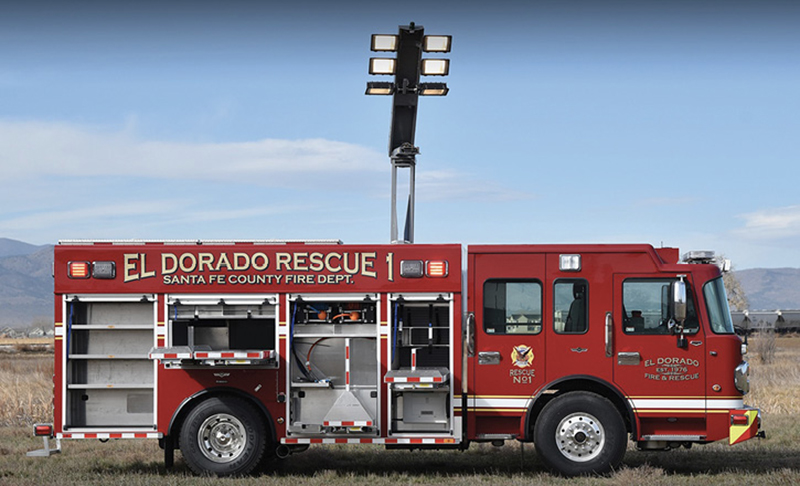 2 This SVI Trucks custom-built rescue on a Spartan cab and chassis was delivered to the Eldorado Fire Department in Santa Fe County, New Mexico. 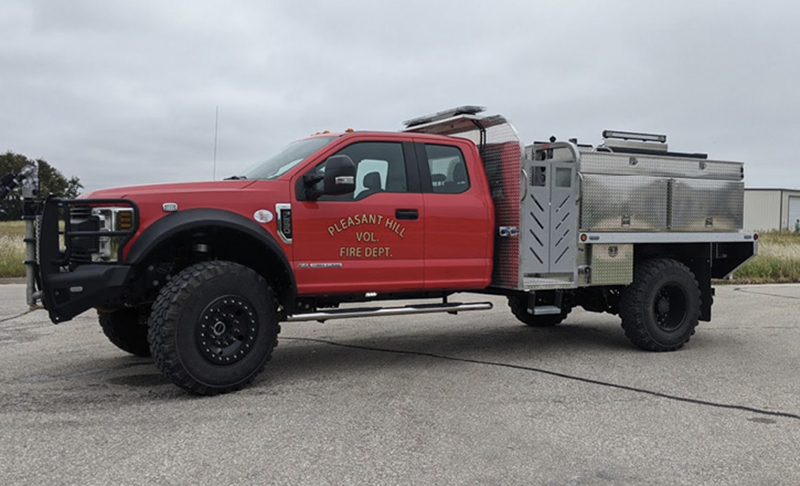 AAA Firepro is located in an 8,500-square-foot facility on Sheeps Boulevard in Clovis, New Mexico (photo 1). Fire extinguisher sales and service are still a major portion of the business, with 2,000 square feet of the building dedicated to extinguishers and a hydrostatic test shop. The balance is devoted to an apparatus service bay, office space, and warehousing for product.

Interestingly, when Kohler purchased the business, he was not a firefighter. He lived in Clovis, which is serviced by a career department. In 2016, he moved west to the much smaller community of Fort Sumner, where he joined its volunteer fire department.

Although New Mexico is the fifth largest state in the Union, it is the sixth least densely populated, with only two cities with a population of more than 100,000. Las Cruces has around 100,000 people and Albuquerque has around 560,000. Los Cruces is 300 miles from Clovis and Albuquerque is around 200 miles away. Only three interstate highways run through New Mexico. Clovis is about 10 miles from the Texas border.

Kohler said about 85% of his customer base is volunteer, which closely mirrors his estimate of his primary territory being 70% rural and 30% in small towns that might have a small career or combination department.

5 Another Unruh delivery by AAA Firepro was this brush rig to the Folsom (NM) Fire Department.

6 Rigs with top-mount operator panels are common in AAA Firepro’s sales territory. This Smeal pumper on a four-door chassis was delivered to the Logan (NM) Fire Department. A unique feature in the territory is the crosslays located behind the cab at the front of the walkway. 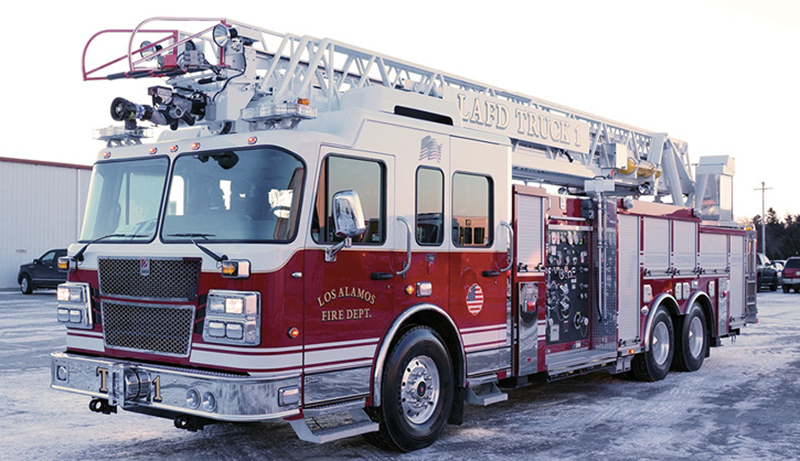 7 Typical of quint deliveries by AAA Firepro are rear-mount Smeal apparatus on Spartan chassis. This is one of two that have been in service in the Los Alamos (NM) Fire Department.

8 This Smeal 100-foot mid-mount aerial platform mounted on a Spartan cab and chassis is on order for the Hobbs (NM) Fire Department.

AAA Firepro began selling apparatus in 1992 when it picked up Smeal Fire Apparatus for the state of New Mexico. In 2002, it became a dealer for SVI Trucks. When Spartan acquired Smeal around 2016, all the Spartan brands became available to the company. Unruh Fire was added in late 2018.

The company sells about a half dozen rigs per year, with pumpers, tankers, and wildland-type apparatus being the most popular. Rescue truck orders have increased in the past several years. The company does not sell ambulances. Koehler: “All the apparatus we sell are NFPA 1901 or NFPA 1906 compliant.”

He mentions Firepro is not a service-driven apparatus dealer. Because of the rural nature of the territory, most service work is mobile based—done in the individual fire stations. Service work is subcontracted to qualified local providers. He elaborates: “Service seems to be a tough nut to crack here in New Mexico. I had a part-time guy for a while, and we did some of our own service, but it was hard to keep him busy enough to justify the expense. In addition, trying to find qualified help in that area is almost impossible.”

The apparatus product mix runs the gauntlet from flatbed-type brush trucks and slip-on skid units with small 150-gallon-per-minute (gpm) pumps and a booster reel to 100-foot mid-mount aerial platforms with 600-plus-horsepower motors and 2,000-gpm pumps (photo 8). Reflecting on the geographics of his primary sales territory, Koehler says: “Rural New Mexico has seen many fire departments purchasing more NFPA 1906-compliant wildland apparatus if they can get fire marshal approval. They fight more grass fires than structure fires and so they want trucks geared in that direction.” Following are Koehler’s responses to a one-on-one interview on various aspects of the apparatus being purchased in his territory.

Koehler: “The majority of our wildland-type apparatus, particularly in the eastern part of New Mexico, have either a bumper-mounted monitor or ground sweeps or even both for pump-and-roll operations. Funding for wildland apparatus purchases is via the state fire marshal’s office that has to approve all NFPA 1906 specifications. Many of our wildland apparatus are designed with their pumps mounted in the middle of the rig, allowing short ‘protection lines’ to be stretched for safe operation from the truck’s cab. Most of our brush truck sales have all-aluminum treadplate bodies. It is cost-effective.”

“Unruh Fire was added to our product line in late 2018. Their line of brush trucks has been popular with local departments. We delivered one of their Ford F-350s to the Pleasant Hill Fire Department (photo 4). The rig features multiple aftermarket chassis upgrades and a 500-gallon booster tank. Another popular Unruh brush truck style that was delivered to the Folsom Fire Department is mounted on a heavier Freightliner M2-106 chassis and has a 1,000-gallon tank (photo 5). Having an off-road capability and increased water capacities is very important to many New Mexico agencies.”

“We sell mostly wet side and dry side tankers. Only a few departments prefer elliptical tanks. The most popular size is 3,000 to 3,500 gallons on tandem axle chassis. Some are strictly ‘water haulers’ while others are NFPA 1901-compliant pumper-tankers. It really depends on the department. The last couple we have sold have been pumper-tankers.”

“Generally, if a fire department has the budget, they prefer a platform truck to regular ‘stick’ ladders. However, some departments will still look for and purchase ladders as well. Most go with the 100-foot varieties as opposed to shorter versions. Most aerial devices are sold as quints (photo 7).”

“Rural departments seem to favor commercial chassis, and there are some customs in the career departments. Aluminum is the favored method of construction. The most common pump size is 1,500 gpm. Most pumpers are also equipped with pump-and-roll capability as well. Booster tank capacities range from 1,000 to 1,200 gallons. In rural New Mexico, the top-mount pump operator’s panel is definitely the preference (photo 6). However, some bigger municipalities prefer the side mount to shorten up the truck.”

“There seems to be a trend for New Mexico fire departments to purchase multi-function apparatus such as pumper-rescues and pumper-tankers. Everyone seems to want a truck that is multi-purpose. However, many of them are realizing that when you pack so many features into a truck, it is okay doing everything but doesn’t really excel at any one thing.”

“There’s been an increase in both large and small rescue truck activity on both custom and commercial cabs and chassis. We have done more smaller walk-arounds mounted on Dodge and Ford chassis. We’ve also done some medium size walk-around SVI rescues on Freightliner and Spartan chassis (photo 2). The majority of our rescue sale activity has been in the Santa Fe County area.”

“Probably less than 5% of our sales are done with the competitive bidding process. That doesn’t mean fire departments do not shop around. They may still get pricing from several manufacturers and dealers, but they’ll usually purchase off a co-operative bidding contract.”

“We are getting some interest from career (full-time) departments about the clean cab concept but haven’t seen much discussion of it with volunteer departments. It seems like manufacturers are always trying to roll out a new feature or outdo one another with features. Personally, I don’t know if most of the new ideas will add that much value in our market. I would like to see the manufacturers really focus on quality and delivery time and improve those aspects of their operation rather than trying to be so ‘feature’ rich.”

“AAA Firepro’s future plans are to be really focused on taking care of the customers in our primary trade area. There are no major plans to change up our business.”