It has become a large, proactive fire department since then, operating in a combination fire rescue system, with volunteers working with Montgomery County firefighters and EMT/paramedics to staff a fleet of five front-line apparatus and one reserve piece.

Chief Michael Ryman says, “We formally started looking into a replacement of our [current] heavy rescue back in 2017. Our apparatus committee started an apparatus replacement program to replace our special units roughly every 12 to 15 years if possible. This is based primarily on a county replacement program that considers mileage as well as maintenance issues.”

Ryman says the committee did a lot of research, initially looking at four manufacturers and eventually narrowing it down to two. “We are lucky in that we didn’t have to go out to bid for this purchase,” he said.

E-ONE won the business because the company representative listened to the department’s ideas and designed the vehicle to meet its staffing issues, Ryman says, adding that E-ONE was able to accommodate customized equipment the department wanted to carry.

“They basically designed what we wanted and have space to spare,” Ryman says. “Some of the changes we made to this vehicle compared to our old unit are that it’s a foot and a half shorter in length and shorter in height too. It was designed as a walk-around body as opposed to a walk-in. We also didn’t need a large generator to run our extrication equipment.”

According to Mark Bulla, Burtonsville’s apparatus committee chairman and life member of the department, the specs covered all the department’s needs.

Squad 715, as the new unit is dubbed, is built on an E-ONE Cyclone II cab and chassis and powered by a Cummins ISX12 engine with an Allision EVS4000 transmission. It has a PTO-driven Harrison Integrated Hydraulic Technology (IHT) system powering a 25-kW Harrison generator, a 20,000-pound Ramsey hydraulic winch in the rear, and six preconnected Genesis hydraulic tools. An additional valve is included to transfer power from a preconnected line to a front bumper port for additional hydraulic tool capability.

The vehicle is equipped with a full Whelen emergency light package as well as HiViz 12V LED floodlights on all sides and lights heads on the Will-Burt light tower.

“I don’t think we missed anything when it came to the design and specs of this rig,” Bulla says. “What was unique for this build was that the cab and chassis were built at E-ONE’s Ocala, Florida, plant, then shipped to the Buffalo, New York, plant for the body.”

Bulla said Burtonsville firefighters traveled to Buffalo to do the initial design specifications meeting and relied on weekly photos to monitor the construction of the apparatus. He added the department did its final inspection in Buffalo as well. 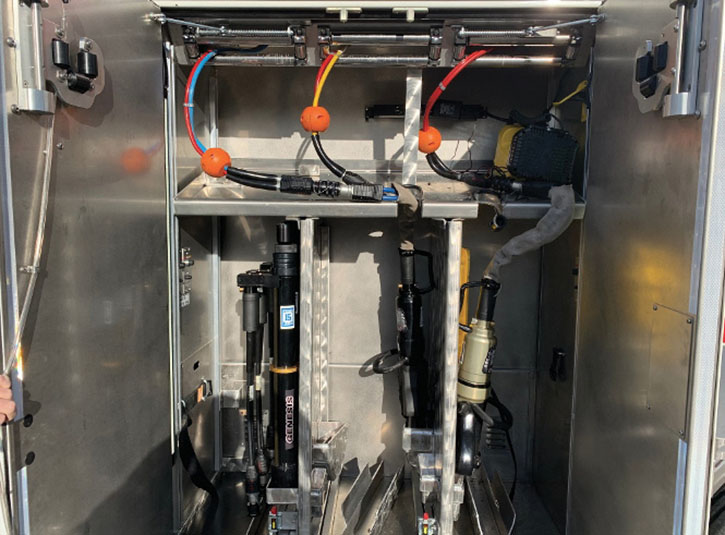 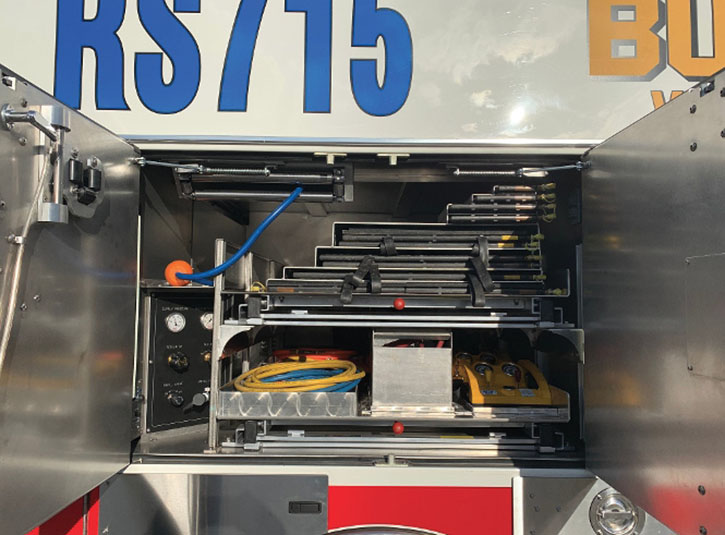 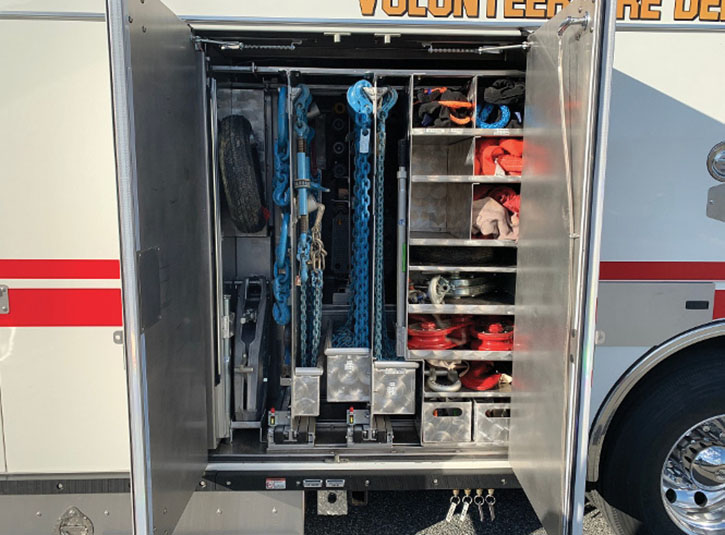 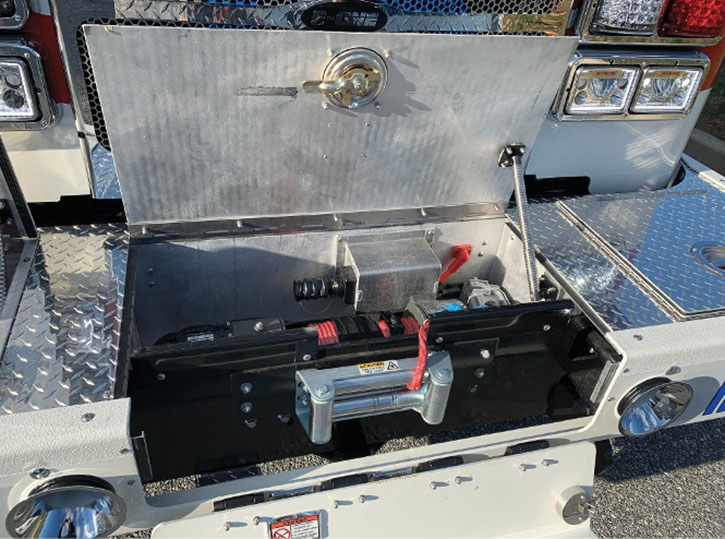 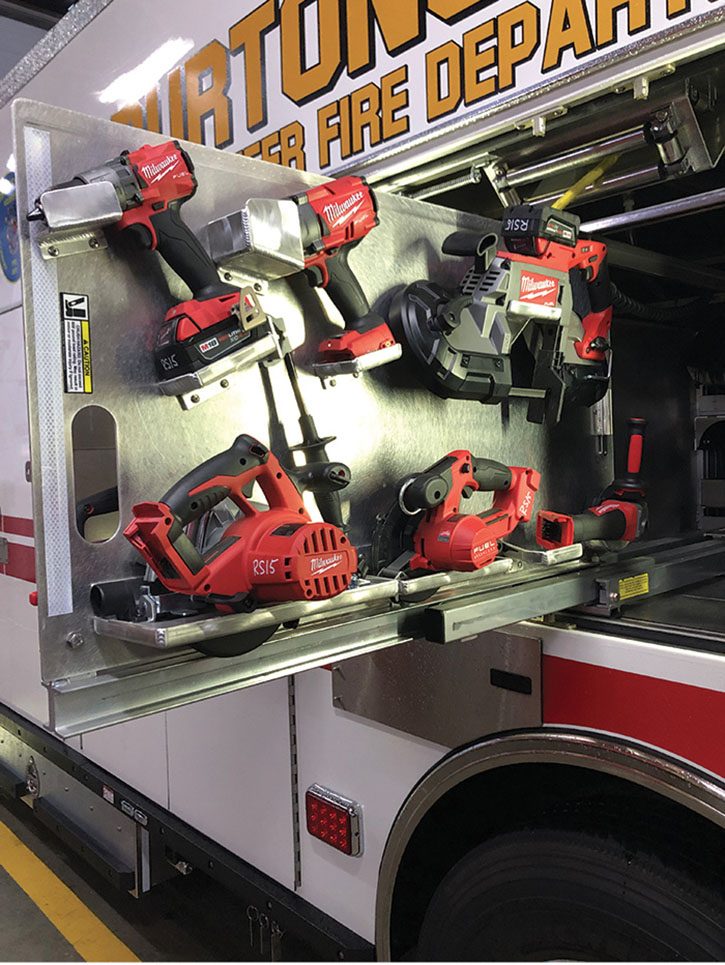 6 Compartment with a collection of Milwaukee electric tools. 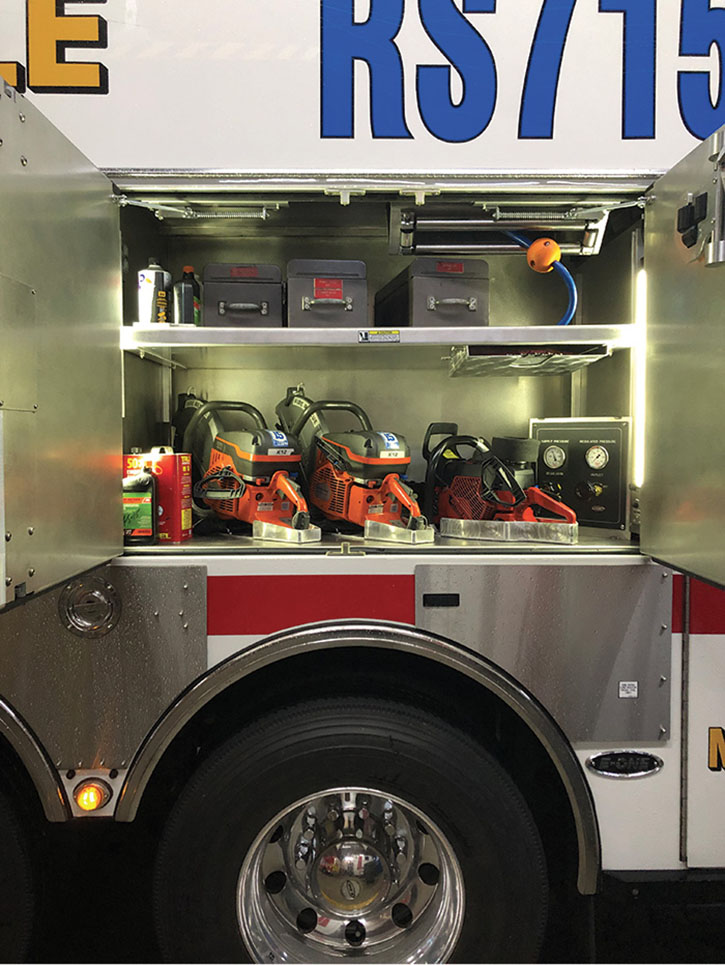 “We were pleasantly surprised to find less than five discrepancies when we did the final inspection,” Bulla says. “They were corrected and we have had no problems since. The engineers at E-ONE were great to work with. Their customer service was impressive to say the least.”

Burtonsville worked with its local dealer, Patriot Fire Apparatus in nearby Grasonville, MD, to mount all the equipment, a process that took almost three months, Bulla says.

“They were meticulous and listened to all of our ideas,” Bulla says, adding that the dealer provided all the service for the rescue as well. “Any problems we had were corrected within 24 hours.”

If you ever worked on the design and specs for a new heavy rescue, you know it can be a daunting task, especially if you are replacing an existing vehicle that has become out of date. Technology has changed immensely from 20 to 25 years ago, and keeping abreast can be hard at times. You have not only a vehicle cab, chassis, and body to contended with but the changes in rescue and extrication tools, struts, hydraulic systems, electrical systems, battery-powered tools, and other equipment.

The mounting of the tools in the vehicle’s compartments should be left to the dealership. It has the experience to mount the equipment and will use the space most efficiently. Also make sure you don’t overload the apparatus weightwise. The best thing you can do is, before you decide on what you want to carry, look in the appendix of National Fire Protection Association 1901, Standard for Automotive Fire Apparatus. Look at the weight calculator. It lists all types of equipment and what each piece weighs. It’s something you should discuss with your manufacturer before you build. That’s not to say your own in-house mechanic can’t help you, but sometimes the mounting is included with the cost of the vehicle.

Design your vehicle not only for present needs but for the target hazards you may encounter in the future, and provide for extra space if you need it.