The trend in aircraft rescue and firefighting (ARFF) trucks in recent years has been to increase their firefighting and rescue abilities as well as handle a wide variety of airport and aircraft scenarios.

The types and sizes of ARFF rigs depend on an airport index determined by a combination of two factors—the length of air carrier aircraft and the average daily departures of those aircraft.

The Federal Aviation Administration (FAA) developed ARFF vehicle requirements (Class 1 through 5) using National Fire Protection Association (NFPA) 414, Standard for Aircraft Rescue and Fire-Fighting Vehicles, as its baseline as well as an airport index the FAA uses to rate airports by the length of aircraft using the airport (Index A through E).

Jack Bermingham, business unit director for Oshkosh® Airport Products, says Oshkosh has two main ARFF product lines for United States customers—Striker® and Stinger™. “The Striker is available in three configurations, 4×4, 6×6, and 8×8,” Bermingham says. “Each model has a foam tank integrated into the foam/water tank that can hold two to four loads of water/foam concentrate. Foam tanks are sized to be 14 percent of the water capacity when running 6 percent foam, so the unit will get two tanks of water to one of foam.”

Oshkosh ARFF units use an Oshkosh Power Uniter™ that brings two engines and transmissions into power for the water pump and the vehicle, allowing the rig’s water pump to be engaged at any time and at any speed, Bermingham points out. The Striker 4×4 and 6×6 ARFF trucks are powered by Tier 4 final Scania DC16 16-liter V8 diesel engines rated at 700 horsepower (hp) and Allison 4800 EVS automatic transmissions. The Striker 8×8 has two Scania engines.

Oshkosh also offers its Snozzle High Reach Extendable Turret (HRET) in 50- and 65-foot configurations on the Striker models, controlled by the Oshkosh K-Factor™ alignment system that displays the position of the Snozzle piercing tip to the fuselage, eliminating depth percent issues to maximize precision, Bermingham says. A joystick-controlled roof turret can flow 1,585 gpm, while a bumper turret will put out from 600 to 1,250 gpm. An electric version of the Striker is being designed and will be put into production, Bermingham adds.

Oshkosh’s Stinger is built on a Ford F-550 chassis and is geared toward smaller commercial airports, Bermingham says. The Stinger carries 300 gallons of water, 40 gallons of foam, and a 250-gpm pump module powered by an auxiliary engine. Oshkosh offers a piston pump foam injection system on the truck as well as a single- or dual-tank foam eductor system. The rig also has a 500-pound dry chemical capacity.

Duane Kann, eastern region sales manager for Rosenbauer, says Rosenbauer makes the Panther 4×4 and 6×6 models for the U.S. market. “Most of the ARFF trucks we sell are Panther 4×4 units, usually to Index B and C airports that make up the vast majority of airports in the U.S.,” Kann points out. “We also sell a decent number of Panther 6×6 trucks to Index D and E airports.” 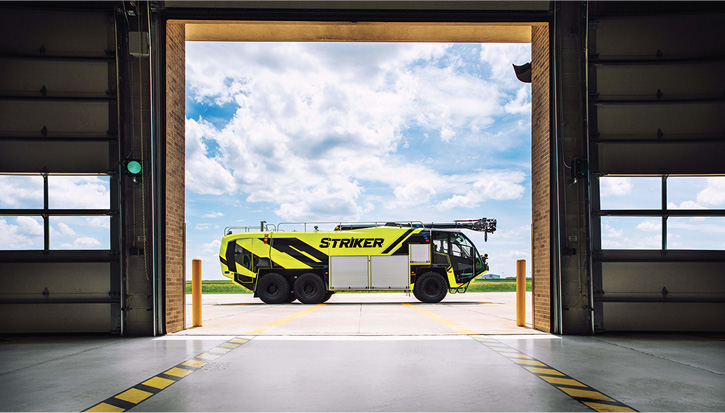 1 Oshkosh® Airport Products makes the Striker® ARFF truck in three configurations: 4×4, 6×6, and 8×8—shown here as a 6×6 with an HRET and piercing nozzle. (Photos 1-2 courtesy of Oshkosh Airport Products.) 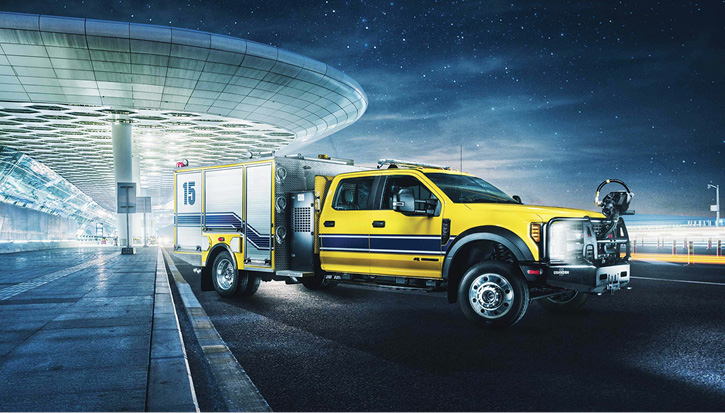 2 The Stinger™ line of ARFF trucks made by Oshkosh is built on a Ford F-550 chassis and is geared toward use at smaller commercial airports. 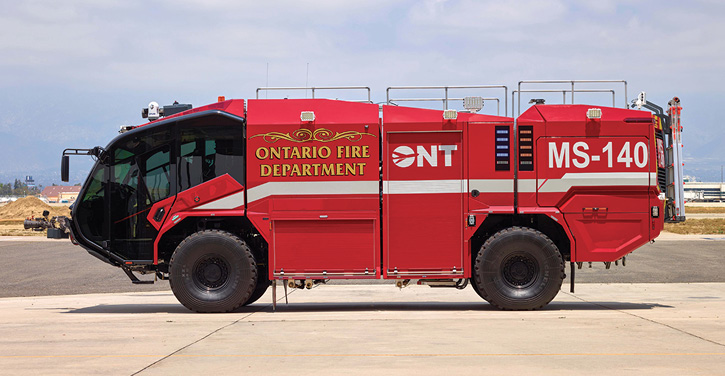 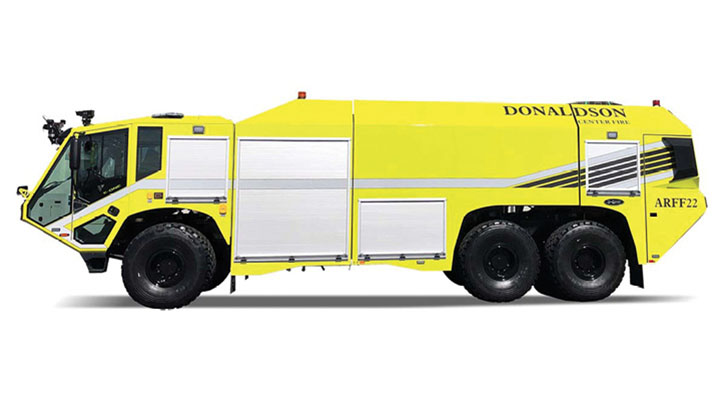 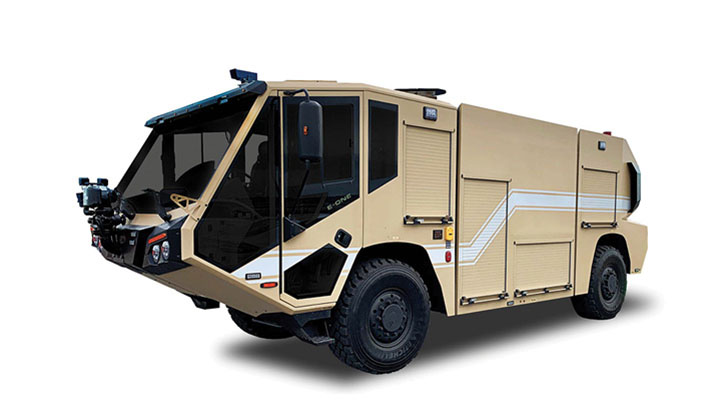 5 This air transportable TITAN AT 4×4, which can fit inside a military C-130 aircraft, was built by E-ONE for the U.S. Air Force.

7 This ARFF rig built by Unruh Fire for the Larned (KS) Fire Department carries 500 pounds of dry chemical and a CAFS.

Kann says the Panther 6×6 has a Rosenbauer N80 2,100-gpm pump; carries 3,170 gallons of water, 400 gallons of foam, 450 or 500 pounds of dry chemical, and 460 pounds of Halotron; and is powered by a Volvo Penta diesel engine and a twin disc electronic transmission. “The HRET on the Panther 6×6 is 54 feet long and has a RM65 turret that can carry either a ChemCore nozzle, which embeds dry chemical in the center of the water stream, or a water/foam/fog nozzle,” Kann notes. “The bumper turret is a RM35, which can flow up to 1,250 gpm and can take the same nozzles as the RM65.”

Rosenbauer’s Panther 4×4 has a Rosenbauer R600 1,850-gpm pump, 1,585-gallon water tank, and 200-gallon foam tank; carries 450 or 500 pounds of dry chemical and 460 pounds of Halotron; and uses the same engine and transmission as the Panther 6×6. Both Panther models feature a Monitoring and Data Acquisition System, a CleanAir Recirculation Air Scrubber, an electric-deploy ladder rack, an EMS cabinet in the cabin, four exterior cameras that create a 360-degree live video view, and a forward looking infrared (FLIR) camera.

Rosenbauer also makes the Airwolf Class 2 and 3 ARFF trucks. The Class 2 Airwolf is built on a Ford F-550 chassis, Kann says, and carries a Darley 2-1/1AGE 500-gpm pump, 300 gallons of water, 40 gallons of foam, and dry chemical Halotron or a compressed air foam system (CAFS). The Airwolf Class 3 is built on an International commercial chassis and carries the same equipment but has a 500-gallon water tank.

R.J. Jones, director of U.S. government sales and airport products for REV Fire Group, says REV makes three models of ARFF trucks through its E-ONE brand—the TITAN™ 4×4, TITAN 6×6, and TITAN AT 4×4. “The TITAN 6×6 carries a 3,000-gpm pump, 3,170 gallons of water, 500 pounds of dry chemical, and 460 pounds of Halotron and is powered by a Scania DC16 Tier 4F diesel engine rated at 670 hp combined with a twin disc transmission/transfer case/power divider,” Jones says. “The TITAN 6×6 can take either a 65-foot or a 54-foot HRET with a penetrating nozzle.”

The TITAN 4×4 is powered by the same drivetrain as the 6×6 and carries 1,600 gallons of water and 500 pounds of dry chemical and has the option of carrying 460 pounds of Halotron. The unit can be fitted with the 54-foot HRET, Jones points out. The TITAN AT 4×4 is an air transportable ARFF truck that can fit on a military C-130 aircraft, he notes. “It has a wheelbase about four feet shorter than the standard TITAN 4×4 and is 70 inches shorter in overall length,” Jones says, “The AT has 1,000 gallons of water and 500 pounds of dry chemical and an air ride suspension for a lower ride height to get it in and out of the aircraft.”

Schamle says the Ford F-550 ARFF truck carries up to 300 gallons of water and has a 500-pound dry chemical tank with dual 400-cubic foot nitrogen bottles. Unruh also makes a version of the ARFF truck that carries a TM-5300 CAFS firefighting skid and a dual-agent bumper turret. The Freightliner M2 106 model that Unruh builds, Schamle notes, can be outfitted with all the same equipment but has a larger water tank at 500 gallons.