In a politically correct world, ambiguous can mean vague or imprecise or confusing. In a competitive bidding environment, ambiguous could be interpreted as misleading or disingenuous or even deceptive.

Reputable fire apparatus manufacturers do everything they can legally, morally, and ethically acceptable to promote their product. Many are very good at marketing; some excel at it. Kudos to them. 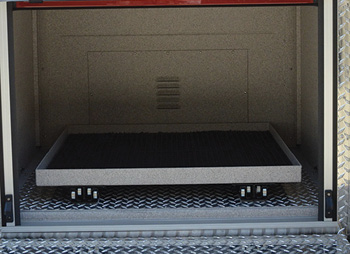 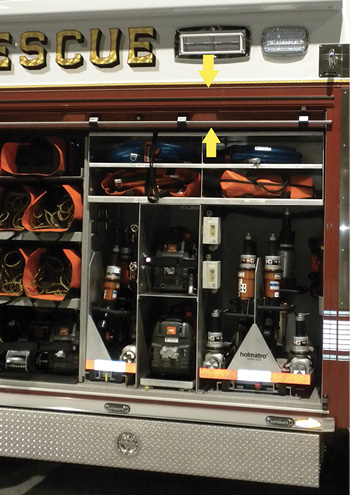 2 The height of a slide-out tray’s floor from a compartment’s floor is contingent on the manufacturer and rating of the slide mechanism. Two of the three trays on this rig have higher ratings than the third. The usable height of a compartment with roll-up doors is to the level of the door in the raised position. (Photo by author.)

Specification writers should realize that when unclear language is used in purchasing specifications, it may become part of a legally binding contract. Bidders are obligated to meet the written word or take an exception to the requirement. In competitive bidding environments, especially in political subdivisions, dimensional data and descriptions must be quantifiable to be evaluated and compared. Dimensions either meet the minimum requirements specified or they don’t. Whether they do or do not may end up being judged in a court of law, where there may not be any wiggle room.

Some salespeople may kiddingly say to themselves: “Are they going to believe what I tell them or what they actually see with their own eyes?” A statement from the movie “Shooter”: “The truth is what I say it is.” They should tread carefully. Some advertising and recommended purchasing specification verbiage intentionally enhances a product. Purchasing specifications should accurately define quantifiable and measurable requirements that can be compared and evaluated for compliance. Be fair—it is egregious to use ambiguous terminology with multiple interpretations to claim an unproven value or to specifically eliminate competition. That’s just not right.

A catch word recently seen in advertising and apparatus specifications is usable. It is defined as “fit for use; convenient to use and capable of being used.” What is usable to Merriam-Webster’s Dictionary may not be usable to firefighters riding the load. Defining and proving usable are no different than attempting to define heavy duty, severe service, low hosebed, FDNY hosebed, an extreme service bumper, or a Boston bumper. Good luck. 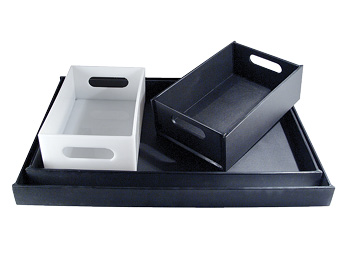 3 Purchasers shouldn’t build a million-dollar fire truck around existing and easily replaceable custom-size boxes regardless of if they are made of poly, aluminum, or stainless steel. (Photo courtesy of ProPoly.) 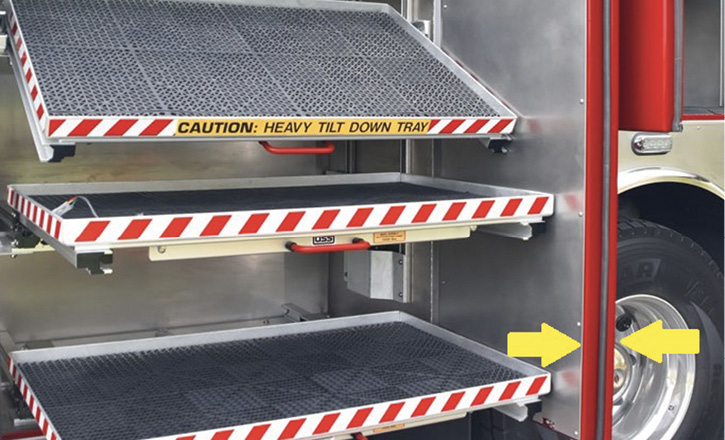 4 Dual 2-inch-thick vertically hung hinged doors look impressive and “heavy duty”; however, they can reduce the usable width of a slide-out tray by the thickness of both doors. (Photo by author.)

In my opinion, a compartment is usable when a firefighter can remove whatever primary piece of equipment is required without having to bend it, twist it, or tilt it. It should come straight out and concurrently go straight back in. That makes the firefighter’s job easier—something purchasing agents and specification writers ought to consider. (Swing-out tool boards, slide-out tool boards, and pull-out and tilt-down trays, while advantageous, are not part of this narration.)

Simple examples can often explain the confusing: A fire department writing specifications for a new rig owns a box of rocks 30 inches wide, 28 inches high, and 24 inches deep that takes up about 11½ cubic feet. Its favored apparatus manufacturer’s advertised compartment has just over a 17-cubic-feet capacity—35½ inches wide by 30 inches high by 28 inches deep. The department thought its box of rocks would fit inside a compartment with one-third more capacity than the box. The department used the manufacturer’s recommended specifications and purchased the rig.

After the contract was signed, the dealer advised the department that the advertised compartment width was just an interior measurement. The clear door opening width was actually 29½ inches. Why? There’s a 2½-inch door jamb on each side of the opening. The fire department said no problem, it would work around it. After all, the dealer was the department’s friend. The department ordered a new custom-built nonreturnable box from a local supplier. It was 27½ inches wide, which allowed one-inch clearance on both sides.

At the preconstruction meeting, the department was told the new box wouldn’t fit because the actual usable door width was 26½ inches. Why? The tracks for the roll-up door took up 3 inches. The department wasn’t happy but reluctantly ordered another box 24½ inches wide.

During the factory prepaint inspection trip, one of the troops measured the compartment height. It was 30 inches high as advertised; however, the roll-up door and its drip pan hung down 7 inches from the compartment ceiling. The department members were aggravated but the dealer was still their favorite so they let it go and ordered another new box 22 inches high—an inch lower than the door roll’s drip pan.

Just before delivery, the department added a slide-out tray on the floor of every equipment compartment. After they were installed, the dealer called: “That slide-out tray has the slides mounted under the tray, which means the tray will be raised up 3 inches from the floor.” The department was now beyond aggravation: “Why didn’t you tell us that when we ordered the trays?” The local supplier was happy to get another order for another custom-built box—this time 19 inches high. The department wanted the whole episode to be over. It wasn’t.

After the rig was delivered, the latest ordered box came in. It didn’t fit. It was one inch too long. The apparatus manufacturer’s standard practice was to keep the model slide-out tray installed back three inches—instead of two inches—from roll-up doors in the closed position. Why? The unlocking lever was on the front of the tray. The local vendor who supplied the custom-made boxes for the fire department was elated with the latest order for a 23-inch-long box. The fire department was not.

The story didn’t end there. The captain in charge of the engine company that received the new rig called the chief: “Hey, Chief, that box only holds half the rocks we’re supposed to carry. What do we do now?”

When equipment does not fit in a compartment as intended, who gets the blame? Apparatus purchasing committees should be very specific in detailing “what is going where” and “how it will be carried.” Likewise, dealers and their sales staffs must be upfront and candid with prospective purchasers. Apparatus salespeople are obligated to educate purchasers when appropriate.

Relationships between “good friends” who sell fire trucks and those who purchase them must be businesslike and professional during the entire specification writing and bidding process. A requirement not in writing does not legally exist. Clear door openings don’t always mean the same thing to each manufacturer. Manufacturers may not advertise if interior compartment dimensions are void of interference from body structural cross members, shelving tracks, shutter door rolls, drip pans, and hinged door hardware. It would be unfortunate if an otherwise qualified and low bidder who honestly “tells the truth” about his compartment’s dimensions is penalized and has his proposal rejected for being “noncompliant.”

Why would a fire department’s purchasing specifications stipulate interior compartment dimensions to the hundredth of an inch yet not specify the real dimensions of the shelves and trays that actually have to carry the equipment?