Centreville, New Brunswick, is four miles from the Bridgewater Crossing on the Canadian-American border to northeastern Maine’s Aroostook County. Located in the small village of less than 600 inhabitants is Metalfab, Ltd., also known as Metalfab Fire Trucks, a privately held corporation by owner and president Gordon Green.

Donald Green founded the company. His son Gordon became president in 1995. At that time, the ownership was Donald; his sons Gordon, Alan, and Eric; and his daughter Crystal. In 2009, Gordon purchased the company from his siblings. Eric still works at Metalfab. Alan has a fire truck parts company and Crystal has a graphics company—both of which do work with Metalfab.

About four dozen people work at the 35,000-square-foot Central Street location where Metalfab was founded to provide custom metal fabrication, welding, and machining for local businesses. There are two buildings. After fabrication and upfit are completed in the original building, apparatus are stripped and sent across the street to the newer building, where they are painted and reassembled in the final finish area. About a dozen units can be in progress at one time.

A quarter of the staff are volunteer firefighters. Like many builders, Metalfab entered the apparatus business by fabricating a tanker for the local community. By 1977, apparatus manufacturing became a significant part of the business. In excess of 90% of sales are fire apparatus or related equipment with more than 1,100 units sold in the Maritime Provinces of New Brunswick, Nova Scotia, Prince Edward Island, and Newfoundland and in the northern New England states.

1 The 1967 International Tanker is Metalfab’s first apparatus build delivered to Centreville, New Brunswick, and later sold to Lakeville, New Brunswick, which returned it to Metalfab when Metalfab built it a new rig in 2004. It was refurbished in 2017 for its 50th anniversary. The Freightliner is a 1,050 Imperial gpm × 1,200 Imperial gallon also delivered to Centreville. (Photos courtesy of Metalfab.)

3 This unique 2,500 Imperial gallon tanker on a two-door tandem axle Spartan chassis with just a portable pump is the second such design built for the Township of Severn, Ontario.

Yearly sales: “About 40 units with most sold factory direct in the maritime provinces. Sales in the remainder of Canada and the northern New England states are through dealers. Approximately 10% of yearly sales are in the United States.”

[From ULC’s Web site: “Underwriters Laboratories of Canada (ULC) is an independent product safety testing, certification and inspection organization. We have tested products for public safety for 100 years and we are accredited by the Standards Council of Canada.”]

Metalfab: “ULC S515 and NFPA 1901 closely mirror each other with few differences. Currently, the main difference is that ULC S515 doesn’t call for the seat belt indicators and data logger. ULC S515 third-party testing is more involved than the NFPA’s.”

Service: “In-house production staff and bays will be used as required. On road service—3 persons as required. When apparatus are sold through a dealer, the dealer is the initial point of contact for service work.”

Stock and demo apparatus: “We generally have at least one stock/demo unit per year.”

“Rural departments tend to purchase commercial chassis. A growing number will initially look to purchase a custom but, due to budgetary reasons, they often opt for the commercial. City departments prefer custom cabs and chassis. Some use customs for engines/pumpers and commercials for tankers/tenders.

“Most Canadian departments prefer transfer (crosslay) hosebeds as opposed to preconnects in the main hosebed. The norm is crosslays in the traditional location above the pump area. A large percentage of departments are opting for speedlays mounted lower to the chassis frame either ahead of the pump area, integrated into a walkway on transverse pump panels, or in front bumper mounted trash lines.

“The majority of pumpers in Canada have at least one large-diameter hose (LDH) discharge. It has been traditionally 4-inch, but an increasing number of departments are going with 5-inch.

“The apparatus in both countries are very similar. The main difference is some Canadian units may have additional options in terms of heating and heat retention due to the colder climate.”

Is “low bid” more important rather than compliance to technical specifications?

Metalfab: “Going with the low bid is a common occurrence when the purchasing authority is not the same people as the individuals who prepared the technical specification. This is especially true when the benefit and reason why some options were requested aren’t clearly stated and defined to the purchasing authority. The chance of the low bid price being chosen over the bidder’s compliance to the technical specifications is considerably lower when the differences and consequences of varying from the requested specifications to the safety of the firefighters and dependability/longevity of the fire truck itself are clearly identified.” 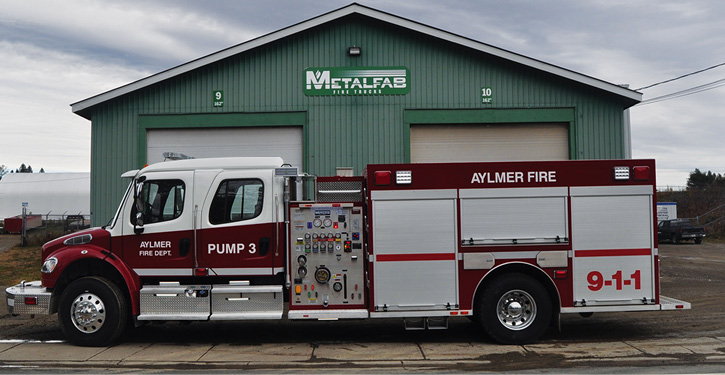 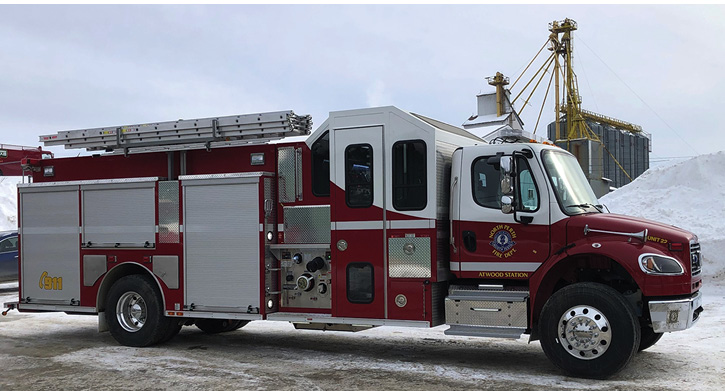 5 One of two built for North Perth, Ontario, is this 1,050 Imperial gpm × 700 Imperial gallon pumper on a Freightliner chassis with Metalfab’s TME Pump House option. 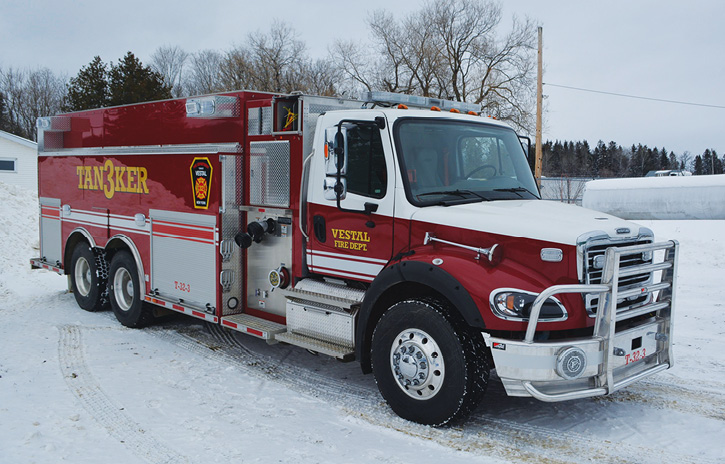 Metalfab: “Our H.E.A.T. (Highly Ergonomic Apparatus Technology) concept is a line of pumpers focused on firefighter safety. Typical H.E.A.T. features include locating the pump controls and gauges in the front body compartment while inlets/discharges are located exterior of the compartment forward of the body. This allows the pump operator to be distanced from the hose connections. It keeps the electronics located away from the weather and water by being inside the compartment. And finally, it also allows the crosslays to either be lowered forward of the body or to be located above the pump in a speedlay option.

“Ladders are located under the water tank, allowing them to be enclosed and to be lower for easier access. H.E.A.T. units are custom designed to the specific requirements of each customer. They aren’t predesigned; they are totally customizable.”

Metalfab: “Our SMOKE series, larger than a mini pumper and smaller than a full-size pumper, is a fully maneuverable first-out unit with a higher angle of departure and greater equipment capacity than a mini pumper. It is more affordable than a full-size pumper. It would be compliant to either ULC S515 or NFPA 1901 as an Initial Attack/Mini Pumper. It features an all-treadplate body. An option is painted smooth plate.”

In reviewing Metalfab specifications, change orders to the purchasing document specifically indicate when the change order was made, who made it, where it was made, and the method of communicating the change to Metalfab. “Paint sample approved by _____ by e-mail on 10/10/2020” and “Location was approved by _____ at preconstruction meeting on 10/10/2020.” Accountability during the entire fire apparatus specification, purchasing, and building process is an excellent idea.