Dan Kreikemeier said the Danko Emergency Equipment story would not be complete without first explaining the relationship between the Kreikemeier and Smeal families of Snyder, Nebraska.

Dan started employment with Don Smeal in 1960, manufacturing bulk feed delivery trucks and derricks for the water well industry. The families developed a close working relationship when building the first Smeal aerial in 1963. Don built the units and Dan did the sales and marketing. The first rig had a 45-foot aerial ladder, a 350-gallon-per-minute (gpm) PTO pump, a 1,200-gallon water tank, and a four-person enclosed crew cab on a conventional chassis.

After it was delivered to their hometown, a fire truck division was established in the Smeal company. Dan was the apparatus division foreman and began selling tankers called the “Volunteer” to rural districts in Nebraska, South Dakota, Kansas, and Iowa. 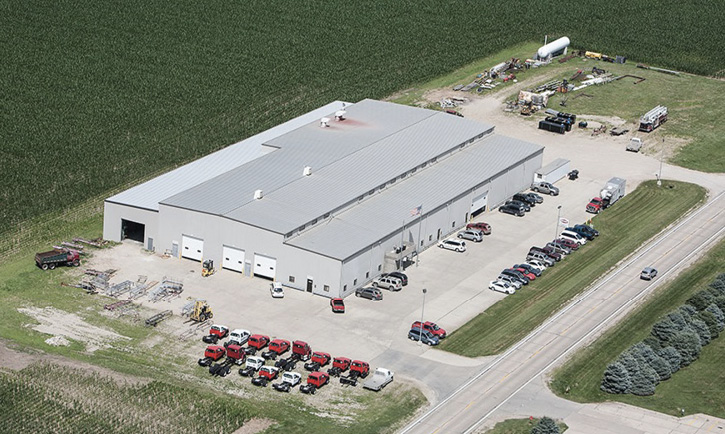 1 Danko’s 35,000-square-foot building opened in 2002 for its apparatus division. (Photos courtesy of Danko.)

2 This short-wheelbase Side Kick 750-gpm, 2,000-gallon pumper-tanker was delivered to the Allen (NE) Fire Department on a two-door Freightliner chassis. It features a three-section extension ladder and an over-the-pump panel compartment for SCBA on the left side. It is one of Danko’s more popular products. 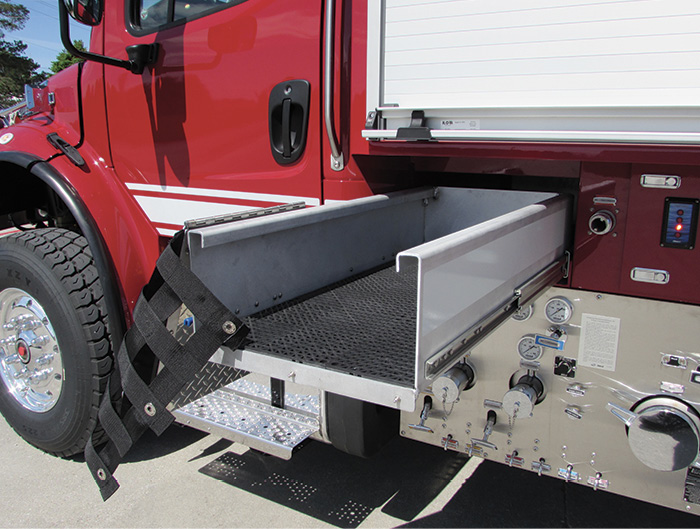 3 The half-crosslay preconnect on a slide-out tray was designed by Danko specifically for Side Kick pumper-tankers.

4 The Dodge City (KS) Fire Department received a 1,000-gpm, 3,000-gallon four-door dual-axle Freightliner pumper-tanker with three crosslays over a conventional midship pump and a unique compartment configuration on the left side.

In 1965, they sold their second aerial ladder, a 65-footer on an existing cab and body. In 1969, they sold a complete Smeal 65-foot aerial and body, followed by more aerials in the 65-foot and 75-foot range to the Kearney (NE) Fire Department.

The 105-foot aerial was developed by Don Smeal and sold on a custom chassis in 1981 to the Vermillion (SD) Fire Department.

In 1983, Don landed a contract with the largest fire truck manufacturer at the time to sell 75-foot and 105-foot aerial ladders, which was a handshake agreement that lasted until 1992.

In the early 1990s, it was decided to establish separate identities so there was no doubt who built what. The entities of Smeal Fire Apparatus and Danko were created.

Smeal later became one of several apparatus builders purchased and consolidated by a large manufacturing corporation—which itself was absorbed by another larger corporation.

Danko remained a family-owned business focusing on the development of apparatus meeting the specific needs of its customer base—the rural, wildland, and urban-interface market.

Half of the 60 employees are craftsmen and technicians, with the rest in sales and support. Ten people on the sales staff average more than 21 years of experience in the fire service or emergency equipment industry.

Jeff Wegner is director of sales and marketing, Dave Knobbe is apparatus sales manager, Keith Jacobsen is service manager, and Nicole Godwin is the service coordinator.

Knobbe creates quotes for Danko units for the outside sales team and handles sales outside of the 5-state region as direct accounts.

Wegner is responsible for the outside sales representatives as well as all the marketing functions from design to implementation. Wegner has consolidated the Kreikemeiers’ comments into his commentary below.

Danko’s equipment division is in three adjoining buildings on Ash Street in the Village of Snyder. The apparatus division is located a half-mile away outside the village on East 4th Street in a 35,000-square-foot facility. Opened in 2002, it houses apparatus manufacturing and apparatus sales departments, accounting, service, and parts. The original manufacturing facility on Highway 79 is used for storage.

There are inside and outside sales forces. All but one of the outside sales staff are full-time, selling both ancillary equipment and apparatus.

Wegner: “This is a large part of our business. Bruce Kreikemeier runs the equipment division, ensuring we have the right firefighting products at the right price. He coordinates with the equipment manufacturers and manages the in-house equipment staff.” 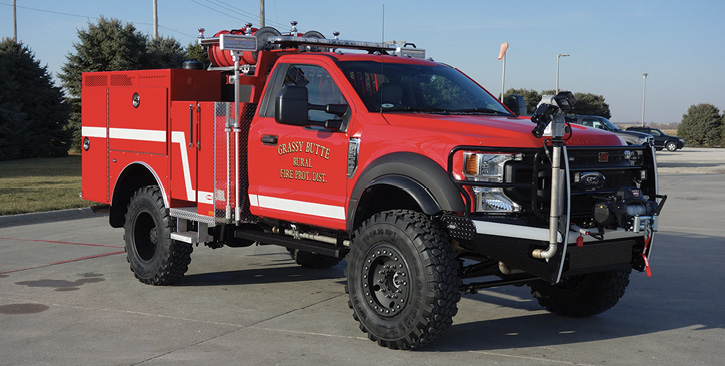 5 This Ford F350 Wildland grass truck with twin booster reels, 400-gallon tank, and Waterous 2515 75 gpm at 135 psi and 150 gpm at 90 psi portable pump was delivered to the Grassy Butte (ND) Rural Fire Protection District. It has a winch and monitor mounted on the front bumper extension.

6 Seven electrically controlled discharge valves and a deck gun were supplied on this Danko four-door 1,250-gpm, 250-gallon mini-pumper built for the Birmingham (MI) Fire Department. It has an onboard foam system and a large, recessed LED scene light on each side.

7 The Paola (KS) Fire Department had Danko construct this 1,500-gpm, 1,000-gallon pumper-rescue on a four-door Freightliner chassis. An enclosed preconnect compartment is on the front bumper with a swiveling elbow mounted on the apron. 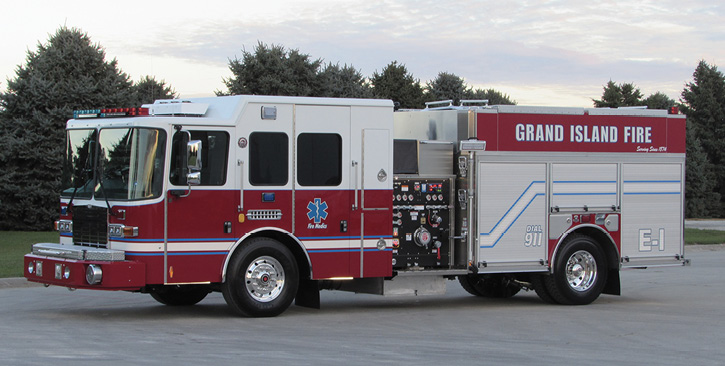 Danko carries a full line of accessory equipment literally running from A (Akron) to Z (Ziamatic). Its equipment catalog can be downloaded from its online store at https://store.danko.net/.

Wegner: “Service bays at the factory have dedicated staff that ONLY performs repairs and service work so as not to interfere with production. We have several mobile service units with service technicians. We recently built two mobile pump test trailers, so that workload will be increasing. The mobile EVTs also perform ground ladder testing, air bag testing, service of apparatus, breathing air compressors, and many other products. Plus, we have support staff in the parts department. The in-house team performs predelivery inspections on all apparatus we manufacture and sell.”

An average of 40 to 45 complete rigs and more than a hundred skid units are produced yearly. When asked about stock or demo trucks, Wegner replied: “We try, but many times they get sold before we can utilize them as demo units.”

Wegner: “Every substructure, carrier, or tank cradle gets galvanized. Dielectric barriers insulate the galvanized substructure from the aluminum body.”

The primary marketing territory for Danko manufactured apparatus includes Nebraska, Iowa, Kansas, South Dakota, and Missouri. Danko apparatus sold outside of those states are factory direct or via a Representative of Record (ROR) program. Any dealership can sell a Danko product if it is the ROR for that particular account. A few rigs are sold internationally.

Wegner: “We began representing Maintainer Custom Bodies (MCB) in 2004. They are a good fit for us with rescue trucks, as we easily outsell our production capabilities. They also manufacture larger rescues that we prefer not to. With the recent acquisitions and consolidations of apparatus manufacturers, it was beneficial to offer our customers a single sole-source manufacturer of custom chassis fire apparatus that builds their own aerial devices and custom cabs. HME-Ahrens Fox fit that bill and we picked up the line in 2018. They build a great product utilizing stainless steel, which is beneficial here in the Midwest where there’s a lot of corrosive material on the roads in the winter months. Their exclusive use of stainless-steel complements our exclusive use of aluminum, giving us a comprehensive product line for the customers in our territory.”

The use of multifunction apparatus is not limited to suburban and urban fire departments. Using his own department as an example, Wegner said, “We cover 110 square miles. It’s almost 14 miles to the farthest point, which means we are 14 miles from the closest hydrant. It is critical for a rig to be used as a tanker, but in some situations the same rig is required to perform as a pumper.

“A popular and unique product is Danko’s pumper-tanker featuring the Hale Side Kick 1,000-gpm pump module. While 1,000 gpm does not sound like much, in many rural applications shuttling water, some departments are hard pressed to maintain a 250-gpm continuous flow.

“The Side Kick installation features a side-mounted pump below the chassis frame, enabling the booster tank to be extended forward, allowing better front-to-rear weight distribution. Because there is no actual pump house, a multitude of options are available for exterior compartmentation and equipment storage. We’ve delivered pumper-tankers with up to 2,000-gallon tanks on single-axle chassis and usually 3,000-gallon tanks on dual-axle chassis. We could do up to 4,000. They are fully compliant with NFPA 1901, Chapter 7 Mobile Water Supply Apparatus. Configurations for pumper-tankers with the Side Kick are only two doors. If we build a unit with a standard midship pump module, we could do 4-door cabs and [we] have.

“Basically, it is a tanker with ground ladders, more compartment space, a hosebed, a 1,000-gpm pump, and a couple of preconnects meeting NFPA 1901 requirements for a pumper. A lot of departments purchase them for the primary use of a tanker but can classify them as a reserve pumper for better ISO ratings. It is that whole multipurpose concept of doing more with less.”

Danko’s Web site proclaims: “We service what we sell” and “We serve you … so you can serve others!” Wegner added: “Being a family-owned business, we treat our customers just like another member of the family.”