The pressurized water extinguisher (aka: PWC or The Can) has been used in the American fire service since it was first introduced sometime around 1818. Although it has gone through several changes since its introduction, the concept has basically remained the same.

I’ve been a member of the fire service since around 1982, and what I know as a PWC hasn’t changed at all. Typically, it’s a stainless-steel tank that holds roughly 2½ gallons of water, with a screw-on lid that houses a small-diameter rubber hose, an air fill chuck like those found on vehicle tires, and an air pressure gauge.

These types of fire extinguishers are found in schools, hospitals, businesses, and other structures and are employed in numerous applications throughout the fire service. Many urban fire departments still use these pressurized water cans on their first-due rigs, with a riding assignment known as “the Can Man.”

This piece of equipment is often one of the first through the door of a structure fire, while attack lines are being deployed and charged. These cans are very portable and can be recharged easily and quickly on scene.

One of the drawbacks of these extinguishers for firefighters has always been the nozzle or tip design. Without belaboring the point, the tip allowed only for a straight stream of water, which caused us to have to put a gloved (or ungloved) finger into the stream to allow for the water to be dispersed more efficiently. This practice is second nature to most of us; however, it is not ideal. Gloved fingers that disrupt the straight stream never really create the same dispersion pattern twice. It also makes for a waste of some of those 2½ gallons of tank water. 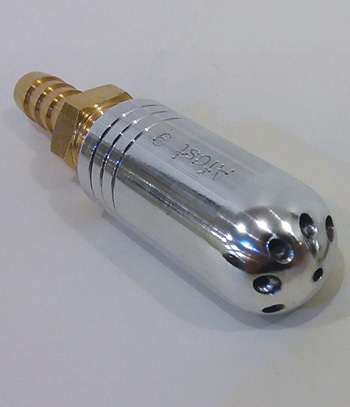 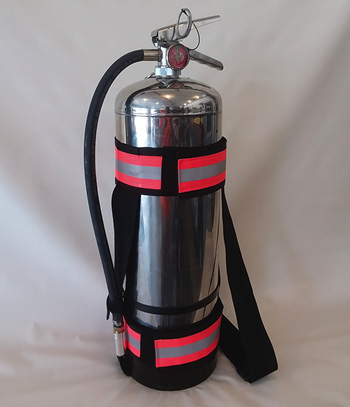 With the advent of encapsulator agents (Google it, it’s not a foam), the pressurized water can has become even more invaluable. In addition to how the Can Man uses a PWC at a structure fire, rescue crews on extrication scenes now have (with an encapsulator agent mix) a quick, easy, effective, nontoxic, and biodegradable firefighting tool that works on Class D (combustible metal) fires as well as lithium-ion battery fires.

Company founder, inventor, and Chief (Ret.) Dion LeMieux says: “Unlike the traditional OEM plastic tip found on PWCs (which routinely break), the AFAST 9A is made entirely of metal (brass and aluminum). These nozzles can be retrofitted in house in less than 5 minutes or can be purchased as a hose and nozzle assembly” (photo 1).

The 9A looks a bit like a very large-caliber bullet at first blush (photo 2). Notice that the holes in the tip will create a much more consistent spray pattern without the need for a finger for help. AFAST’s patented nozzle tip works with plain water, and it enhances the action of encapsulator agents.

It’s no secret that I am a proponent of encapsulator agents. I have used them (primarily in PWCs) during my 30-plus-year tenure in the racing industry since I was first introduced to them in the late 1990s.

Having thoroughly tested these AFAST 9A nozzles myself, I would have loved to have had them for use on the cans at our super speedways. They are literally a point-and-shoot adjunct for pressurized water cans (photo 3). I never noticed that they drained the cans any faster than with the stock nozzles, and they certainly are much cleaner, easier, and more efficient than stock.

In addition to the AFAST 9A is a version of the same nozzle that fits Indian Wildland Pump Packs. This version is known as the AFAST 9B, and it provides all of the same benefits of the 9A in wildland pack pump form. The end dispersion field of the 9B is right at two feet wide, without diminishing the “throw” of each manual pump action. The AFAST line of nozzles can be found at www.A-Fast1.com or by e-mailing afastnozzles@gmail.com.

Here’s an added bonus for these tips that we are using routinely now. With on-scene decon becoming more commonplace, we have found that using a 2½-gallon PWC with a 3 percent encapsulator solution and the AFAST 9A tip, we can do a fast and nasty (yet wildly effective) quick hose down of members’ turnout gear prior to doffing.

The solution decontaminates by encapsulating hydrocarbon-based contaminants, and the spray pattern of the 9A nozzle provides great decon coverage that can’t be had with the OEM tip of a PWC.