The Holbrook (NY) Fire Department is one of the more progressive fire departments on Long Island when it comes to training, apparatus purchasing, and overall operations.

When it came to purchasing a new tower ladder for the department to replace an aging 1997 Duplex/LTI, the truck committee went all out to get the best type of apparatus that would fit the department’s needs.

Former Captain Matt Bacile, who was captain while the department planned for the new unit, states the department usually tries to replace an existing apparatus every 20 years. Like most other fire departments across the country, other financial issues took precedence over this purchase and it was delayed.

“We were starting to have mechanical issues with the old truck as well as problems obtaining parts for repairs,” Bacile says. “Because of these issues, we knew we had to replace the old truck sooner than later. Our committee consisted of a chief, captain, lieutenant, and our fire district mechanic who started the process of writing specs and looking at various manufacturers that had delivered other ladder towers on Long Island in 2019. Plus, we had to wait for a bond issue to pass for the purchase.”

Bacile adds the purchase of the new aerial was completed using the Houston-Galveston Area Council (HGAC) process, which made the bid process much easier and allowed the department to select its manufacturer of choice.

“During the process, we looked at all manufacturers and went through all the pros and cons of each manufacturer and their respective apparatus models,” Bacile says. “We went through their likes and dislikes with their new rigs. We eventually settled on Seagrave. Our department has a Seagrave engine and a 75-foot quint that we have had for a few years now. They are virtually never out of service for any mechanical issues and reliability has been great. This made things a great deal easier for our committee to choose the type of vehicle that we needed and that would operate well in our response district.”

Bacile says the firefighters appreciated the simplicity of the new Seagrave unit, including the self-leveling outriggers, which provided a quicker setup time deploying the boom.

“We especially like the maneuverability and the turn angles, which work well around our fire district,” he says. “We have some tight streets and areas we have to operate in, so this factor was important to us.”

Bacile says the new unit has better acceleration than the older rig and has more safety features, such as an anti-roll system and passenger compartment air bags. 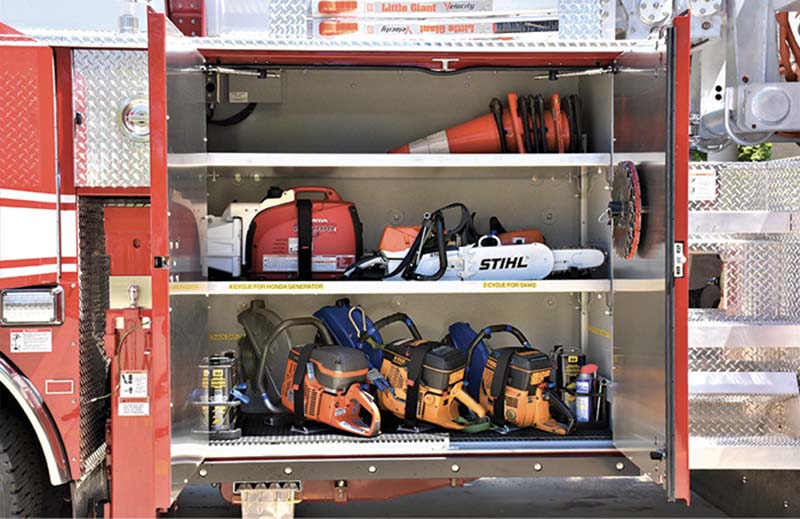 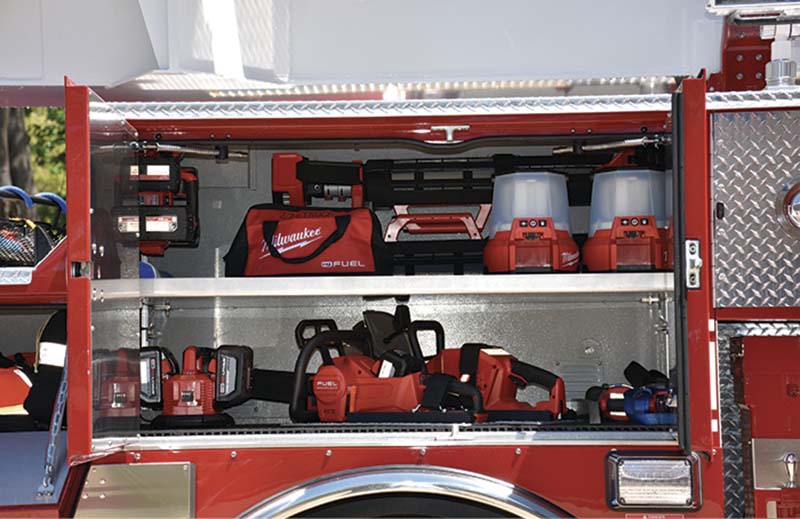 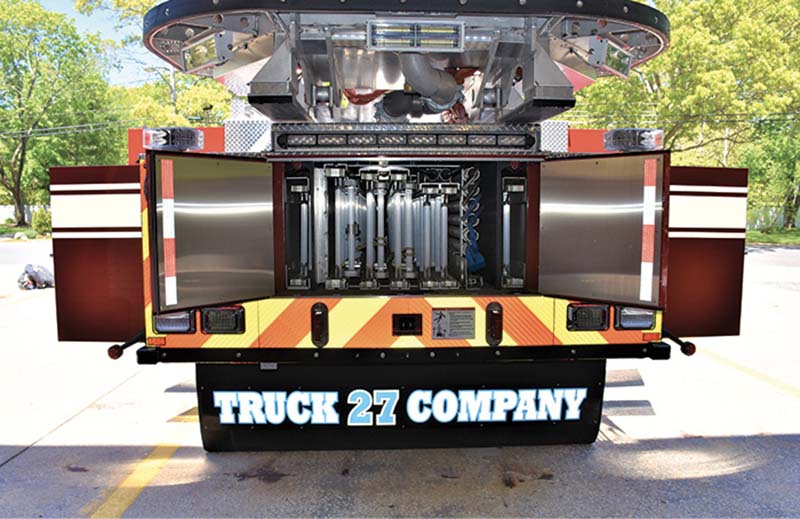 “The newer rig has a lot more compartment space, more seating room, for our firefighters,” he says. “We can carry more ground ladders. The lift capacity of the bucket is greater, and it flows a great deal more water from the bucket. These are all attributes of the new Aerialscope that we all liked.”

Bacile said the local dealer, Rescue Vehicles Inc. (RVI) in Bohemia (Long Island), NY, and Seagrave worked with the department from start to finish, including having all the tools mounted at the dealer, which saved the firefighters time. He adds that service after the sale is also important to the department. 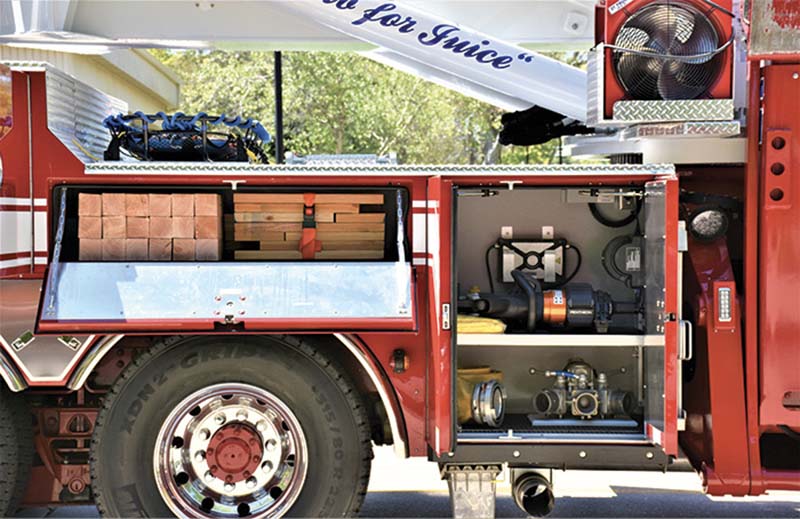 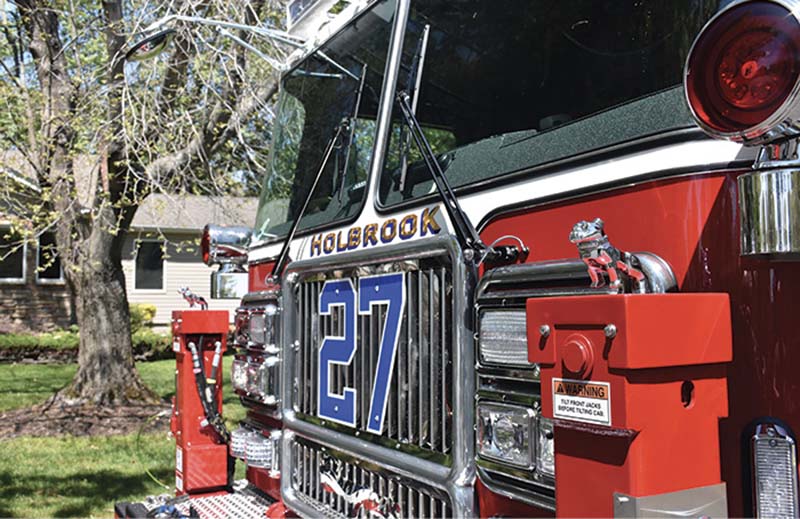 6 Mack Bulldogs from a 1973 Mack Aerialscope that was operated by the department adorn the front of the new apparatus.

“We trained with the vehicle for a few months before we put it in service after training from Seagrave,” Bacile says. “We wanted all of our chauffeurs to be fully versed in all operations of the vehicle as well as being able to operate in and around our response district.”

Holbrook firefighters trained on various commercial buildings around town to learn how the new apparatus performed and to see how far the boom and bucket would reach.

“This proved to be really important to us before we put the vehicle into service,” he says. “Everyone who operated this vehicle now has a great deal of expertise in knowing how we could or could not operate safely in certain areas or on certain commercial buildings around our response district.”

The Holbrook Fire Department covered all the bases with this new apparatus purchase. Members looked at all other deliveries in their area as well as the pros and cons of their neighbors’ vehicles. They settled on a manufacturer that they had good relations with and reliability in past vehicle purchases.

The operation and maneuverability of the vehicle was also a concern of theirs as well as the safety features, larger seating capacity, and ability to carry more ground ladders.

Writing specifications for a ladder truck in these times is a daunting task and the purchase is expensive. Make sure you design your new apparatus for functionality as well as the ability to be driven around your response district. Don’t forget the weight of equipment carried, and make sure it fits in your fire station.